Alkanes or Paraffin are saturated hydrocarbon or organic compounds having the general molecular formula CnH2n+2. The entire molecule of alkanes consists of carbon and hydrogen atoms with single covalent chemical bonding. They are mainly two types, open-chain alkanes, and cycloalkanes.

It occurs in natural sources like natural gas, mineral oil, and petroleum oils. Paraffinic or paraffin wax made from saturated hydrocarbons or alkanes is used for the preparation of candles, wax paper, polishes, cosmetics, electrical insulators, perfumes, and medicine.

The alkanes contain sp3 carbon surrounded by the hydrogen atom. In learning chemistry, the simplest alkane like methane all four hydrogen atoms are equivalent in their structure.

The higher member of the alkanes or paraffin family contains zigzag chain structures in organic chemistry or chemical science. 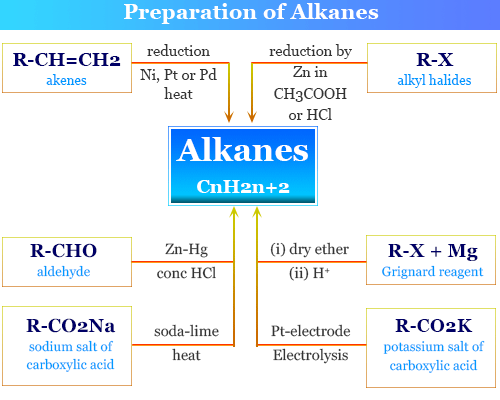 The saturated hydrocarbons alkane or paraffin are prepared by different synthesis methods or from chemical compounds,

Reduction of an alkyl halide by dissolving metals like zinc in acetic acid or hydrochloric acid, zinc in sodium hydroxide, and the zinc-copper couple in ethanol uses for the preparation of alkane.

Reduction of aldehyde in the presence of Zn-Hg in hydrochloric acid gives alkanes.

How to make paraffin wax?

After the removal of volatile compounds from crude petroleum oil, the residue contains a paraffinic or paraffin base. The low boiling hydrocarbons are separate as individual hydrocarbons like methane, ethane, propane, etc.