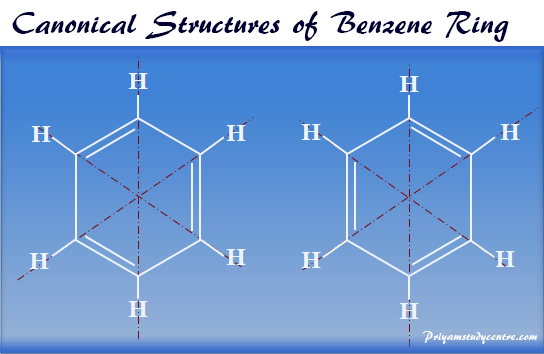 The aromatic hydrocarbon benzene was first isolated by Faraday in 1825 in cylinders of the compressed illuminating gas molecule from the pyrolysis of whale oil.

If a hydrogen atom in the benzene ring is substituted by another atom or group, this molecule acquires bond polarity. Examples of such benzene derivatives which show dipole moment are chlorobenzene, nitrobenzene, phenol, benzyl alcohol, etc. 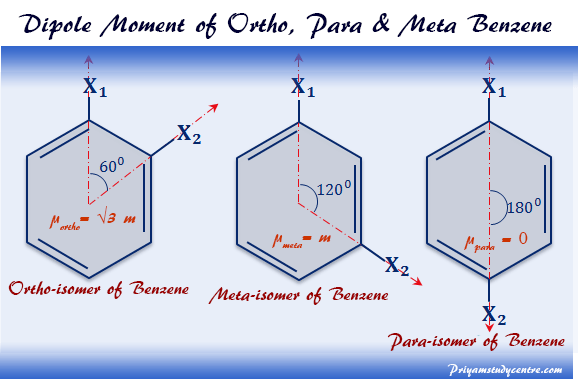 When one group or element introduces into the ring, only one product is produced. The ortho, para, meta, or o, p, m isomers are formed by the introduction second group in the benzene ring given above the picture.

The dipole moment of ortho isomer of benzene molecule will have the highest value and p isomer has the lowest value equal to zero like methane.

Dipole moment and structure of molecules

The resultant dipole moment of molecules is equal to the vectorial sum of individual bond or group moments. It depends on the structure of the molecules.

The dipole moment of the di-substituted molecules like xylene, dichlorobenzene, and dinitrobenzene can be calculated by the vectorial addition formula,
μ2 = m12 + m22 + 2 m1m2 cosθ
where m1 and m2 are individual group moments
θ = angle at which m1 and m2 are inclined to each other

Ortho, para, and meta-xylene are the substituted derivatives of benzene having the molecular formula C6H4(CH3)2.

Similar way, we can calculate the dipole moment of o, p, and m-dinitrobenzene or dichlorobenzene.

1, 3, 5 trinitrobenzene being symmetrical non-polar molecule. When it is dissolved in benzene, a charge transfer bonding involves some kind of donner acceptor interaction.

Due to the formation of charge-transfer complexes in the C6H6 solution, the compound shows a significant dipole moment.

Problem: Why p-dinitrobenzene has μ = 0 but para – dihydroxybenzene μ ≠ 0?

Among these two substituted molecules, the dipole moment of p-dinitrobenzene is zero but the p-dihydroxybenzene molecule is polar.