What is renewable energy? 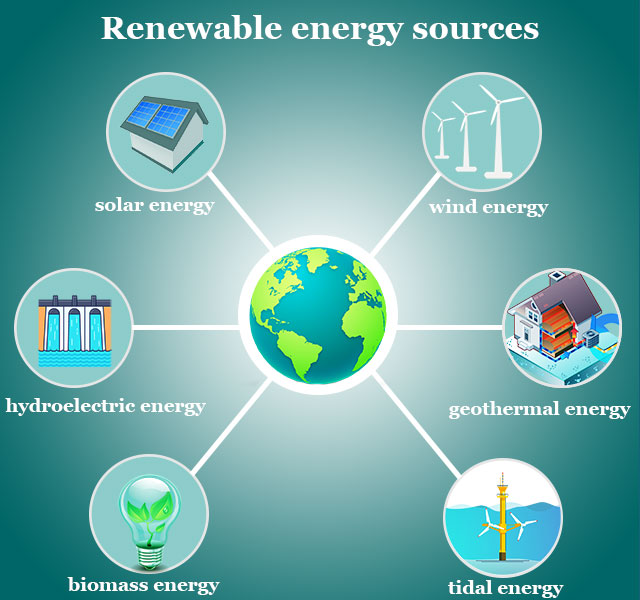 All sources of renewable energy are not beneficial for the earth’s environment and they are also very expensive to use. For example, hydroelectric energy and biomass energy can affect the living of wildlife. It creates different types of climate change in our environment. The energy comes from non-renewable sources emitted carbon dioxide, sulfur dioxide, and other pollutants in our enviorment.

The energy comes from fossil fuels like coal, petroleum, and natural gas or hydrocarbons are used mainly to generate electricity. These are the main non-renewable energy resources of the world.

Due to limited resources of non-renewable energy and the large demand for electricity, these resources do not meet the global demand in the middle of the century. Therefore, we need to grow renewable energy resources like hydroelectric, wind, solar, biomass, and geothermal energy.

The combustion of fossil fuels also has a negative effect on our earth’s environment. The burning of fossil fuels (coal, wood, oils, and natural gas) in power plants or engines of vehicles emits different types of air pollutants.  The pollutants like carbon monoxide, carbon dioxide, nitrogen dioxide, sulfur dioxide, unburnt particles of matter, and toxic chemicals or heavy chemical elements like mercury, chromium, and arsenic impact negatively on our environment.

The emission of these pollutants causes acid rain (responsible for water pollution and soil pollution), the greenhouse effect that causes global warming.

The main examples of renewable sources which we used widely in our daily life included, 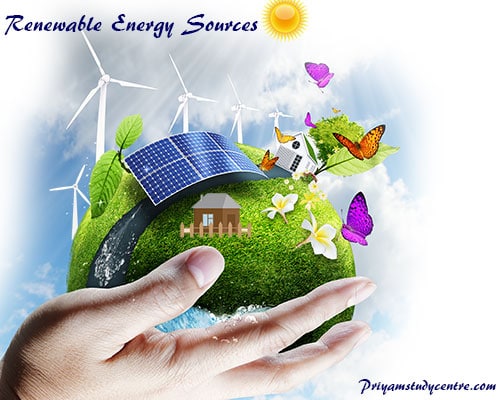 Different types of such renewable resources and their advantages are given below the topics,

Due to many advantages, about 71 percent of renewable energy comes from hydroelectric power plants. United States, Canada, Brazil, China, and Russia are the leading hydropower producer in the world.

It also negatively affects our environment. For example, large dams can affect our river’s ecosystem and harm the life of humans and animals.

Water reservoirs or dams are not only the source of hydroelectric power. Different types of tidal, and wave energy projects around the world generate electricity for global demands.

Less than one percent of renewable power (about 500 megawatts) comes from marine projects around the world. The United Kingdom is the leading country in the wave and tidal power generation process. The world-first marine energy test faculty was established in 2003 by the United Kingdom, Scotland, and European Marine Energy Centre (EMEC).

Wind energy or wind power is the renewable source of electricity produced from the wind turbines of our globe. Recently due to limited resources of fossil fuels and increasing global pollution, we increase the capacity of wind energy in the world.

Solar energy is the cleanest source of energy obtained from radiant light (electromagnetic spectrum radiation). The heat from the sun by using different types of technologies like photovoltaics, solar heating & cooling, and concentrating solar power. It converted solar power into thermal and electrical energy.

Germany, Italy, Chana, Japan, and the United States are the largest producer of solar renewable energy in the world due to their technologies and geographical location. The energy comes from solar technologies free from pollution. We used solar energy for different types of domestic and commercial purposes such as generating electricity, providing light, and heating water.

Present-day, different countries of the world use solar technologies due to saving their environment from pollution. It is also used due to limited resources of fossil fuels like coal, petroleum, and natural gas.

Biomass uses by people since the first burning of wood for cooking or warming the environment where they live. Biofuels (alcohol and biodiesel), wood and wood waste, biogas like methane from landfills, and municipal organic wastes are the main source of biomass energy. Like renewable solar energy, biomass is also used for producing electricity, heating water, uses as fuel for vehicles.

Due to renewable sources, geothermal energy is useful or significant to fulfill huge electricity demand in countries like Iceland, El Salvador, New Zealand, Kenya, Philippines, and more than 90 percent of heating demand in Iceland.

More than 20 percent of the power demands of 30 counties of the world are fulfilled by renewable energy. Iceland and noway generate all the electricity from renewable sources such as solar, wind, hydroelectric, geothermal, and biomass energy.

Many countries of the world set up the goal to reach 100 percent renewable energy for their power demands in the future to save our enviorment.

What is heat capacity? Heat capacity (Specific) of gases is defined as the amount of heat required to raise the temperature of one gram of...