Due to the presence of a double bond or olefinic bond, alkenes have participated in a wide number of chemical reactions.

They are colorless and odourless in nature but ethylene faintly sweet odour.

Alkenes containing two to four carbon atoms are gases. Five to seventeen are liquid but greater than eighteen are crystalline solid at room temperature. The alkenes are insoluble in water due to their nonpolar properties.

Why alkenes are called olefins?

The name of unsaturated hydrocarbon alkene comes from ethylene. Ethylene is called oil forming or olefiant gas. It forms an oily liquid when treated with chlorine or bromine. Therefore, these classes of organic compounds are called olefinic compounds.

Heat of hydrogenation and stability of alkenes

The heat of combustion only compares the stability of different alkenes which produces the same alkanes on hydrogenation.

Stability of alkenes by steric effect

Enthalpy of formation of alkenes not purely addictive properties. Therefore, the stability of alkenes depends on the steric effect or hyperconjugation.

Three n- butylene gives the n-butane on reduction. The order of stability of these butylene isomers, trans-2-butene > cis-2-butene > 1-butene.

In cis-2-butene, the two methyl groups in the cis isomer are closer together than in the trans isomer. Therefore, cis-2-butene experiences greater steric repulsion. Consequently, the cis-isomer has a greater strain than the trans-isomer. Due to steric destabilization, the stability order of n-butylenes is trans-2-butene > cis-2-butene.

Stability of alkenes by hyperconjugation

Since trans-2-butene is the most stable isomer, it follows that hyperconjugation has a greater stabilizing effect than steric repulsion.

Heat of combustion and stability of alkenes

Owing to the presence of a double bond, the alkenes undergo a large number of addition reactions but under special conditions, they also undergo substitution properties.

The high reactivity of alkenes is due to a double bond or olefinic chemical bond that contains π- electrons. Addition properties occur due to a change of trigonal arrangement to the tetrahedral arrangement or formation of saturated hydrocarbon.

Isomers that have the same structure but differ in their spatial arrangement are called stereoisomers. They are two types, optical and geometrical isomerism.

Many alkenes have one double bond and exist in two forms, cis and trans-form. Many physical and chemical properties of cis and trans-alkenes differ widely. Van’t Hoff suggested that if we assume there is no free rotation about a double bond or functional group, two structural arrangements are possible for the molecules.

Why there is no free rotation around a double bond?

If we assume two unsaturated carbon atoms are sp3 hybridized with excited-state electronic configuration 1s2 2s1 2px1 2py1 2pz1. They are joined by two banana bonds with a maximum overlap of orbitals. To decrease such overlap, bond energy must be supplied to break the chemical bond. The fact restricted the free rotation of double bonds.

If we assume sp2 hybridization, of two unsaturated carbon atoms, the double-bonded pi-orbitals are maximum overlap. It causes to resistance the rotation of double bonds in alkenes.

Due to the presence of π-bond, alkenes are participating in a large number of organic reactions. Some important chemical reactions are given below the picture. 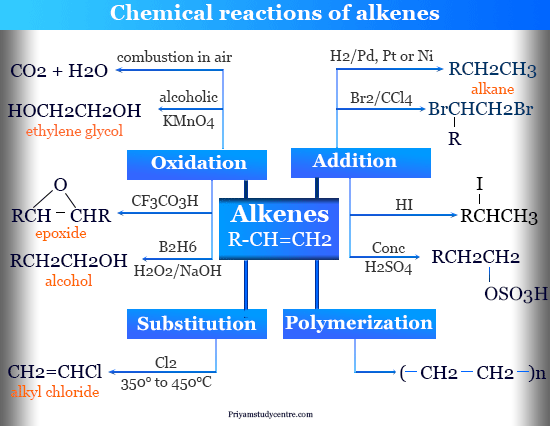 Alkenes are readily hydrogenated under pressure in presence of a chemical catalyst.

For hydrogenation of alkenes at room temperature, we used finely divided platinum or palladium, or Raney nickel. Nickel can be used under 200 °C to 300 °C.

When the alkenes are the type of R2C = CR2 or R2C = CHR, the hydrogenation under the above conditions is difficult. For hydrogenation of such types of alkenes, we used sodium in ethanol or lithium aluminum hydride.

Alkene has properties to form addition compounds with chlorine or bromine. For example, ethylene adds bromine to form ethylene dibromide. 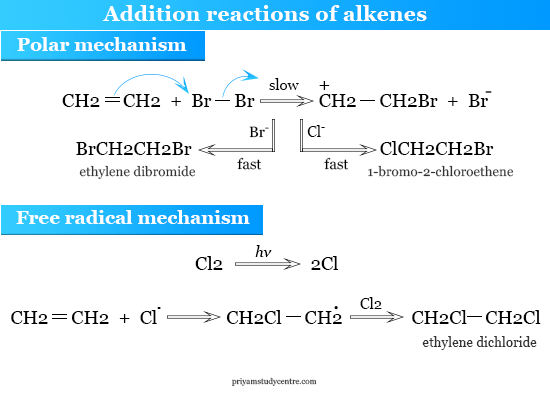 Halogen addition or halogenation of alkenes takes place by

Halogen addition radially occurs in the solution. In the absence of light or peroxides (hydrogen peroxide), it is catalyzed by inorganic halides like aluminum chloride. These facts lead to the conclusion that the reaction occurs by a polar mechanism.

The free radical mechanism has generally been accepted due to the properties of the halogen addition to alkenes in the absence of light.

Stewart showed that the addition of chlorine to ethylene is accelerated by light. This suggested the free radical mechanism of alkenes.

Ethylene adds hydrogen bromide to form ethylene bromide. The order of reactivity of the halogen acids is, HI > HBr > HCl > HF (this is also the order of acid strength). The conditions for the addition are similar to those for halogens but the addition of hydrogen fluoride occurs under pressure.

In the case of unsymmetrical alkenes, the addition of the halogen acid takes place in two different ways. For example, propylene adds hydrogen iodide to form propyl iodide or isopropyl iodide. Markovnikov studied many halogen addition reactions of this type and formulated an empirical rule called the Markovnikov rule.

The negative part of the addendum adds to the carbon atom that is joined to the least number of the hydrogen atom. Therefore, propene reacts with halogen acid to form isopropyl halide.

Markovnikov’s rule is empirical but may be explained theoretically on the basis of the polar mechanism. The addition of halogen acid is an electrophilic reaction. Therefore, the proton adds fast, followed by a halide ion. The addition is predominantly in the trans position and this may explain by the formation of a bridge carbonium ion.

If we consider propylene, the methyl group has a +I effect. The π electron is displaced towards the terminal carbon atom and it acquires a negative charge. Therefore, the proton is added to the carbon fastest from the methyl group, and the halide ion then adds to the carbonium ion.

Alkenes may be hydrated to alcohol by absorption in concentrated sulfuric acid followed by hydrolysis. Ethanol is manufactured by direct hydration of ethylene with steam under pressure in presence of a phosphoric acid catalyst.

Acetylene Gas Acetylene or ethyne is a colorless gas with the general molecular formula C2H2 when combustion with oxygen to form a luminous smoky flame due...