What is water pollution?

According to the sources, water pollution can be classified into the following types given in the picture, 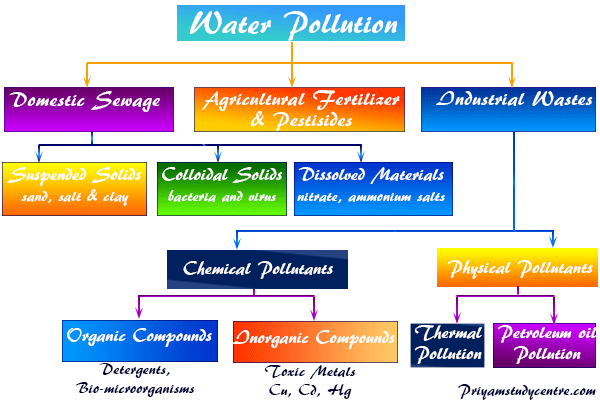 The oxidation process consumes large quantities of oxygen gas dissolved in water. The loss of dissolved oxygen from water causes water pollution to the death of fish and other aquatic life present in lakes, streams, rivers, and oceans.

The adverse effects of water pollution on human beings, animals, plants, and aquatic life are seen in several ways.

The wastewater coming from the chemical and fertilizer industry contains nitrate and phosphate compounds. It has harmful effects on human beings and aquatic life of rivers, lakes, or sea. The presence of fertilizers in the polluted water increases the growth of algae and other aquatic plants. The pollution containing nitrate salts is not fit for drinking by human beings. Therefore, we cannot be used such types of polluted water for drinking purposes.

Effects of acid rain on water

The air contains sulfur dioxide (SO2) that undergoes photolytic and catalytic oxidation to form SO3. SO3 and NO2 from our environment react with rainy water or moisture to form sulfuric or nitric acid rain. These are also the secondary facts which effects water pollution.

The disease producing microorganism that comes from the residents of a municipality are transmitted through water suppliers produces several types of diseases in living beings (animals or humans). It causes water pollution in our environment. Therefore several types of diseases such as dysentery, typhoid, cholera caused by microorganism are transmitted through polluted water.

Ground water is the main source of drinking water for many peoples. Many regions of the United States depend mainly on groundwater for their domestic supply. Due to several human activities, the groundwater gets polluted by dissolving toxic chemical elements, substances, bacteria, and viruses. Therefore, due to water pollution, safe drinking water is the most common problem in many cities in different counties like the United States, England, India, Germany, etc. People use water purifiers to survive the problems of water pollution.

Thermal pollution in our environment affects mainly the aquatic life of water. Heat can decrease the capacity of dissolved oxygen in rivers, lakes, or seas which increases the metabolism of fish. Some fishes cannot be alive with very low levels of dissolved oxygen. The main source of heat comes from the cooling water of power plants into rivers. The polluted water is much warmer than naturally occurring water bodies.

A large quantity of crude petroleum oil is spilled accidentally or intentionally into the sea water from the tankers (ships) or during the drilling operation causes water pollution in the sea. For example, the accidental leakage of 118,000 tonnes of crude petroleum oil from the big oil tankers (Torrey Canyon) into the water of the English Channel polluted the water of the surrounding area in a few hour’s time.

Effects of oil spills on the environment

The oil is lighter than water, oil forms a layer on the surface of the water which is called oil sticks. The oil spills prevented dissolving oxygen in the water which has adverse effects on aquatic life. Oil pollution effects the growth of plankton which disrupts the entire cycle of marine life or causes water pollution. Plankton is a layer of tiny animals and plants that live on the surface of the sea.

Water pollution in the ocean

The effect of global warming or climate change also reduces the dissolved oxygen in the ocean’s water. Due to ocean water pollution, some coastal areas formed dead zones where the dissolved oxygen is very low levels. Therefore, most of the higher forms of aquatic or water life is vanish. The Gulf of Mexico is the largest dead zones (22,730 square kilometers) in the world.

What is soil pollution? Soil pollution or soil contamination is a part of land degradation caused by acid rain, excess and wrong use of agricultural...