What is ozone gas?

Ozone gas is a triatomic allotrope of oxygen with the molecular formula O3. It is an important constituent of the upper atmosphere where the ozone layer is formed by solar uv radiation of very high energy. 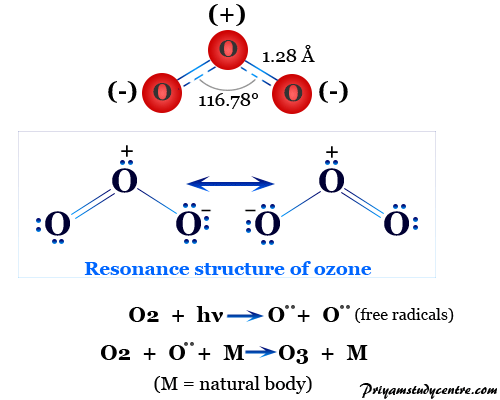 It is a toxic blue gas freezing to a purple solid at −193 °C. It is one of the strongest oxidizing agents that oxidize silver (I) to silver (II). It is used for converting alkenes or olefins into aldehydes, ketones, or carboxylic acids.

It may be observed that the nitrogen dioxide and chlorine atoms are continually regenerated which causes to damage the O3 balances in the upper atmosphere.

Ozone has a planar structure with O-O-O angle equal to 116.78° and O-O chemical bond lengths equal to 1.28 Å. The central oxygen atom in the molecule is sp2 hybridized with one lone pair.

The valence bond theory describes the two resonating forms of O3 molecule, each has a single bond on one side and a double bond on another side. It is a polar molecule with a dipole moment of 0.53 D.

Ozone is a faint blue colour gas with a typical pungent smell. It is slightly soluble in water but more soluble in non-polar solvents like carbon tetrachloride.

It may be formed artificially or naturally. The stratospheric ozone layer is formed naturally through the interaction of solar ultraviolet (uv) radiation with molecular oxygen (O2).

Artificially, the gas may be prepared by the silent electric discharge of oxygen and streaming out the gas quickly to avoid conversion.

It was also obtained by the anodic oxidation of a concentrated aqueous solution of perchloric acid at 50 °C. Pure ozone gas may be obtained by fractional distillation of a blue liquid mixture of O3-O2.