What is acid rain?

Acid rain or any other form of precipitation that causes mainly by pollutants like sulfur dioxide or nitrogen dioxide has adverse effects on the environment or humans. Nitric acid or sulfuric acid rain comes down in the environment by raindrops, snow, fog, hail, or even dust. 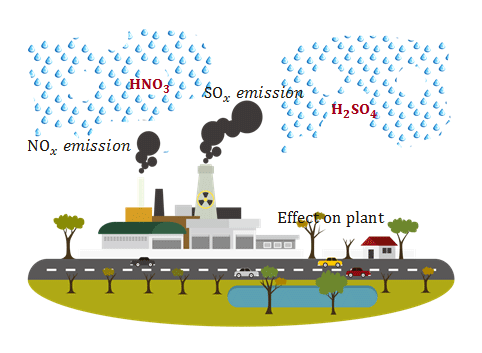 It can adverse effects on plants, aquatic life, soil, and archeological specimens like bridges, stone buildings, and statues of our environment.

Most of the water has a pH scale range between 6.5 to 8.5 but the pH value of acid rain is less than that of such ranges. Acid rain causes several types of pollution such as soil pollution and water pollution in our enviorment.  Therefore, we need to find scientific solutions to minimize the effects of such types of pollution caused by acid rain.

It is formed mainly by the emission of SOx and NOx from different types of sources like coal, oils or automobile engine burning, etc.

Natural rainwater is also slightly acidic (pH scale = 5.6) because it contains some atmospheric carbon dioxide. It reacts with water to form the carbonic acid solution.

Sulfur dioxide is partial oxidation to form sulfur trioxide in the air by the photolytic or catalytic process initiated by ozone gas, hydrocarbon, nitrogen oxides, and soot or dust. This sulfur trioxide reacts with rainwater or moisture and gives sulfuric acid.

This acid comes down the atmosphere in the form of sulfuric acid rain or acid snow. It causes mainly water pollution and soil pollution.

The smoke released by the automobile’s engines contains nitrogen dioxide that causes acid rain and the greenhouse effect. This smoke is obtained by the thermodynamic combustion of petrol or diesel in different types of engines. Many chemical plants like explosives or nitrogenous fertilizers production plants produce nitrogen dioxide.

The nitrogen dioxide produces from the above sources reacts with the rainwater or moisture in the presence of oxygen or ozone to form nitric acid rain or snow.

Effects of acid rain on the environment

It serves many harmful impacts on animal, plant, and fish life.

Effects of acid rain on humans

How to reduce nitrogen dioxide levels?

Nitrogen dioxide can be controlled by reducing with air in the presence of the platinum catalyst produces nitrogen and ammonia molecules. Therefore, before this enters the atmosphere this process may be applied.

How to remove sulfur dioxide from air?

The density of sulfur dioxide decreases by treating the flue gases with the slurry of calcium carbonate which absorbed the SO2 gases due to the formation of CaSO3. But the process is quite economical.

Sulfur dioxide may also be reduced partially by desulphurization of coal and Naptha or using natural gas in place of coal. But this technical information for the solutions of acid deposition facts is not fully utilized in practice due to many causes.

What is methane gas? Methane gas (chemical formula CH4) also called marsh gas is the simplest hydrocarbon compound of the alkanes or paraffin with a...