Sulfur also called sulphur is the nonmetallic chemical element of Group 16 or VIA (Chalgens family) of the periodic table with symbol S and atomic number 16. It is used widely for manufacturing sulfuric acid in the chemical industry. 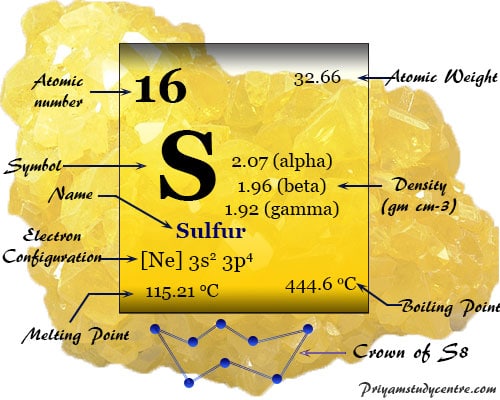 In chemistry, except for gold and platinum, it reacts with most of the elements to form a large number of metallic and nonmetallic chemical compounds.

The outermost quantum shell consists of an s2p4 electronic configuration with a vacant d-orbital. Due to the presence of vacant d-orbital, it shows different oxidation number or states in different types of chemical compounds. The most common oxidation states are −2, +4, and +6.

Some physical and atomic properties of the sulfur are given below the table,

Sulfur on the periodic table

Sulfur is placed on group-16 (VIB) of the periodic table. It is the group member of the oxygen, selenium, tellurium, and polonium group. They are collectively called Chalcogens. 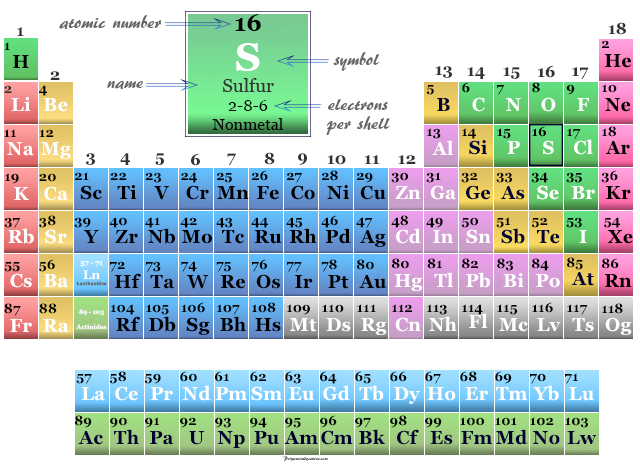 In 1809, the French chemists Louis-Joseph Gay-Lussac and Louis-Jacques Thenard suggest the presence of sulfur in nature. It has four stable isotopes, 32S, 33S, 34S, and 36S.

The outermost quantum shell consists of an s2p4 electronic structure with a vacant d-orbital. The element can use their vacant d-orbitals for the chemical bonding purposes giving the valences 2, 4, and 6.

The element is just two electrons short of the next noble gas configuration which can be achieved mostly by forming covalent bonding.

Why sulfur is a non-metal?

The ionization energy is generally high and decreases down the group of the period table. The normal trend of the metallic character increases with the increasing atomic number.

Therefore, among the group 16 family, oxygen and sulfur is nonmetal, selenium, and tellurium are metalloid or semiconductors and polonium is a metal.

Where is sulfur found?

It is the tenth most abundant chemical element in the earth’s universe, which is known from ancient history. Sulfur is found in many common minerals like gypsum (CaSO4, 2H2O), galena (PbS), pyrite (FeS2), and cinnabar (HgS).

It also occurs as hydrogen sulfide in natural gas, oil, and organosulfur compounds in coal.

The native sulfur is found in many places on the earth and many organic compounds like hair, wool, egg albumen, garlic, onion and mustered.

Today, nearly 25 percent of the element is produced from natural gas, oil, and ores containing sulfur materials. It is usually lifted from underground deposits by the Frasch process.

Three concentric pipes are sunk into the sulfur layer of the earth (150 to 200 meters below the surface). The element is melted by superheated water and forced upwards by the air compressor for the extraction of the element.

Sulfate ores like gypsum are treated with carbon to produce metal sulfide. The metal sulfide reacts with the acid to form hydrogen sulfide which converts sulfur by the self-reduction process.

Recently, a large scale of sulfur is extracted by the natural gas refinery process which contains 15 to 20 percent of hydrogen sulfide. The hydrogen sulfide absorbed in monoethanolamine follows by partial oxidation.

The element is produced by self-reduction between H2S and SO2 over Fe2O3/Al2O3 chemical catalyst at 300 °C.

A million tonnes of the element is found in the United States and Japan which is recovered from the removal of sulfur from crude oil. It can be removed from crude oil by treating crude oil with an alkaline solution of sodium plumbite to decrease air pollution.

The allotrope contains a parked ring of 6 to 20 atoms. The allotrope practically differs in different types of packing units and varying repulsion between lone pairs of electrons on neighbor atoms.

What is rhombic sulfur?

What is monoclinic sulfur?

The monoclinic form is obtained by the crystallization of molten sulfur at about 100 °C, followed by rapid cooling to room temperature.

A third crystalline solid variety, the γ-monoclinic form is obtained from hot concentrated solutions of sulfur in CS2 or ethyl alcohol or by slowly cooling molten element at about 150 °C.

The cyclo S6 species, also called Engel’s-sulfur, was prepared by Engel in 1891 by adding hydrochloric acid to a saturated solution of sodium thiosulfate at 0 °C.

Viscosity of sulfur with temperature

The viscosity of transparent yellow liquid first decreases with increasing temperature but after 159 °C, the viscosity rises steeply to reach maximum. Thereafter fall smoothly to the boiling point.

The changes are due to the breaking of S8 rings to diradicals with unpaired electrons in terminal S-atoms.

It combines with the most of periodic table elements to form many compounds in oxidation states −2, +4, and +6. It is the second element after carbon to exhibit catenation properties due to ring or chain formation.

Hydride, sulfides, oxides, oxoacids, and salts are the most common examples of sulfur compounds.

Hydrogen sulfide or sulfurated hydrogen is the most familiar hydride of sulfur formed by a direct combination of the element with hydrogen.

A large amount of hydrogen sulfide is obtained in the removal of sulfur from petroleum. It is widely used as a reducing agent in chemical laboratories.

Water formed by group-16 element oxygen is a liquid due to the existence of hydrogen bonding but hydrogen sulfide is a gas due to the absence of such bonding. It has a characteristic smell of rotten eggs.

All the metals (except gold and platinum) react with S to form metal sulfides. These are the ionic compounds containing negatively charged sulfide ions (S−2). The sulfide of iron, nickel, copper, cobalt, and zinc are the important ores of the respective metals.

SO2 and SO3 are the main oxides of sulfur prepared by heating the element with air or oxygen. The oxides are soluble in water to give sulfurous and sulfuric acid.

Sulfuric acid is an important chemical and major pollutant that causes air pollution, soil pollution, or acid rain in the earth’s environment.

It reacts with fluorine to form sulfur hexafluoride (SF6) which is used as an insulator in the electric device. It is an important constituent of plants and animal bodies.

Many proteins and amino acids like cysteine, cystine, and methionine contain S-atom. It involves many important metabolic reactions of the living organism.