Greenhouse effect and global warming mean increasing the global temperature of the world which trapping specific heat from the earth’s surface by mainly carbon dioxide and other gas molecules like methane, CFC, ozone, etc. It warming the earth’s atmosphere and causes climate change. 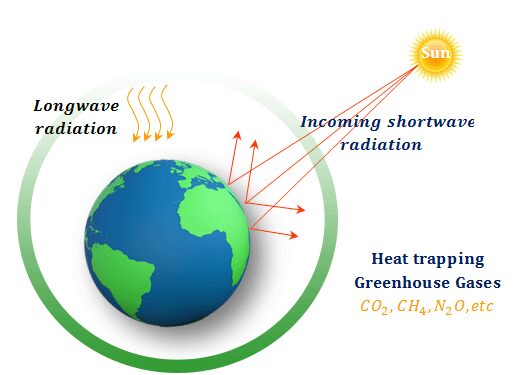 The contribution and effect of different greenhouse gases are different and their solutions to save our environment from global warming are the challenge today.

What is greenhouse effect?

The name greenhouse effect comes from the fact that used in horticulture for the upbringing of green plants in the small glasshouse whose walls and roof are made of glass-sheet.

The glass sheet and roof of the house allow the short wavelength of heat that comes from the sunlight to go into the greenhouses freely and trap this heat coming from objects in houses. These traping of heat or infrared radiation increases the temperature inside the greenhouse. This is called the greenhouse effect.

How does the Greenhouse effect work?

The harmful electromagnetic spectrum like UV-light comes from sunlight shielding or absorbed by the ozone layer but visible or infrared rays pass through the layer and fall on the earth’s surface. Since the infra-red spectrum has the heating the earth and various particles of earth.

But the long wavelength of particles that comes from the soil, plants, and other contents of the earth does not allow it to go out from the earth’s atmosphere easily. Therefore, this trapping of heat or electromagnetic radiation raises the temperature of the earth’s surface.

The gases that trap heat or IR radiation that come from the earth’s atmosphere are called greenhouse gases in environmental chemistry or science.

The contribution to global warming of these gases is given below the table.

The rise in temperature of the earth’s atmosphere is very important for existence on earth. Because without heating the whole earth would be converted into a cold planet, consequently, we are not able to live a normal life.

What is global warming?

This too much rises temperature that melts snow mountains of our environment. It causes floods in the low-lying areas of our earth. Also changes the biological activity of oceans and the patterns of cropping. Therefore, the presence of excess carbon dioxide in the atmosphere brings about climate change.

What are the effects of greenhouse gases?

We have already said that air is pollution caused by the presence of greenhouse gases like carbon dioxide, nitrogen dioxide, sulfur dioxide, ozone, and unburn hydrocarbon, CFC, HFC, etc.

Some of the pollutants cause global warming but some cause soil pollution and water pollution through acid rain which decreases the pH scale of the earth’s soil and water. Therefore, we need proper solutions to decrease these pollutants.

What is renewable energy? Renewable energy sources such as hydroelectric, wind, solar, biomass, and geothermal energy are the main examples of naturally replenished energy resources...