What is manganese dioxide?

Manganese dioxide is a slightly brownish black solid with the chemical formula MnO2. It is the main source of manganese compounds and occurs in the earth’s crust as pyrolusite. Manganese dioxide is widely used in dry cells and the synthesis of organic compounds. It is insoluble in water and inert to cold dilute acids. It oxidizes concentrated hydrochloric acid and decomposes concentrated sulfuric acid and nitric acid on strong heating.
MnO2 + 4HCl → MnCl2 + 2H2O + Cl2
2MnO2 + 2H2SO4 → 2MnSO4 + 2H2O + O2 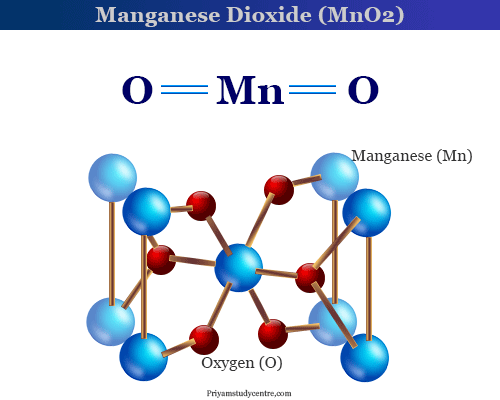 MnO2 has a rutile type structure at high temperatures but tends to be nonstoichiometric at ordinary temperatures when it becomes polymorphic.

Manganese dioxide is amphoteric in nature. It forms oxomanganate (IV) with fused alkali which have varied compositions.
MnO2 + CaO → CaMnO3

It is a stronger oxidant in an acid medium than an alkaline medium. It readily reacts with hot HCl by liberating chlorine gas. Careful heating MnO2 with other metal oxides gives manganites. It has different types of formulas, the simplest formula is MnO2MIIO or MIIMnO3.