Manganese is a chemical element or a greyish-white hard, brittle paramagnetic transition metal of Group 7 (VIIB) of the periodic table with the symbol Mn and atomic number 25. It is used mainly as an additive to steel. 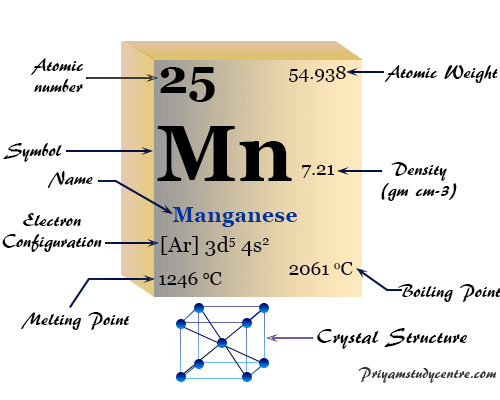 The metal was named in the Latin word magnesium from the old name pyrolusite.

It formed a body-centered cubic crystal lattice. The melting point and density of manganese are much lower than those of chromium suggesting more participation of d-electron in metallic chemical bonding.

The +6 oxidation number or state is familiar to us in the compound potassium permanganate, KMnO4, a strong oxidizing agent.

Manganese on the periodic table

It is placed in group 7 and period 4 with d-block elements in the periodic table. Manganese is a member of a transition metal that possesses the outer orbital electronic configuration [Ar] 3d5 4s2. 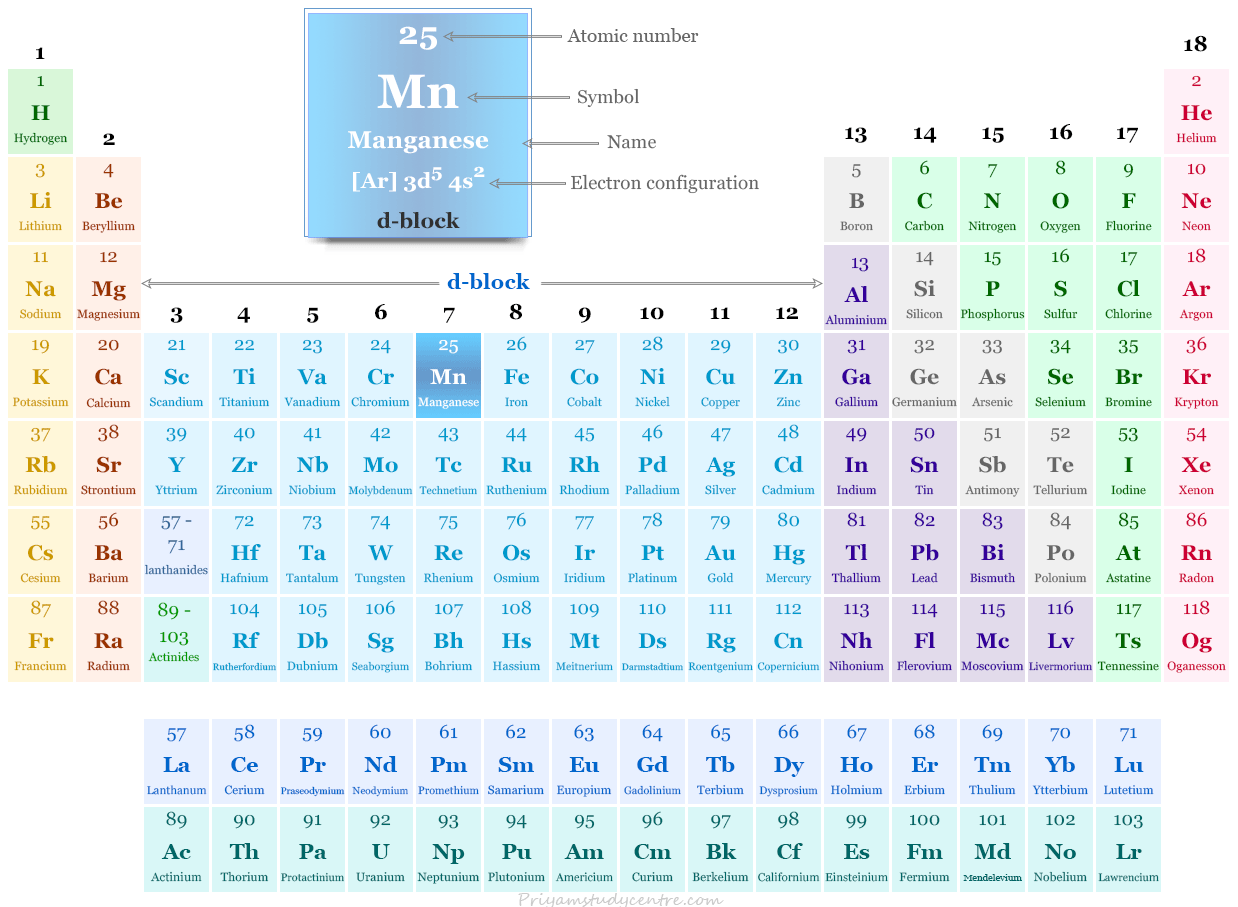 Where is manganese found?

It is the third most abundant transition metal after iron and titanium and the twelfth most abundant element among all periodic table elements. It occurs 1000 ppm in the earth’s crust.

Colloidal particles of manganese are found on the ocean floor to form compact Mn nodules. It contains 15 to 30 percent of metal on a dry basis with copper, nickel, and cobalt. More than 1012 tones of such nodules have already been accommodated from the ocean water bed. The large deposit of the elements may gain commercial significance in the future.

The transition element, manganese present in food plants and animal bodies and plays an important role in the biological process.

Naturally, occurring manganese has one stable isotope with an atomic mass of 55. It has several radioactive isotopes with atomic mass ranges from 44 to 69.

The element, manganese is produced by electrolysis of an aqueous solution of Mn (II) sulfate which is prepared from pyrolusite by heating concentrated sulfuric acid at 150 °C.

Alternatively, pyrolusite is heated below 800 °C with dehydrated green vitriol. In both techniques, manganese sulfate (MnSO4) is leached out from the residue by leaving impurities like iron oxide and other silicate compounds.

The Mn (II) sulfate was further purified by crystallization before subjecting electrolysis.

The greyish-white paramagnetic metal, manganese does not oxidize in a very pure form but the presence of impurities like carbon makes it more reactive.

It liberated hydrogen from all dilutes acids, including dilute nitric acid. The acids are reduced to form sulfur dioxide and nitrogen monoxide (NO).

The +2 oxidation state is most stable due to the presence of a half-filled d5 electron configuration. The reduction potential oxidation state diagram suggests that Mn (VI) is a highly oxidizing agent, that oxidizes to form Mn (III) and Mn (IV) ions.

Potassium permanganate is an important compound of manganese having the chemical formula KMnO4. Permanganate is familiar to us due to its strong oxidizing properties.

Permanganate ion is a very strong oxidizing agent in acid solution and moderately strong in the neutral and alkaline medium. Potassium permanganate is used as an oxidizer in analytical chemistry.

In the +7 state, the metal forms oxide like Mn2O7 and oxohalides MnO3Cl and MnO3F. The green oxide is highly explosive that ignites alcohol or ether when brought into contact.

Manganate ion (MnO4−2) is the only suitable representative in the +6 state of manganese.

It is obtained as a green mass by fusing pyrolusite with alkali. The green mass is extracted with water containing little alkali and the solution evaporated to yield dark green crystalline solid K2MnO4.

Pyrolusite or MnO2, a common mineral present in the earth’s crust, is the main source of the metal manganese. It is a slightly brownish-black solid mostly insoluble in water and inert to cold acids.

Hydrochloric acid and heated concentrated sulfuric or nitric acid are oxidized by MnO2. Manganese dioxide is an important compound of Mn, widely used glass industry to decolorize glass and in the manufacturing of matches box.

The +2 state is the most common and stable oxidation state of manganese to form a large number of binary compounds (oxides, halides) and complexes.

All four halides of manganese with the chemical formula MnX2 are stable compounds and isomorphous with the magnesium halides. The halides are conveniently prepared by reacting MnCO3 with the appropriate hydracids of fluorine, chlorine, bromine, and iodine.

The chemical equilibrium constants for the formation of these ions from aqua-ion are very low, which may again be attributed to the absence of any gain in CFSE.

The transition element, manganese is mainly used as an additive for making steel. Manganese combines with the sulfur present in steel which prevents the formation of brittle materials like FeS.

Due to their high strength, the manganese alloys have great industrial demand and are used for making railway tracks, safes, rifle barrels, crushing machines, drilling rods, and prison bars.

The other alloy that contains 17 to 19 percent chromium, 8 to 10 percent manganese, 0.75 to 1 percent copper, and small amounts of carbon and silicon has high corrosion resistance and chemical attack.

What is molybdenum? Molybdenum is a chemical element or strong and silvery transition metal of Group 6 (VIB) of the periodic table with the symbol Mo...