The mixture of CO and hydrogen is called synthesis gas. It is used for the production of various organic compounds.

Carbon monoxide is a very weak Lewis base but it acts as a strong ligand to transition metals. Nickel forms volatile Ni(CO)4 at ordinary temperature. Many other transition metals from a wide variety of carbonyls under different conditions.

Carbon monoxide has a total of ten electrons in the outer orbitals. On the hybridization model, we assumed both carbon and oxygen to have sp hybridized.

Another electron pair on the pz orbital of oxygen overlaps with the empty pz orbital of carbon to form the second π bond. The last one is the coordinate type bond.

The chemical bonding in carbon monoxide is best represented by the molecular orbital diagram given below the picture, 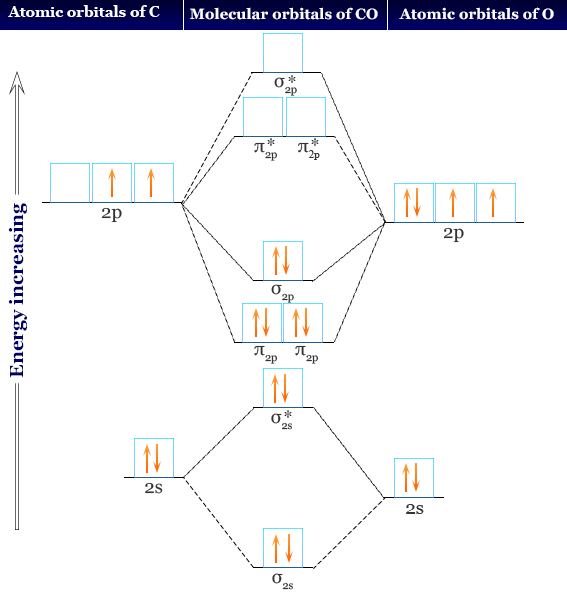 All the bonding molecular orbital in CO are filled. There are three antibonding orbitals of which spx is much higher energy. This particular molecular orbital is placed along C-O bond axis and is not accessible for back donation.

The other two molecular orbitals are available to metal for back donation. Since oxygen is more electronegative than carbon. Therefore, the carbon lone pair functions as a donner.

Carbon monoxide is an electron-deficient molecule and has π-acceptor properties. It is an ideal ligand for a low oxidation number or state of metal. CO is sparingly soluble in water and burns in air to form carbon dioxide with a blue flame.

It is extraordinarily poisonous. CO combines with the hemoglobin of blood. Therefore, it renders to carry oxygen by red blood cells. Some basic physical properties of carbon monoxide are given below the table,

It reduces many metal oxides. I2O5 reduces by CO to form iodine. This reaction may be used for the detection of carbon monoxide.
I2O5 + 5 CO → I2 + 5 CO2