Lithium is the lightest solid chemical element or alkali metal of Group 1 or IA in the periodic table with the symbol Li and atomic number 3. It is widely used for the production of good alloys with aluminum and magnesium. 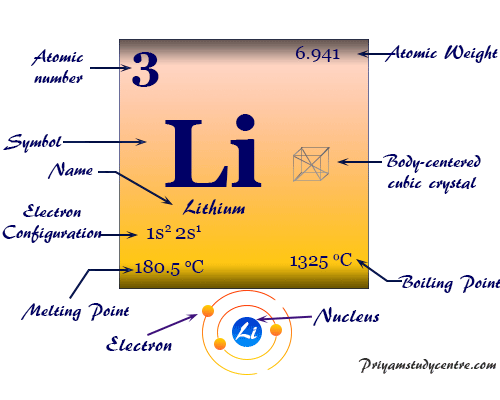 The systematic study of alkali metals (lithium, sodium, and potassium) in inorganic chemistry describes their physical and chemical properties. These can be readily understood by the outer electronic configuration.

The electron configuration of the lithium atom is 1s2 2s1. Therefore, the only 2s1 electron of the metal takes part in metallic bonding.

All the alkali metals give characteristic flame due to easy excitation by electromagnetic spectrum with the following colour,

This fact of alkali metals developed the analytical method for precise estimation by flame photometer.

The large difference between the first and second ionization energy of lithium suggests that the preferred oxidation number or state of metal will be +1. It is preferred to form chemical compounds by ionic chemical bonding in chemistry.

Lithium in the periodic table

Lithium is placed in group 1 and period 2 of the periodic table. It is an s-block element that lies between hydrogen and sodium. 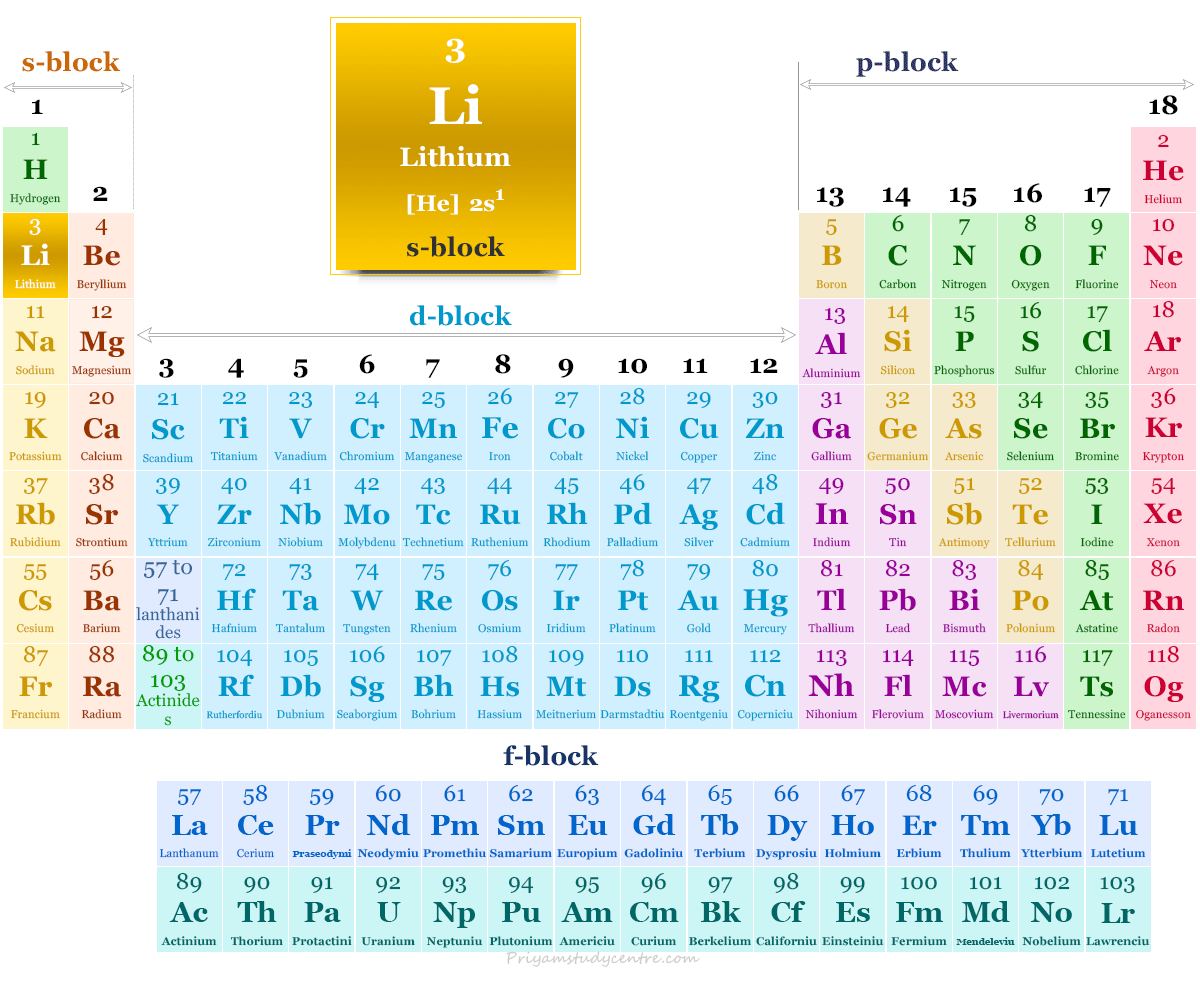 Lithium was discovered by Swedish chemist Johan August Arfvedson in 1817 in the mineral petalite. The name was chosen from Greek later lithos means stone. It occurs in crustal rocks (18 ppm) comparable to gallium (18 ppm) and niobium (20 ppm) in the earth’s environment.

Where is lithium found?

Aluminum silicate is the main mineral. It occurs in two forms,

It is found mainly in the United States, Canada, Brazil, Argentina, the Soviet Union, Spain, and Congo.

The very low terrestrial or cosmic abundance of lithium compared to other alkali metals describe by its small nuclear charge and low potential barrier. It may facilitate nuclear reaction to heavier elements like beryllium or boron.

It also occurs in many springs and some radioactive decay minerals like carnallite, ashes of planets, in taboo, milk, and blood of living animals.

In the 19th century, the United States was the largest producer of chemical elements and compounds like Li2CO3. In this century, Australia, Chile, and Portugal are the largest commercial suppliers of the metal or its compound.

The alkali metals beings most electropositive and have never been found in nature in elementary states. Due to electropositivity, alkali metals readily react with water and cannot be produced by electrolysis. Therefore, fused chloride and hydroxide are used for the preparation of lithium and sodium.

The major commercial form of the metal Li2CO3, is produced from ores or brines by different processes and uses largely in the chemical industry. About 1000 tonnes of lithium metal and several thousands of salts are prepared annually for various purposes of use.

The large difference between the first and second ionization energy of lithium suggests that the preferred oxidation state of the metal is +1 oxidation. The major chemistry of metal is described by the Li+ ion.

In solution, the Li+ ion stabilizes by high solvation energy. The reactivity of the alkali family increases from Li to Cs, except for nitrogen molecules.

At 25 °C, water reacts with Li very slowly, sodium reacts vigorously, and potassium, rubidium, or cesium reacts with an explosion.

It is burnt in air or oxygen to form Li2O and a trace amount of Li2O2 but it reacts with nitrogen slowly at room temperature and rapidly to give ruby red crystalline solid Li3N.

The poor reactivity of the element is also illustrated by the fact that lithium cannot replace weekly acidic hydrogen from phenyl-acetylene but other alkali metals liberate hydrogen from this chemical compound.

The properties or behavior of lithium and its compounds differ significantly from other alkali metals. The properties of Li resemble magnesium due to the diagonal relationship in the periodic table.

Many simple salts of metal are normally hydrated and anhydrous salts are hygroscopic in nature (LiCl, LiBr, LiI, etc). The structure of LiClO4, 3H2O, and Mg(ClO4)2, 6H2O are similar in nature, both contain octahedral groups.

The electrode potential for the redox reaction of lithium has the lowest value due to the highest ionization energy and small size of the atom.

What is lithium used for?