Ultraviolet visible spectroscopy or uv-vis spectroscopy involves the measurement of absorption or transmittance of energy in the ultraviolet and visible regions of the electromagnetic spectrum. It is primarily used to measure the multiple chemical bonding in organic compounds and colour of transition metals. The absorption of such type of species process in two stages. In the first stage, M + hν → M∗. Ultraviolet visible spectroscopy involves the excitation of the species by absorption of photons with a limited lifetime. In the second stage, M∗ converting to a new species by photochemical reaction.

Absorption in the uv-visible region leads to the excitation of bonding electrons. Therefore, the absorption peaks can be correlated with the kind of bond that exists in the species. Hence absorption spectroscopy in Ultraviolet visible region is valuable for the characterization of functional groups in organic molecules. 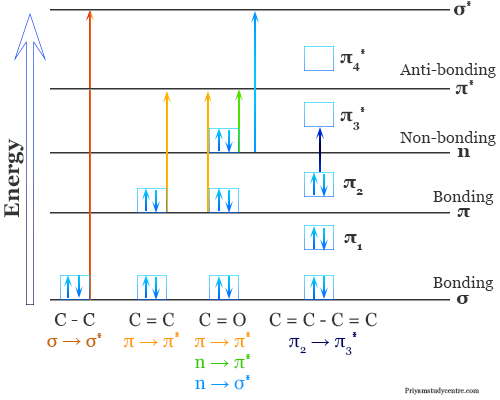 The UV-Visible spectroscopy principle is based on the absorption of ultraviolet light or visible light by chemical compounds. To occur a chemical reaction, the reacting molecules must be activated by acquiring activation energy. In photochemical reactions, the activation energy is obtained by absorption of radiation or light energy. In order to study the mechanism of the photochemical reaction, we need to study the types of electronic transition like σ → σ∗, n → σ∗, n → π∗ , and π → π∗ transition. Absorption peaks (λmax) and molar absorptivity (∈max) and possible electronic transition of some common compounds are given below the table,

n to sigma star transition (n → σ∗) involves saturated compounds with one hetero atoms like oxygen, nitrogen, fluorine, chlorine, etc. Normally, saturated halides, alcohols, ethers, aldehyde, ketones, and amines participate in this type of transition. These transitions require comparatively less energy than the σ → σ∗ transition. In saturated alkyl halides, the energy required for n to sigma star transition (n → σ∗) decreases with the increase in the size of the halogen atom or decrease in electronegativity of the atom. Due to the greater electronegativity of chlorine than iodine, the n electron on the chlorine atom is comparatively difficult to excite. The n electrons on the iodine atom are loosely bound.

In n to pi star transition (n → π∗), an electron in unshared pair on a hetero atom is excited to π∗ antibonding orbital. It involves the least amount of energy than all types of transition in ultraviolet visible spectroscopy. Therefore, the n → π∗ transition gives the absorption with a longer wavelength. In saturated ketones, n → π∗ transitions around 280 nm are the lowest energy transition. n → π∗ is forbidden by symmetry consideration. Thus the intensity of the band due to this transition is low, although the wavelength is long.