Commercial instrumentation of supercritical fluid chromatography technique is given below the picture, 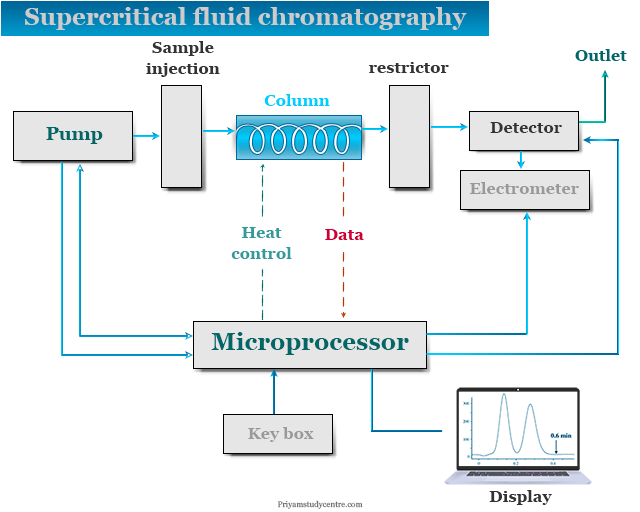 The most important components in SFC instrument are,

The pressure regulator is an important component in the SFC instrument. It affects the density of the mobile phase. When density increases, the solvent power of the mobile phase also increases. It reduces the elution time of the SFC instrument. For example, if the pressure of carbon dioxide molecules reduces from 70 to 90 atmospheres, elution time reduces from 25 to 5 minutes. Therefore, pressure programming is an important component in the Supercritical fluid chromatography principle.

The commonly used mobile phase for supercritical fluid chromatography is carbon dioxide (CO2). It is the best solvent for a variety of organic compounds. It is used widely in SFC instrument because CO2 transmit ultraviolet visible spectrum, is nontoxic, and is cheap. Sometimes polar organic modifiers like methanol are used on it. We used also ethane, pentane, nitrous oxide, dichlorofluoromethane, ether, and ammonia modifiers.

The flame ionization detector (FID) is used in the SFC instrument but cannot be used in HPLC. It can be hyphenated with a mass spectrometer. Other detectors like UV, IR, and fluorescence can also be used in SFC instrumentation.