Critical constants like critical temperature, critical pressure, and critical volume of gas determine the condition and formula of liquefaction of real and ideal gases. Liquefaction of gases is an important property in physical chemistry which uses for the transportation of natural gas. Most of the gases in our environment are liquefy at ordinary pressure but the suitable lowering of cooling the temperature. But many gases like hydrogen, nitrogen, oxygen, methane, etc can not be liquefied at ordinary temperature however high pressure may be used. Hence the condition of liquefaction and critical temperature, pressure, and volume of real gas molecule define by Andrews’s isotherms and determine in terms of van der Waals constant.

In 1869, Thomas Andrews carried out an experiment with a small quantity of carbon dioxide in a glass tube enclosed and sealed by the chemical element mercury. He studied P – V relations for carbon dioxide at different temperatures or the condition of liquefaction at the critical temperature. 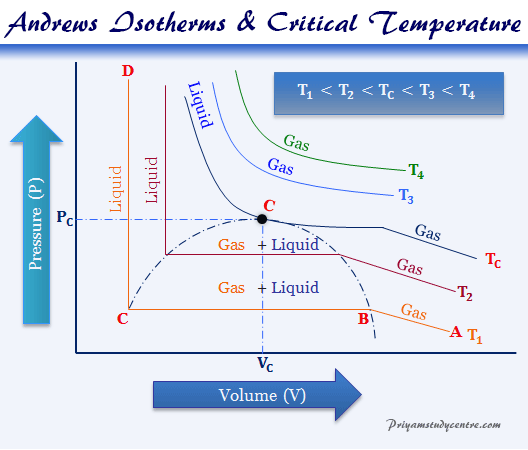 Point C, liquefaction of carbon dioxide is complete. The CD of the curve evidence for the fact. AB represents the gaseous state, BC represents liquid or vapor in equilibrium, and CD shows the liquid state only. Still higher temperatures at T2, we get a similar type of curve like ABCD. At temperatures TC, the horizontal portion is reduced to a mere point, called the critical point or state of the gases. Every gas can have a limit of temperature above which it can not be liquefied.

The critical temperature, pressure, and volume simply represent TC, PC, and VC respectively, and above which the gases cannot be liquefied.

What is critical temperature?

What is critical pressure?

Critical pressure (PC) is the maximum pressure required for the liquefaction of gases at the critical temperature.

What is critical volume?

Critical volume (VC) is the volume occupied by one gram mole of gaseous substances at critical temperate and pressure.

An examination of the PV curve at the temperature below the critical temperature may be discontinuous or break down during the transformation of gas to liquid. The continuity of the state of matter from the gas to liquid can be explained from the above Andrews isotherm ABCD at temperature, T1. Suppose the gas is heated with the specific heat at constant volume along with AB. Then the gas gradually cooling at constant pressure along with BC, the volume will be reduced considerably. On reaching D the process liquefaction would appear.

At point D, the system contains highly compressed gas. But from the Andrews curve, the critical temperature point is the representation of the liquefaction point of the gases. Hence there is hardly a distinction between the liquid and the gaseous state. There is no line of separation between the two phases. This is known as the principle of continuity of the state. 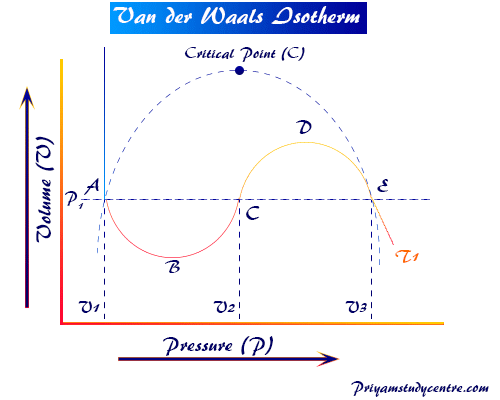 With the increase of temperature the minimum and maximum points come close to each other and at the critical point (C) both maximum and minimum coalesce. The slope and curvature both become zero at this point. In these conditions, we can calculate the critical temperature, pressure, and volume formula for real gases from the Van der walls equation. 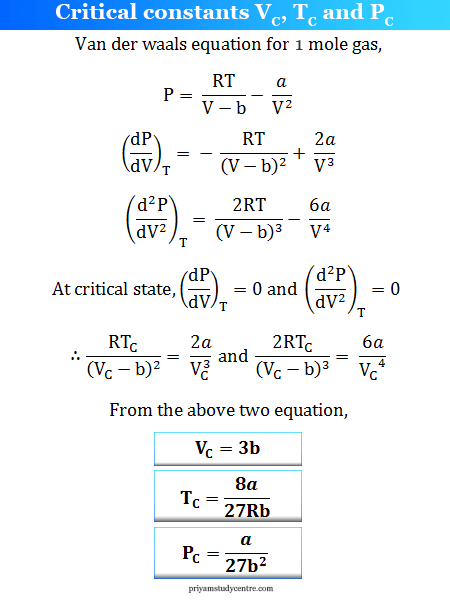 Compressibility factor formula at this state of the gas, Zc = PCVC/RTC = 3/8 = 0.375 and critical coefficient value = 8/3 = 2.66. If we compare these values with the experimental values, we found that the agreement is very poor. Because Van der Waals equation at the critical state not very accurate. 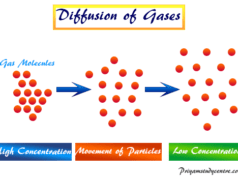 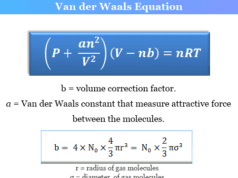 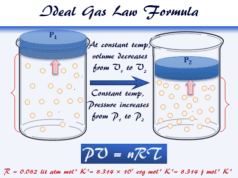