Hydrocarbon like aliphatic, aromatic, or polynuclear aromatic hydrocarbons are types of organic compounds processing hydrogen and carbon in the entire molecular formula. They contain at least one single, double or triple bond in two adjacent carbon atoms. 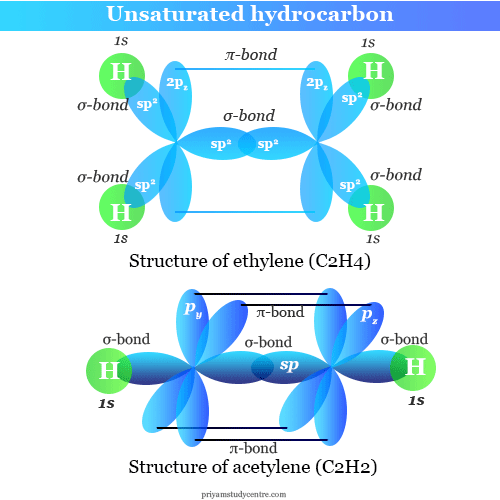 These four hybridized orbitals of carbon atoms mix with the hydrogen atom to form saturated organic compounds. But for sp2 and sp-hybridization, the carbon atom is not saturated by valency four.

The solubility of hydrocarbons shows that hydrocarbon molecule is almost insoluble in water but rapidly soluble in alcohol or ether solution. When we are concerned with alkanes, the attractive forces are only weak Van der Waals forces.

The dipole moment of hydrocarbon like all alkanes whether straight or branched-chain will be zero. Zero polarity of these hydrocarbons is associated due to balancing the C-H covalent bond by the remaining alkyl functional group.

The position of the electromagnetic spectrum region of the C-H group depends on the carbon atom. Therefore, the stretching frequency region of hydrocarbons is in the following order, primary carbon > secondary carbon > tertiary carbon. 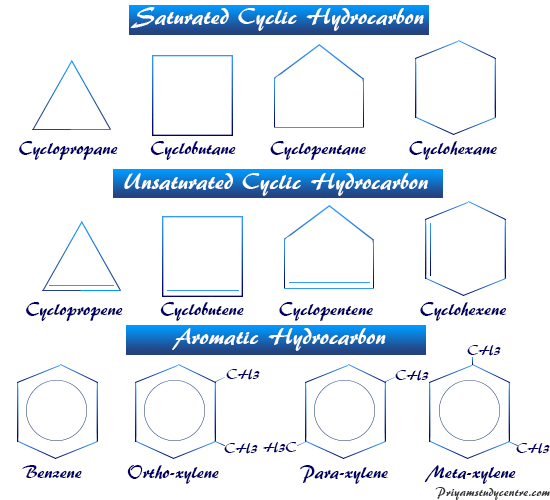 According to the reactivity, hydrocarbons are classified into two main classes,

According to the structure in chemistry, hydrocarbons are classified into two types, open-chain and cyclic or closed-chain saturated and unsaturated organic compounds present in our environment.

The list of organic compounds that contain two or more carbon atoms linked by only a single chemical bond is named by the term saturated compounds or hydrocarbons.

The compound that contains at least one multiple bond in adjacent carbon atoms is called an unsaturated hydrocarbon.

With the development of learning chemistry, organic compounds are divided mainly into two types which are pronounced as aliphatic and aromatic hydrocarbons.

The aliphatic naming of hydrocarbon is given from fatty acids but today these compounds are known as open-chain compounds. Therefore, several examples of saturated or unsaturated hydrocarbons come from natural sources named aliphatic hydrocarbon.

The aromatic type name of hydrocarbon is obtained from the Greek prefixes aroma meaning fragrant smell. The detailed characteristics show that the aromatic hydrocarbon compound contains the ring with the aromatic property.

Natural gas is another source of hydrocarbons that define large quantities of gaseous substance with undissociated liquid petroleum fuel used as the daily used energy source.

When the natural gas does not contain hydrocarbons above ethane is called lean or dry gas. If it contains the higher member of hydrocarbons are called rich or wet gases.

What are the components of crude oil?

Crude petroleum oil of our earth’s environment contains mainly gases with naturally occurring hydrocarbon in the forms of liquified or solid dissolved in liquid solvents.

In addition to the hydrocarbon, there are also contain known derivatives of hydrocarbons containing oxygen, nitrogen, sulfur, and crystalline solid metallic atom.

Naturally, crude oil is classified into two types, paraffinic and asphaltic which contains hydrocarbon compounds like alkane and naphthalene.

The term natural gas means the total quantity of gaseous hydrocarbon present in used liquid gases. Therefore, the main component of natural gas varies according to the source.

Natural gas consists chiefly of the first six alkanes or hydrocarbons and the percentage of occurrence decreases with increasing molecular weight.

The hydrocarbon separated from natural gas by fractional distillation under pressure uses for different energy generation purposes in our daily life.

Oxidation of natural gas under controlled conditions produces a mixture of organic aldehyde, acid, acetone, and alcohol which we use in the different chemical industries.

Hydrocarbons like methane, ethane, propane, butane, pentane, and hexane are obtained when natural gas combustion at about the temperature of 200 to 300°C with 1-200 atm pressure in presence of a chemical catalyst.

The thermal bond dissociation of organic molecules like hydrocarbon is known as pyrolysis. Thermal creaking produces a list of hydrocarbons or classes of alkanes from the higher member of the alkane family.

Alkane decomposed to lower alkanes by specific heat like 500°C to 600°C. The product obtained from a given alkane depends on, structure, applied pressure, and used catalyst.

For example, the most important list of hydrocarbons like methane, ethane, ethane, propane, butane, and isobutene obtains from organic fuels that contain up to four carbon atoms in their molecular formula.

What is acetic acid? Acetic acid also called ethanoic acid has the molecular formula CH3COOH and prepared industrially by various methods. Commonly it is used...