Mercury is a d-block chemical element of the periodic table with the symbol Hg and atomic number 80. It is a shining gray liquid metal in standard temperature and pressure. 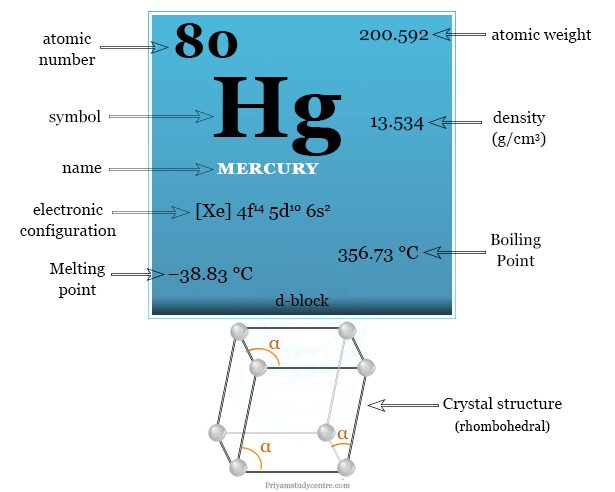 Aristotle named mercury as liquid silver. It was also called silver water which was derived from the Latin name hydrargyrum.

The group-12 (IIB) elements zinc, cadmium, and mercury are found after copper, silver, and gold with valence shell configuration d10s2.

A heavy, silvery d-block element, mercury is easily obtained from cinnabar (HgS) which is widely used as a pigment.  Mercury is still largely used in the electrochemical cell although it causes environmental pollution. It is also used for making thermometers, barometers, manometers, sphygmomanometers, float valves, etc.

Where is mercury found?

It is a very rare element found in the Earth’s crust but man discovered mercury in ancient times. It is found mostly in native forms or ores such as cinnabar (HgS), metacinnabar, sphalerite, corderoite, and livingstonite.

Most of the ores contain about one percent of Hg but ores from Spin contain 12 to 14 percent of Hg. Therefore, spin is the largest depositor of metal. It is also found at a very low level in the biosphere and in fossil fuels such as coal, oil, and natural gas.

The extraction of mercury is relatively very simple. The crushed cinnabar (HgS) is concentrated by flotation.

A better and most widely used technique is the distillation of impure mercury under a vacuum.

A heavy silvery-white metal, mercury has filled d-subshell. Therefore, it behaves more like a representative element rather than a transition metal. 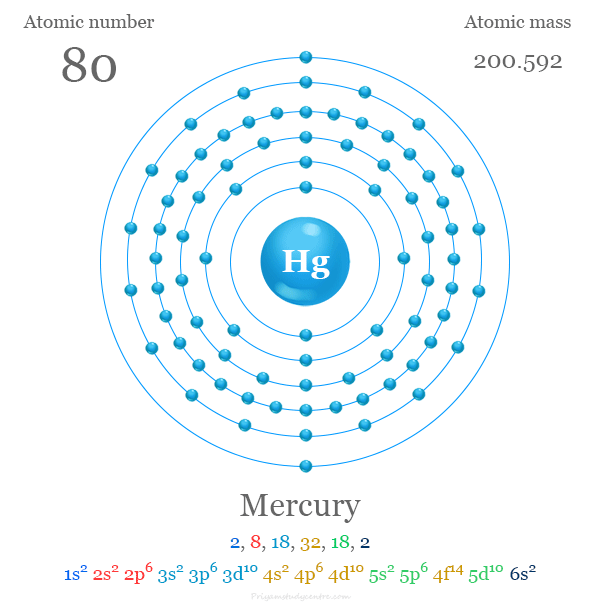 Mercury in the periodic table

It is placed in place in group 12 and period 6 of the periodic table with valence shell electronic configuration 4f14 5d10 6s2. It is a d-block metal placed along with zinc and cadmium. 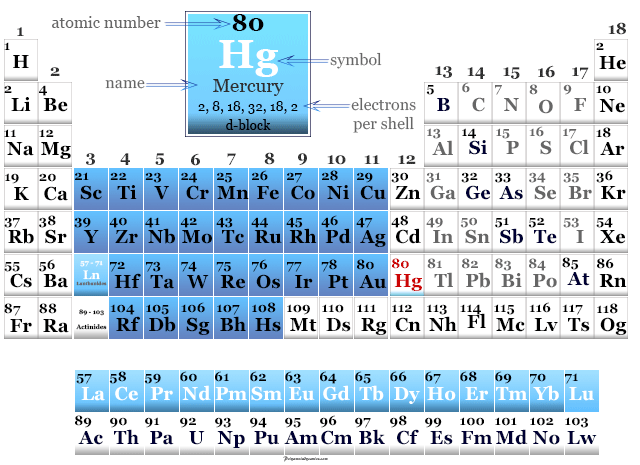 The large difference between the 1st and 2nd ionization energies suggests that mercury formed chemical compounds in +1 and +2 oxidation states. A univalent state of Hg appears in the form of Hg2+2.

The study of mercury chemistry is incomplete without an appreciation of Hg (I) and Hg (II) equilibria. The redox potentials of different couples are given below the table,

From the above table, only those oxidants with redox potential within the range +0.789 to +0.854 volt can oxidize metallic mercury to a dimercury (I) state.

From a practical viewpoint, we cannot find any oxidant whose potential lies in the range of +0.789 to +0.854. Therefore, direct oxidation of Hg to the dimercury (I) state is not possible. Most of the chemical compounds are formed in Hg (II) state.

Mercury (II) oxide is a red or yellow colour chemical compound depending upon the particle size.

The oxide, HgO is weakly basic and dissolved in acids to form salts.

Mercury (II) sulfide is precipitated as a black material on passing hydrogen sulfide through a solution of Hg (II) salts. It is also obtained by grinding metallic mercury with sulfur.

It is obtained in a red and black variety. The stable red variety is a costly pigment. The sulfide is very insoluble and can be brought into solution by boiling with aqua regia.

Mercury (II) bromide and Iodide are obtained by the addition of bromine or iodine ions to a solution of Hg (II) chloride.

The solubility of halides in an aqueous solution decreases in the order of HgF2 > HgCl2 > HgBr2 > HgI2.

Mercury (II) nitrate and sulfate are obtained through the action of nitric acid or sulfuric acid on metallic Hg.

What is mercury used for?

Elemental mercury was known in ancient India, China, Egypt, and Greece. Indian Ayurveda describes the extraction process of pure mercury from its ore cinnabar. They used it mostly on medicine and cosmetics.

Today the use of mercury is reduced due to its toxic effect on the environment and human health.

How much mercury is toxic?

It is toxic due to its low vapour pressure and easily enters our body unless precaution is taken.

It produces several types of diseases such as tumors, headaches, inflammation of the bladder, loss of memory, and other brain disorders.

Alfred Stock was a victim of such type of mercury poisoning during the constant handling of vacuum pumps in connection with his research on boron and silicon hydride.

Mercury effects on the environment

Elemental mercury enters the sewage water through different types of industries and affects our environment in several ways.

It is converted into species like CH3Hg and (CH3)2Hg by anaerobic methane synthesizing bacteria. The conversion is facilitated by Co (III) in vitamin B12.

These species are entered into plankton and thereafter our food chain via fishes. Organomercurials also enter into sewage water and our food chain through pesticides and fungicides.

The methyl mercury cation comes from the food chain attached to cell membranes and brain tissues. They are retained their position for a long period of time.

It may be inhabited the normal function of the brain. O.5 ppm level of CH3Hg+ in the blood is sufficient to disrupt normal physiological functioning.

The normal level of mercury in water is 0.001 to 0.0001 ppm but sewage effluent increases this level to 10 times greater. Ultimately it converted to CH3Hg+ and enter our food chain by causing a tragedy like Minamata.

The most tragic report of mercury poisoning came from Iraq in 1972 where 450 people died after consuming wheat-containing Hg pesticides.

What is aluminum metal? Aluminum (symbol Al) or alumium is a chemical element or silvery-white, lustrous, low melting, soft metal of Group 13 (IIIA) or...