What is nitrogen fixation?

Nitrogen fixation is the process which fixing atmospheric dinitrogen (N2) in soil by any industrial and natural or biological processes to convert ammonia or other nitrogen compounds. Most of the natural nitrogen fixation in the soil by plants is caused by the action of nitrifying bacteria which contain nitrogen fixing enzyme nitrogenase. 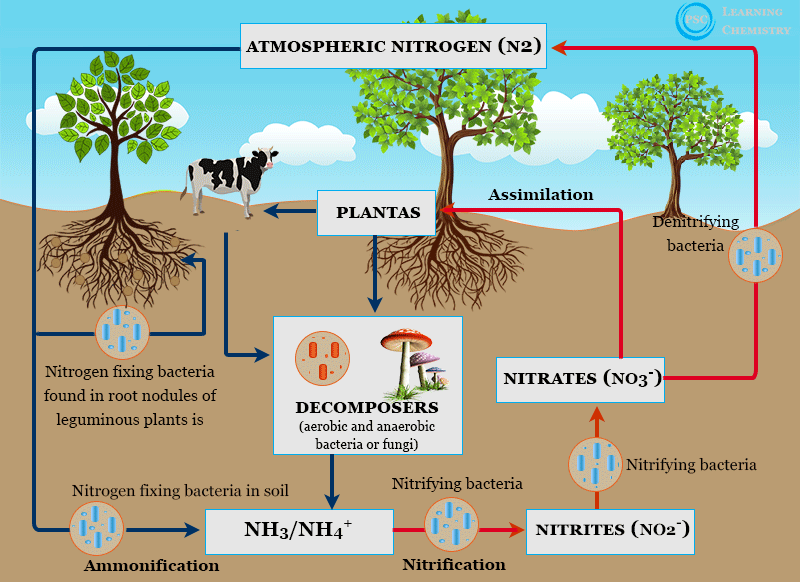 Rhizobium, Anabaena, Nostoc, Azotobactor, and Clostridium pastorium are the most common examples of nitrogen fixing bacteria. Industrially, nitrogen can be fixed by the action of nitrogenous fertilizers.

Nitrogen is an essential element or nutrient for plant growth but it is unavailable due to strong bonding in nitrogen molecules. Therefore, nitrogen fixation is essential to life because nitrogen can help to constitute several biomolecules such as amino acids, proteins, and nucleic acids (DNA and RNA). We can fix nitrogen into soil industrially or biologically.

Rhizobium is the most important bacteria which lives symbiotically in the nodules or roots of certain plants such as Leguminosae, pea, beans, etc. Anabaena, Nostoc, Azotobactor, and Clostridium pastorium have similar functions which fix dinitrogen into the soil on different types of plants.

All the bacteria contain the nitrogen fixing enzyme nitrogenase. Traces of transition metals like iron, molybdenum, copper, cobalt, and boron are necessary for the functioning of these bacteria.

In one year about 120 kg of nitrogen is fixed per acre of fertile land by Rhizobium. The amount of nitrogen fixed annually by nitrifying bacteria is subsequently greater than the amount of artificial fixation through the Haber process.

Many bacteria live in soil and fix a significant amount of nitrogen from the atmosphere to the soil without the interaction of any microorganism. These are called free-living bacteria.

Azotobacter, Beijerinckia, and Clostridium are examples of free-living nitrogen-fixing bacteria. These organisms can utilize energy from oxidizing organic or inorganic molecules by other organisms or from decomposition.

Many symbiotic bacteria can fix nitrogen symbiotically by plants. Anabaena, Rhizobium, Frankia, and Azospirillum are the most common examples of symbiotic nitrogen-fixing bacteria.

Nitrogen is fixed or combined in nature in the various industrial and biological processes but more than 90 percent of nitrogen in the soil is fixed by soil microorganisms. It is interesting to observe that nitrifying bacteria can fix nitrogen from the atmosphere under ordinary conditions.

In chemistry, nitrogen can be converted to ammonia under 200-atmosphere pressure and 550 °C in presence of catalysts.

Atmospheric nitrogen molecules contain two nitrogen molecules joined by a triple covalent bond. It makes the molecular nitrogen highly inert and nonreactive. The enzyme nitrogenase in the nitrogen fixation process breaks the triple bond and the addition of three hydrogen atoms to form an ammonia molecule. 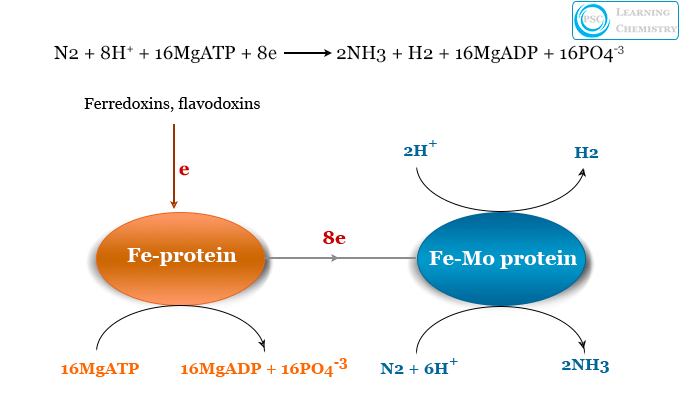 The electrons required are supplied to nitrogenase by reduced forms of ferredoxins and flavodoxins. The enzyme nitrogenase contains two large proteins,

The Fe-protein transfers an electron to the FeMO protein for hydrolysis of every two molecules of Mg-ATP. When the FeMO proteins accumulate eight electrons, they can be transferred to a nitrogen atom.

Lighting in the upper atmosphere leads to the formation of NO and NO2 gas. These gases are carried by rain to the soil as HNO2 and HNO3. It can be transformed into the soil for plant unusable form. These acids can seep into the soil and convert to the NO−3 (nitrate) form which is used in plants.

The major human interference in the nitrogen cycle occurs through the artificial or industrial fixation of nitrogen. It is used for the manufacturing of fertilizer or growing nitrogen levels in soils for the production of food for our ever-increasing population.

Several commercial or industrial nitrogen fixation processes are developed during the first decade of the 20th century. Three of these most common processes are,

The direct combination of nitrogen and oxygen at high temperatures produces nitric oxide. It can be converted to nitrates fertilizers for increasing the production of crops.

The electric arc is required to maintain such a high temperature. It is very costly and does not use for fixing nitrogen at the present time.

The reaction of nitrogen and calcium carbide at high temperatures produces calcium cyanamide. It can be hydrolyzed to form ammonia and urea. The cyanamide process was utilized in several countries before and during the first World War I due to the increasing demand for food production.

Plants need to combine or fix forms of nitrogen. Most of the nitrogen used for agricultural cropping comes from nitrogen fertilizers and nitrogen fixing bacteria.