Riboflavin, also known as vitamin B2 is a water soluble vitamin that occurs widely in nature and necessary for growth and health. Riboflavin occurs free or phosphate or joined to specific proteins to form enzymes. Therefore, it is also called lactoflavin. 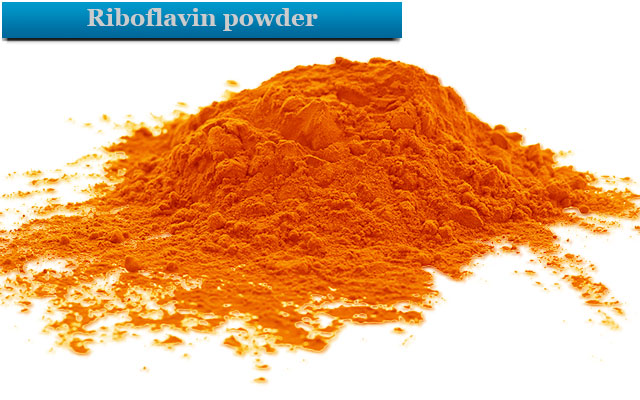 The common sources of riboflavin are vegetables, meat, and dairy products. It was first isolated from milk which is closely related to yellow water soluble crystalline powder like flavins.

The preliminary test shows that the structure of riboflavin contains an aromatic diamino group. Riboflavin is 6,7-diethyl-9-(D-1′-ribityl)-isoalloxazine with chemical formula C17H20N4O6.

It involved energy metabolism, cellular respiration, antibody production, and activation of iron, folic acid, and vitamins B1, B3, and B6. Riboflavin deficiency is very rare because we consumed several foods which contain a huge amount of riboflavin.

It is a bright yellow powder to show green fluorescence. It is soluble in water and ethanol but insoluble in chloroform and other organic solvents. The aqueous yellow solution of riboflavin shows a yellowish-green fluorescence with λmax = 565 nm. It is used for determining riboflavin quantitatively.

When exposed to light in presence of sodium hydroxide, it forms mainly Lumi-lactoflavin. The structure of Lumi-lactoflavin has been identified by its synthesis. It can be synthesized by condensation of N-methyl-4,5-diamino-o-xylene with alloxan hydrate in an aqueous solution at 50 to 60 °C.

The structure of riboflavin shows that it contains lumichrome with a side chain attached to the N-9 atom. Lumichome is Lumi-lactoflavin where a hydrogen atom present at 9 positions is replaced by a methyl group. 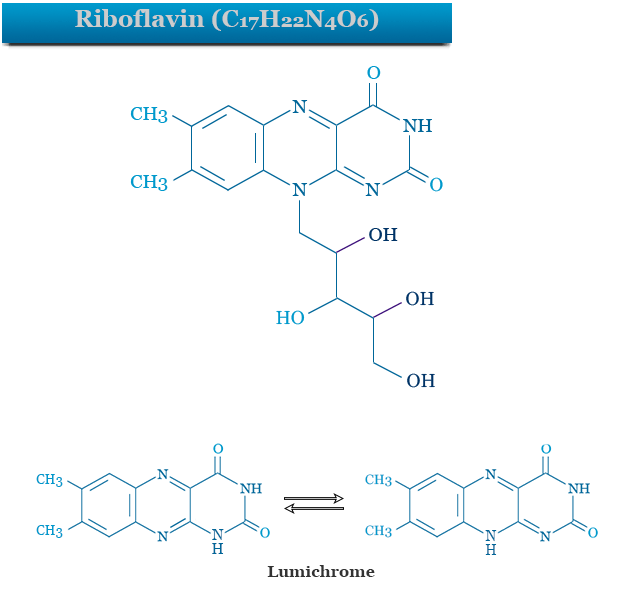 Riboflavin can synthesis riboflavin by the following methods,

Many other procedures for the synthesis of riboflavin are developed recently. In 1947, Tishler can synthesize it from the azo compound which was prepared by Karrer synthesis. The azo compound synthesis from Karrer can be combined directly with barbituric acid in presence of an acetic acid solution. The product obtained by this method is good and very pure.

Riboflavin or vitamin B2 is found widely in foods but we also sold it as a dietary supplement. Vegetables, meat, and dairy products are the main sources of riboflavin.

It is a water-soluble vitamin. Therefore, cooking food by boiling can cause it to be lost.

It helps to convert carbohydrates into adenosine triphosphate (ATP). The ATP produces by this process provides energy as the body requires. ATP also plays a vital role in storing muscle energy.

Riboflavin deficiency is very rare in developed counties like the United States, Canada, Australia, United Kingdom, etc. Peoples who lived in these counties consume a significant amount of vitamin B2 in their dietary supplements. A deficiency of riboflavin can be primary or secondary.

Riboflavin deficiency is known as ariboflavinosis. It causes mouth ulcers, hair loss, and itchy, watery, bloodshot eyes. It also causes anemia and degeneration of the liver or nervous system. The deficiency of riboflavin during pregnancy can cause fetal birth defects.

How much do we need vitamin B2?

Riboflavin or vitamin B2 deficiency is very rare for developed counties because they can consume a sufficient amount of B2 in their dietary supplement.

Developed counties like the United States, Canada, United Kingdom can consume excessive amounts of vitamin B2 in foods. It is excess from RDAs recommendation. The very low population of these counties can consume less than that of estimated values.

It is a yellow-orange crystalline powder. Therefore, it can be used for food coloring. Riboflavin is very useful for absorbing and activating iron, folic acid, and vitamins B1, B3, and B6.