Bromine is a chemical element of Group 17 (Group VIIA) or halogen family of the periodic table with atomic number 35 and symbol Br. It is a fuming red-brown liquid at room temperature. It is widely used in organic chemistry for the preparation of 1,2-dibromoethane or ethylene dibromide. 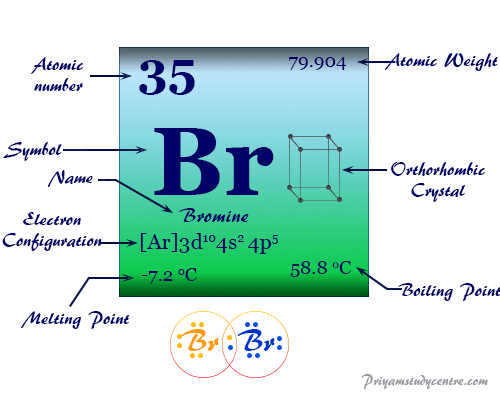 Bromine is the third-lightest element of the halogen series. The properties of the element intermediate between chlorine and iodine.

The chemical element bromine was discovered in 1826 by French chemist Antoine-Jerome Balard from the ash of seaweed or the salt marshes of Montpellier.

He prepared the element by chlorinating concentration solutions of magnesium bromide around the pH scale of 3.5. The material is distilled with magnesium oxide and sulfuric acid to produce bromine vapor, which is condensed and purified into a dark liquid.

According to the French Science Academy, the name bromine is derived from the Greek word bromos which means bad smell or stench.

Bromine in the periodic table

The nonmetal bromine is placed in period-4 and group-17 with p-block elements. 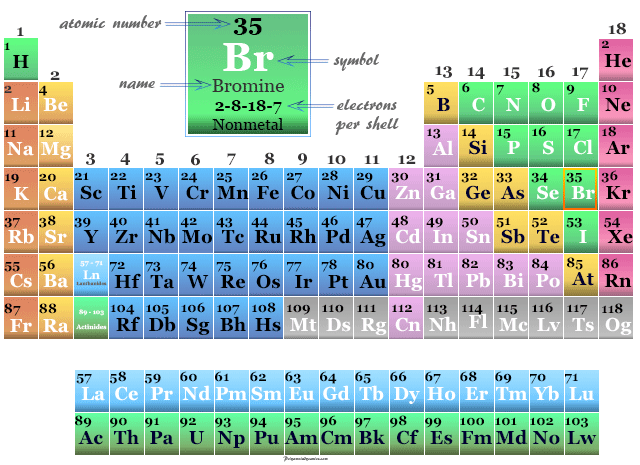 It is a member of the halogen family with one electron short of the next noble gas krypton.

The non-metallic chemical element bromine has electronic configuration [Ar] 3d10 4s2 4p5. Due to the presence of seven valence electrons and a vacant d-orbital, it exhibits several oxidation numbers or states like -1, +1, +3, +5, +6, and +7.

Some important properties of bromine are given below the table,

Fluorine, chlorine, bromine, and iodine are the non-metals of the Group-17 or halogen family. Fluorine is the most reactive among all the chemical elements. The reactivity of halogens decreases from chorine to bromine to iodine.

For example, iodine reacts with hydrogen when heated in presence of a chemical catalyst like platinum. The bond energy of other halogens are,

The exceptionally high reactivity of fluorine is due to very low bond energy but the bond energy of other halogens like chlorine, bromine, and iodine gradually decreases. This fact, suggests that the chemical reactivity of Br2 is intermediate between chlorine and iodine and acts as an oxidizing agent.

Where is bromine found?

Bromine is a much less abundant element than fluorine and chlorine, only to the extent of 2.5 ppm in earth crustal rocks (46th order).

The largest natural sources of bromine are the oceans which contain about 6.5 mg/liter of ocean water. Some salt lakes and seas have a much higher concentration of bromide ions like Searle’s lake in California (850 mg/liter) and the Dead sea (4 gm/liter).

The United States and Israel are the two main sources of bromine in the world which are transported through large-capacity metal drums for industrial applications.

Bromine is just one electron short of the next noble gas (krypton) configuration. The formation of the bromide ion indicated the large electron affinity of the element.

The bromide ion combines with electropositive elements through ionic chemical bonding to form the ionic crystal lattice. But when the formation of an ionic lattice is energetically favorable, covalent bonding is formed.

Except for fluorine, all the halogen exhibits positive oxidation states in their oxides, oxoacids, and interhalogen compounds. Bromine is slightly soluble in water, saturates hydrocarbon, carbon tetrachloride, etc. In water, it forms a hydrated Br2 molecule together with HOBr.

Almost all elements of the periodic table except helium, neon, and argon form binary compounds with bromine to give a wide range of halides.

The elements like oxygen, nitrogen, fluorine, and chlorine have electronegativity higher than that of bromine. Therefore, the binary compounds of such elements are not called bromides, they are called oxides, nitrides, fluorides, and chlorides.

Most metal bromides have ionic compounds but the partial covalent character is developed depending upon the charge and oxidation state of the metal.

All the halogen reacts with hydrogen to form volatile covalent hydrides. The reactivity towards hydrogen gradually falls from fluorine to iodine.

The hydrogen bromide is obtained by treating a mixture of water and red phosphorus with a Br2 molecule. The hydrides HCl, HBr, and HI are gases at ordinary temperature but HF is liquid because of the association through hydrogen bonding. All the hydrides ionize in an aqueous solution due to solvation.

Oxides of halogen are unstable compounds and the higher oxides are more stable than the lower ones. The stability of iodine oxides is higher than the chlorine oxides, while the oxides of bromine are least stable with no practical importance.

Dibromine monoxide (Br2O) is prepared by reaction Br2 with HgO or low-temperature decomposition of BrO2 in a vacuum. It is a dark brown liquid with a melting point of −175 °C.

The pale yellow crystalline solid, bromine dioxide (BrO2) is prepared by oxidizing Br2 with ozone in CF3Cl at −78 °C.

Bromic acid can be obtained by reacting bromate with dilute sulfuric acid. Bromates are usually prepared by oxidizing bromides with hypochlorites (Cl2 + alkali) or reaction of bromine with hot concentrated sodium hydroxide or potassium hydroxide.

World production of bromine is much less than that of chlorine nearly 0.4 million tonnes per year used to prepare a wide variety of organobromine compounds. It is largely consumed to prepare 1, 2-dibromide, or ethylene dibromide which was added to petrol to remove lead.

In 1970 the process declined due to lead pollution of the environment. Ethylene dibromide is still produced in large quantities for the production of pesticides.

For the production of polymers and plastics, we used vinyl bromide during the polymerization process.

Bromine is used in the production of several bromocompounds which are effectively used in pesticides and flame retardants in fabrics. For example, tris-(dibromopropyl) phosphate has remarkable properties of flame-retarding.

Organic bromocompounds are used in high-density drilling fluids and dyes.

In pharmacology, bromine compounds and salts are used in both veterinary and human medicine, but the use of such medicine is not permitted in all countries of the world due to its side effect.

For example, the U.S. Food and Drug Administration (FDA) do not approve bromide for the treatment of any disease It is also removed from sedative products like Bromo-Seltzer.

Bromine is used in making various inorganic chemicals like hydrogen bromide, and silver bromide in the photo films industry.