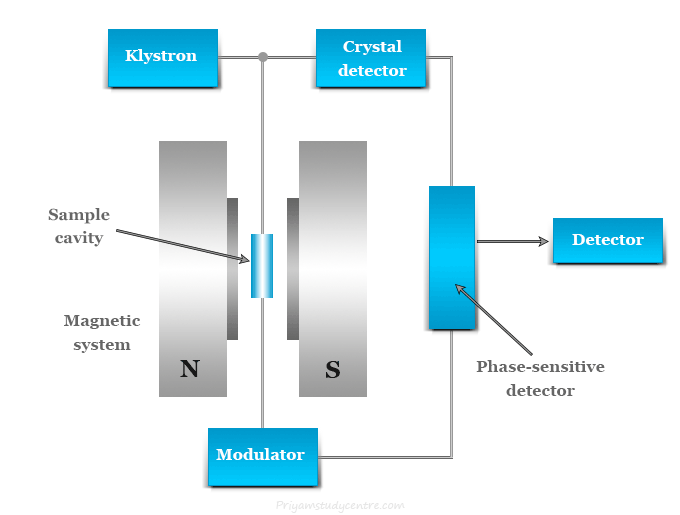 ESR spectroscopy uses mainly to study free radicals having unpaired electrons. These electrons remain after the homolytic fission of a covalent bond by ultraviolet or gamma radiation.

ESR has limited application because it is observed primarily in systems that contain unpaired electrons. Therefore, the systems which can investigate by ESR spectroscopy are organic and inorganic free radicals and ions of transition metals and rare earth metals that have unpaired d or f-electrons.

In electron paramagnetic resonance (EPR), the energy levels are produced by the interaction of the magnetic moment of an unpaired electron in a molecule with an applied magnetic field. The ESR spectrum is obtained due to the transition of these energy levels by absorbing radiations with microwave frequency. 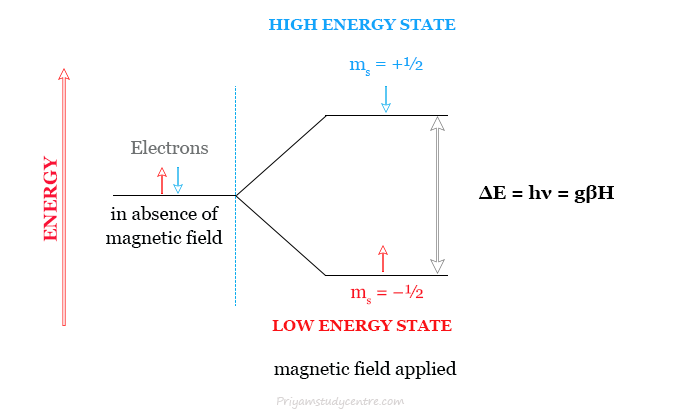 For an electron, the spin angular momentum quantum number (ms) will have values of ±½. In absence of a magnetic field, the two values of ms will give rise to a doubly degenerate spin energy state. If a strong magnetic field H is applied the degeneracy is removed to give two non-degenerate energy levels.

For electron spins that are parallel in a field, E = μH. Whereas, for those which are aligned antiparallel, E = −μH. Here, μ = magnetic moment of the spinning electron.

In the ESR spectrum, a transition between the two different energy levels takes place by absorbing a quantum of radiation of frequency in the microwave region. Therefore, the ESR spectrum of a free electron would consist of a single peak.

When the absorption occurs, the following relation holds good for the ESR spectrum,
2μH = hν

A source in electron spin resonance

In an ESR spectrometer, the various components of a source may include:

The microwave radiations obtained from the klystron enter the circulator through a waveguide by a loop of wire which is coupled with an oscillating magnetic field. It is set up a corresponding field in the waveguide.

A waveguide is generally made up of a hallo rectangular copper or brass tubing. It has silver or gold plating inside the tube for the production of a highly conducting flat surface.

The operation of the four-port circulator in ESR spectroscopy is given below in the picture, 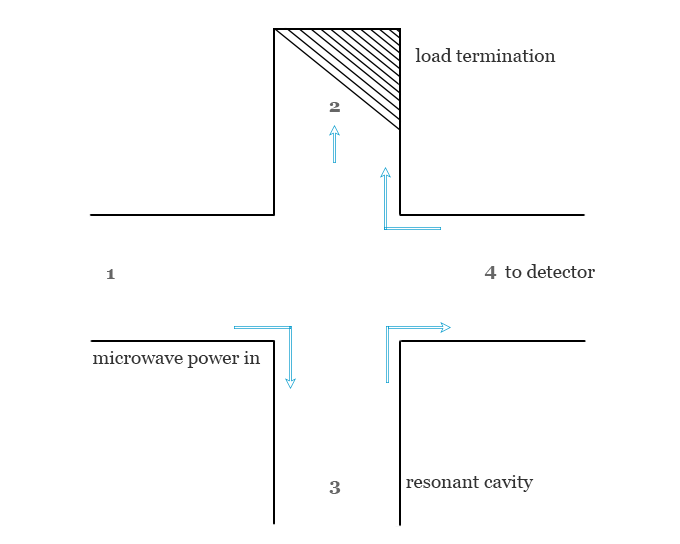 The sample cavity is an important component of the electron spin resonance (ESR) spectrometer. The cavity system is constructed in such a way that the applied magnetic field is maximum in the sample dimension.

In most ESR spectrometers, duel sample cavities are used due to simultaneous observation of a sample and a reference material. By use of reference material, the sources of error are compensated by comparing relative signal heights.

In an EPR spectrometer, the resonant cavity is placed in a magnetic assembly that includes the magnet with a dedicated power supply. It has a homogeneous magnetic field that can vary from 0 to 500 gauss.

The magnetic field should be stable and uniform over the sample volume. The stability of the field can be enlarged by a high-regulating power supply system.

The most commonly used detector is a silicon crystal detector. In ESR spectrometers, it acts as a microwave rectifier that converts microwave power into a direct current (DC) output.

After detection by the crystal detector, the signal undergoes a narrow-band amplifier that amplified the signal with a lot of noise. The noise can be reduced by the operation of the phase-sensitive detector.

Finally, the signal from the phase-sensitive detector and sweep unit is recorded by the oscilloscope or pen recorder.

Electron spin resonance (ESR) or electron paramagnetic resonance (ESR) spectroscopy is used in various fields of science such as analytical chemistry, biochemistry, and physics for the detection and identification of free radicals in solids, liquids, or gases. It is also used for the detection and identification of paramagnetic centers such as F-centers.

The ESR spin-trapping method was developed in the early 1970s and used for the analysis of short-lived free radicals. It is now widely used or one of the most powerful tools for free radical analysis. Some interesting examples of biological analysis are,