Catalyst in a chemical reaction 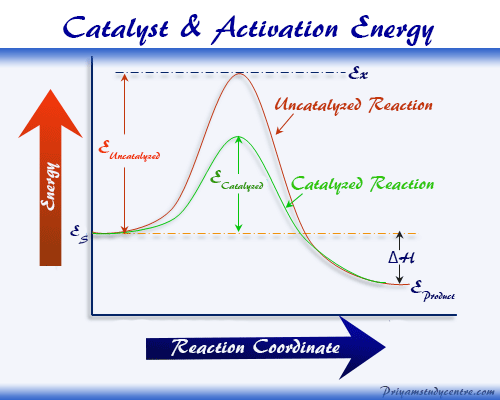 The catalyst plays an important role in many chemical and real-life biological processes and works to find the alternate path where activation energy decreases but kinetics reaction rate increases.

The phenomenon where catalysts show their activity define as the catalysis reaction in chemistry. For example, hydrogen ion acts as a positive catalyst in the hydrolysis of ester or sugar without effect on chemical equilibrium. It is mainly two types,

What is negative catalyst?

Sometimes the foreign substance slows down the speed of the chemical synthesis process or even stops the reaction is called a negative catalyst.

But such a common definition does not fully satisfy negative catalysts because negative catalysts sometimes change the chemical process permanently. Therefore, such substances in chemistry are properly called an inhibitor. For example, sulfuric acid acts as an inhibitor in the decomposition of hydrogen peroxide.

The catalyst uses in the catalysis reaction has some common and definite characteristics in chemistry or chemical science.

The most important characteristics of the catalyst remain unchanged in the molecular mass, density, concentration, and chemical formula of constitute elements at the end of the reaction. However, the physical state of chemicals like particle size or color of the chemical catalyst may be altered.

For example, manganese dioxide uses for the decomposition of potassium chlorate becomes a finely divided powder after the chemical reaction is completed.

A catalyst can increase the rate or speed of chemical reactions. It can not start a reaction but only increases or decreases the speed of the reaction.

The catalyst does not affect the final state of chemical equilibrium. This means the catalyst itself is not consumed during the chemical reaction. It regenerates at the end of the reaction.

For example, 1.7 g of platinum produces 1.8 cc of oxygen per minute from the decomposition of hydrogen peroxide. But the platinum remains active even production of 10 lit of oxygen in a catalysis reaction.

How do catalysts effect equilibrium?

The catalyst does not affect the final state of equilibrium derived from Van’t Hoff equation,
ΔG0 = − RT lnk
where k = equilibrium constant

The equilibrium constant,
k = k1/k2
where k1 and k2 = rate of forward and backward reaction

If the catalyst increases the rate of the forward process or k1 increases, to keep k constant, k2 also increases to the same extent.

Therefore, catalysts enhance the rate of both types like forward and backward reactions, which helps to attain equilibrium more quickly but it does not affect the equilibrium according to the Le Chatelier principle.

From the definition and example, catalysts play a specific role in a specific catalytic reaction in science. Therefore, we can not be used the same common catalyst for every chemical process.

For example, manganese dioxide can catalyze the decomposition of potassium chlorate but not potassium nitrate.

The change of catalyst defines the nature of the chemical product of the reaction in chemistry.

An optimum temperature at which the efficiency or role of the natural catalyst like enzymes is most marked in chemical science and biology.

Types of catalyst in chemical reaction

In real life, the most common chemical catalyst and catalyzed reactions are classified into two types,

In homogeneous types of catalysis reactions, the catalyst forms a single phase with the reactants. Many homogeneous catalyzed reactions have been studied in the gas phase and liquid phase.

The reaction rate in a homogeneous catalysis reaction is invariably proportional to the concentration of the catalyst.

The most common examples of such catalysis chemical reactions in the gas phase are,

In heterogeneous catalysis, the chemical catalyst and reagents form separate phases and often the surface or interface is responsible for the catalytic properties.

Heterogeneous catalysis reactions mean, a solid serves as a catalyst and the reactants are gaseous or liquid phases. One or more of these reactants are absorbed on the surface of the solid. Therefore, the surface provides an alternative path for lowering activation energy or accelerating the reaction rate.

In most reactions, the heat of adsorption increases the activation energy of the reactant, and the equilibrium reaches easily. The reaction of the solid surface catalyst consists of four consecutive chemical steps,

The diffusion and desorption process is very rapid and does not play any important role in heterogeneous catalysis reactions.

Transition metal surfaces like nickel or copper are a very good list of heterogeneous surfaces for the hydrogenation of alkenes or olefin. Alumina is a suitable catalyst for the synthesis of hydrocarbon from a secondary alcohol.