Platinum is a chemical element or silvery white, lustrous, malleable, high density metal of group-10 of the periodic table with atomic number 78 and symbol Pt. Chemically, platinum metal is inert to attack by mineral acids, air or water under ordinary conditions. It is more ductile than gold, silver, or copper but less malleable than gold. 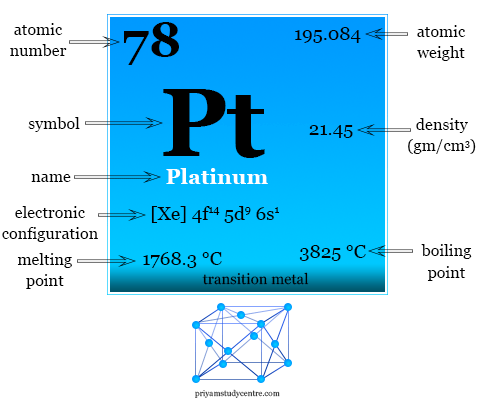 The elements namely ruthenium, rhodium, palladium, osmium, iridium, and platinum are called platinum metals. All these elements are rare in the earth’s crust. Platinum metals are found together with other noble metals like copper, silver, and gold.

Platinum was found in the Tomb of queen Shapenapit in the 7th century. In 1748, the Spanish expeditions Antonio de Ulloa maintained certain minerals which contain metal with a very high melting point. It was called Platina (little silver in Spanish)

A subsequent investigation by H Scheffer, Von Sickingen, and P Charbonneau developed the isolation process and name of platinum metal.

Generally, platinum metals have a high melting point and density. 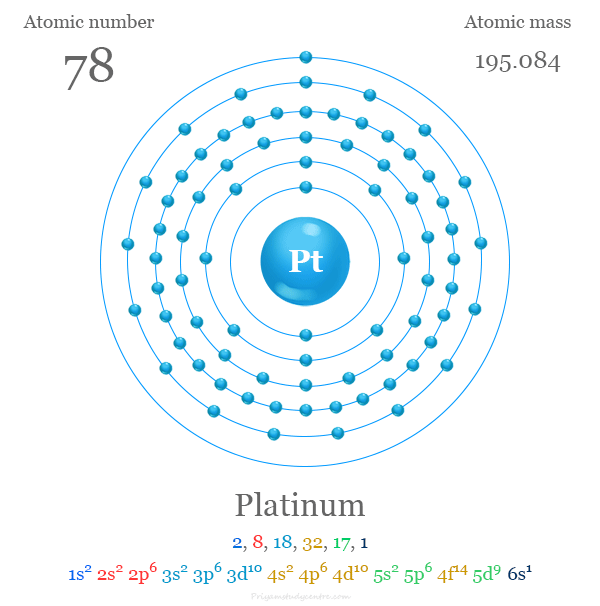 The gradual entry of shielding electron or (n−1) electrons inner core is responsible for slowly decreasing of melting point and density along with horizontal series from Re to Pt.

Electronic configuration and some physical and chemical properties of platinum are given below the table,

From group-10 elements like Ni, Pd, and Pt, the ionization energy increases with the increasing atomic number. Due to lanthanide construction, the atomic radius of Pd and Pt are the same. 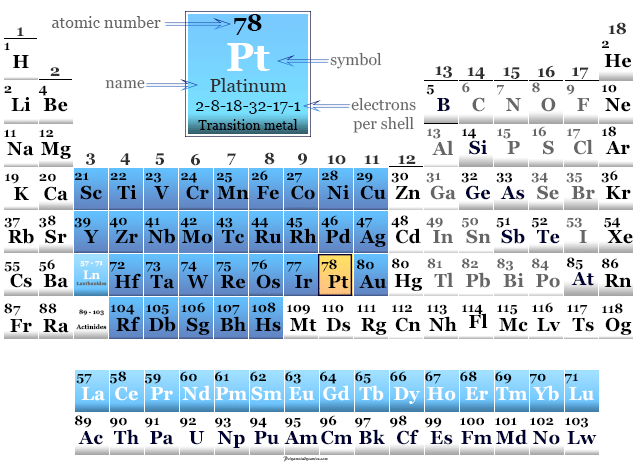 It is placed in group-10 of the periodic table with d-block elements or transition metals. The valence shell electronic configuration of platinum is [Xe] 4f14 5d9 6s1.

It has many similarities with group member palladium. +2 and +4 oxidation number or state is the most common for both metals.

Where is platinum found

The chief sources of platinum are South Africa, Canada, Russia, Brazil, Columbia, etc. It is rare in the earth’s crust and found about 0.01 ppm. The metal is found together mostly with sulfide and arsenides of Cu, Ag, and Au.

Braggite (Pd, Pt, Ni)S, sperrylite (PtAs2) and cooperate (PtS) are the most common minerals of platinum metal. A native metal is also available in the earth’s environment.

The hexafluoride (PtF6) is the representative of platinum metal in the +6 oxidation state. It is a dark red volatile unstable solid.

PtF6 is a highly reactive and corrosive reacting agent which react with glass in dry condition. Therefore, to handle PtF6, we used apparatus made of Monel metal. PtF6 is the most powerful oxidizing agent which oxidizes oxygen and xenon to form O2+PtF6− and Xe(PtF6)n.

The tetrachloride (PtCl4) is commonly prepared by heating H2PtCl6 in Cl2 at 300 °C. It is also prepared by reacting the Pt with SO2Cl2. The red-brown crystalline solid, PtCl4 dissolved in water to give ions having the composition [PtCl4(OH)2]−2.

Platinum (II) chloride is obtained by thermal decomposition of PtCl4. PtCl2 forms metal cluster compounds with the formula Pt6Cl12. In the Pt6Cl12 structure, the six platinum atoms occupy the six-point of the octahedron and the twelve edges of the octahedron contain twelve briding chlorine atoms.

Chloroplatinic acid or dihydrogen hexachloroplatinate (IV) is an important compound of platinum metal having the molecular formula H2[PtCl6]. It is obtained by dissolving Pt in aqua regia. Evaporating the solution with hydrochloric acid for the removal of nitric acid.
2 HNO3 + 8 HCl + Pt → H2[PtCl6] + 2 NOCl + 4 H2O

Pt(IV) forms a large number of octahedral complexes which are stable and inert towards substitution. Many of these are readily obtained by adding ligand in Pt (II) complexes.

The most common examples are,

Shaking a solution of K2PtCl4 in dilute HCl and ethylene (C2H4) gives the complex K[PtCl3(C2H4)] or Zeise’s salts. Cis and trans [Pt(NH3)2Cl2] are the most common examples of Pt (II) complexes.

Magnus’s green salt is another Pt (II) complex having the formula of [Pt(NH3)4][PtCl4]. This platinum salt is prepared by adding pink complex [PtCl4]−2 to colorless [Pt(NH3)4]+2.