What is Bond Dissociation Energy? 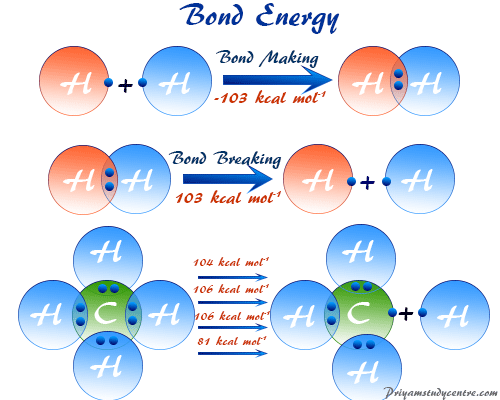 What is bond energy?

A methane molecule is formed by the overlap of four sp3 hybridized orbitals of carbon and four 1s orbitals of the hydrogen atom. Therefore, all carbon-hydrogen bonds are equivalent. But dissociation energy required to break the first bond is not the same as the second bond. Hence for calculating bond energy, we can take the average values of all the four bonds dissociation. Therefore, the bond energy for methane molecule = 397/4 = 99 kcal. The dissociation energy of some chemical bonds are given below the table,

The greater the polarity of a bond greater will be bond dissociation energies. This extra energy appearing in A – B molecules arise by electrostatic attraction between A and B dipole. Hence this extra energy possessed by molecules by electric polarization is called ionic resonance energy.

The quantity of heat required to produce one mole of atoms in the gaseous atomic state in the standard state is called the heat of atomization of the element It can be calculated from the spectrum measurement and some thermal data.

What is heat of formation?

The heat of formation is the heat change associated with the formation of 1 mole of a substance from its constituents elements in their stable forms. It is generally represented by ΔHf. When the elements are standard states, it is called standard heat of formation. For example, ΔHfo for CH4 = – 17.9 kcal. A positive value of ΔHfo of a compound indicates that the compound is less stable than its constituents. It is called an endothermic compound, While negative sign refers to that the compound is more stable.

How to calculate bond energy?

The thermodynamics heat of formation and heat of atomization formula from the above table is used to calculate the bond energy of a molecule. Some workout examples are given below,

How to calculate heat of formation?

From the above data, the heat of formation of liquid alcohol = – 61 kcal. If there exist one or more resonating structure, the resonance energy is also taken for the bond these energies calculations.