Hard soft acid base theory or HSAB-principle proposed by Ralph Pearson in1963. It is very helpful for predicting the stability of acids bases in a chemical complex. 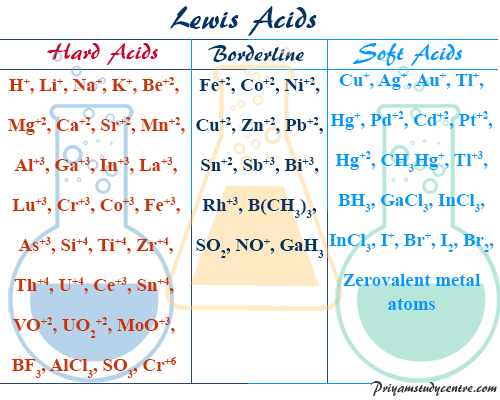 Lewis acid base theory explains the neutralization reaction of acids and bases in terms of electronic configuration with the formation of the complex by a coordinate covalent bond between the vacant orbital of acids and the filled orbital of the bases.

Hard acids have small acceptor atoms, high positive charge, and do not contain unshared pairs of electrons in their valence shell. All these properties may not appear in one and the same acids. Therefore, these basic properties lead to high electronegativity, low polarization, and hard to oxidize.

Soft acids have large acceptor atoms, low positive charge, and contain ushered pairs of electrons in their valence shell. All these properties may not appear in one and the same acid. This definition of acid leads to high polarity, low electronegativity, and electron affinity.

Definition of hard and soft base 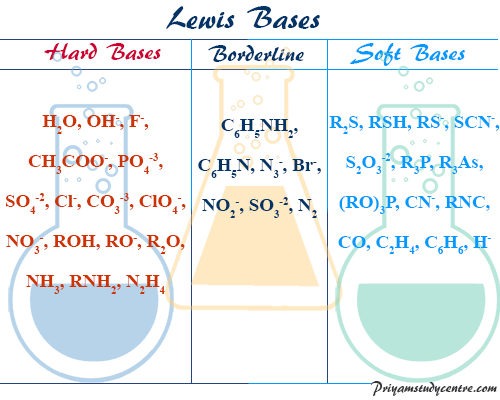 Question: Which of the following chemical compounds are soft and hard acids and bases,

This principle was proposed in 1963 by Ralph G. Pearson, according to the hard soft acid base or HSAB principle, the chemical complex is most stable when participating acids and bases are either both soft or hard. Hydrogen ion and methyl mercury (II) ion are used for this comparison in inorganic chemistry.

Hard or soft acid like hydrogen ion and methyl mercury ion has only one coordination position to form only one coordinate chemical bond. But these two cations are different in their preference for bases. The preference was estimated from the experimental determination of chemical equilibrium constants for the redox reaction.

The experimental results indicate that the bases in which nitrogen, oxygen, or fluorine is the donor atom, prefer to coordinate with the hydrogen ion.

But the bases in which phosphorus, sulfur, iodine, bromine, chlorine, or carbon is donor atom, prefer to coordinate with mercury.

Hard acids have small acceptor atoms and a positive charge while the bases have small donor atoms but often with a negative charge. Hence a strong ionic interaction will lead to the hard acid-base combination.

On the other hand, a soft acid-base combination is mainly a covalent interaction. Soft acids have large acceptor atoms, low positive charge, and contain ushered pairs of electrons in their valence shell.

The hard soft acid base or HSAB principle is extremely useful in elucidating many useful properties of learning chemistry.

Question: Why the behavior of boron in boron trifluoride and boron trihydride is different?

The concentration of certain ore on the earth’s surface can be rationalized by applying the hard-soft acid-base or HSAB principle.

The definition and chemical properties of the hard-soft acid-base combination list provide the occurrence of the complex ore in our environment.

Solution: In [CoF6]−3 and [CoI6]−3 both complexes of cobalt has a +3 oxidation number or state and act as a hard acid. But fluoride ion is a hard base and iodide ion is a soft base.

Problem: Why silver iodide is stable but silver fluoride not exist?

Therefore, from the HSAB principle, soft acid silver will prefer to combine with the soft base iodide ion. Hence silver iodide is stable but silver fluoride does not exist.

Therefore, due to lower stability mercury hydroxide dissolved readily in a low pH solution but mercury sulfide does not readily dissolve in low pH or acidic solution.