Conjugate acid base pair or protonic definition of acids and bases independently proposed by Bronsted and Lowery in 1923. According to this definition, an acid is a proton donor and a base is a proton acceptor in chemistry. 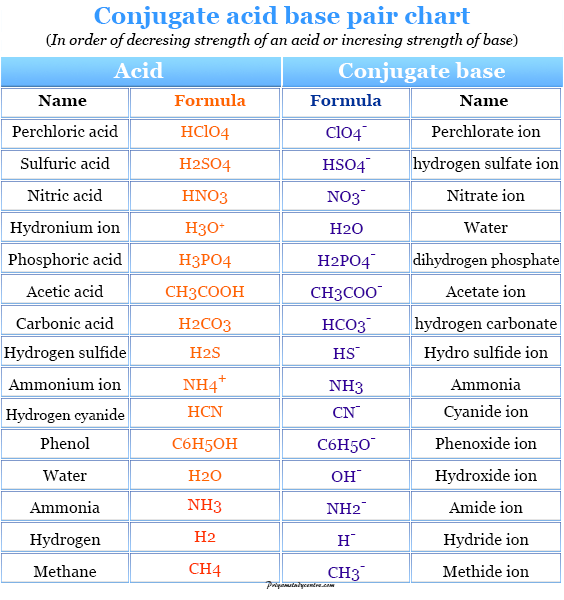 For learning chemistry, the conjugated acid base theory may be defined broadly as,

The neutralization reaction going through donates or accepts protons by acids and bases. Hence acids base pairs are the members of the balanced chemical equation that can be formed by mutual loss or gain of protons.

Conjugate acid-base theory can not explain the conjugate acid base phenomena in terms of electronic structure by the formation of the coordinate covalent bond between the vacant orbital and the orbital which contains lone pair of electrons. This can be explained by the Lewis acid base theory.

For example, nitric and sulfuric acid easily donate a proton to water to show acid character. Water easily accepts a proton from sulfuric or nitric acid to show base properties.

In the below list, we provide some examples of conjugated acid-base pairs with their name and formula.

How do you find the conjugate acid base pair?

When an acid release a proton, the residue must be a base and this can take up a proton to form the original one. The neutralization reaction involved two acids or two bases forming conjugated acids and base pairs.

in this reaction, proton plays a key role in acid base function. Hydrogen ion has a very high charge density and is effective for the electric polarization of other ions or molecules according to Fajan’s rules. Water accepts a proton from hydrochloric acid. Therefore, water is a conjugate base of HCl.

In the reverse reaction which at chemical equilibrium proceeds at the same rate as the forward reaction. Here H3O+ ion donates a proton to Cl− ion or Cl− ion accepts a proton from H3O+ ion. Therefore, HCl is the conjugate acid of water.

Which of the following is a conjugate acid-base pair?

Conjugate acid base pairs are formed from each other mutually by the gain or loss of protons. The equilibrium reaction involves two acids and two bases.

Some common examples for formation conjugate acids and bases are,

On the basis of Bronsted Lewary theory or protonic definition, the neutralization reaction involves acid1 and base1 forming one pair, and acid2 and base2 forming another conjugate acid base pair. 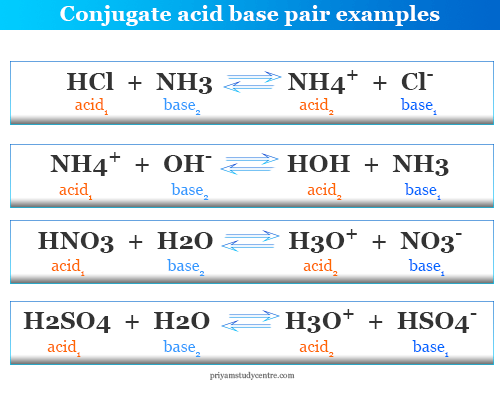 Conjugate base of weak acid

Methane, hydrogen peroxide, and hydrogen molecule are the weakest acids, and their conjugate bases are CH3−, H2O, and H−. These are consequently the strongest bases.

Polarity and acidity increase from methane to hydrogen fluoride. But after donating protons these acid molecules form conjugate bases. The basicity decreases from NH2− to F− ion. Therefore, the fluorine ion (F−) is a weak base, and NH2− ion is a strong base.

When we compare the strength of the conjugate base of hydrogen cyanide and acetic acid, the experimentally observed ionization or acidity constant at 25°C,
KCH3COOH = 1.8 × 10−5 and
KHCN = 4.0 × 10−10

Therefore, the acidity of acetic acid is greater than that of hydrogen cyanide.

The second method is comparative pyrolysis or thermal decomposition by specific heat. In this method, we determined the equilibrium concentration of the conjugate acid base.

Acid base and oxidation number

The acidic character of the conjugate acid base pair of oxyacids of the same chemical element increases with the increasing oxidation number.

For example, the oxyanions of a series of chlorine oxoacids HOCl, HClO2, HClO3, and HClO4 are ClO−, ClO2−1, ClO3−1, and ClO4− respectively. All these four acids have one protonated oxygen atom.

If we consider the conjugate acid base pair of the oxoacids of phosphorus this rule is not applied due to the structure of these oxoacids.