Benzene is a class of organic compounds or aromatic hydrocarbons having the chemical formula C6H6. It is a flammable and colorless or slightly yellow liquid used for the production of several chemical compounds. Benzene is also used as a solvent in chemistry for many chemicals. 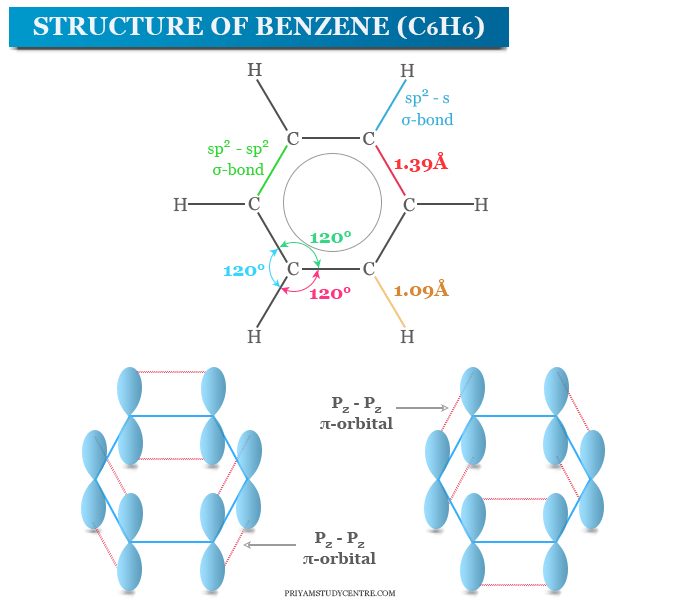 Analysis and molecular weight determinations show that the molecular formula of benzene is C6H6. All the carbon atoms in the benzene ring are sp2 hybridized. Each carbon atom has three sp2 atomic orbitals and one p orbital. Two sp2 orbitals of benzene form sp2-sp2 σ-bonds with two adjacent carbon atoms and one sp2 orbital forms carbon-hydrogen sp2-s σ-bond. Therefore, six carbon atoms form a planner ring in which C-H bonds are also co-planners.

The p-orbitals of six carbon atoms are parallel to each other and perpendicular to the plane. Any two of these p-orbitals can form a π-bond by side on overlapping. Therefore, all the bonds in benzene have a double bond character.

It is a colourless or light yellow organic compound with a peculiar smell. It is inflammable and burns with a smoky flame. Benzene is used as a good solvent for many chemical compounds. Therefore, it is used in dry cleaning.

All the six hydrogen atoms in the benzene ring lie in the same plane and each C-C-H bond angle is 120°. This geometry of benzene has been established by x-ray analysis. It shows that all the C-C bond lengths (1.397 Å) are the same. This value lies between that of a single bond (1.54 Å) and a double bond (1.33 Å). Therefore, all the bonds in benzene have a double bond character.

It is a very stable compound which slowly attacked by a solution containing chromic acid or acid permanganate to form carbon dioxide and water.

It can be reduced catalytically to cyclohexane but partially hydrogenated to form dihydro and tetrahydrobenzene. Nickel and platinum are the best chemical catalyst for hydrogenation. Copper chromite or copper barium chromite is useful for the desired reduction of the side chains.

It is converted to a mixture of cyclohexane and methyl cyclopentane when heated with hydrogen iodide at 250 °C. The action of chlorine and bromine on benzene depends on the conditions applied for the reaction.

Benzene was first synthesized in 1870 by Berthelot by passing acetylene in a red hot copper tube. It may be prepared in the laboratory in many other processes. The most important laboratory production process is given below the diagram, 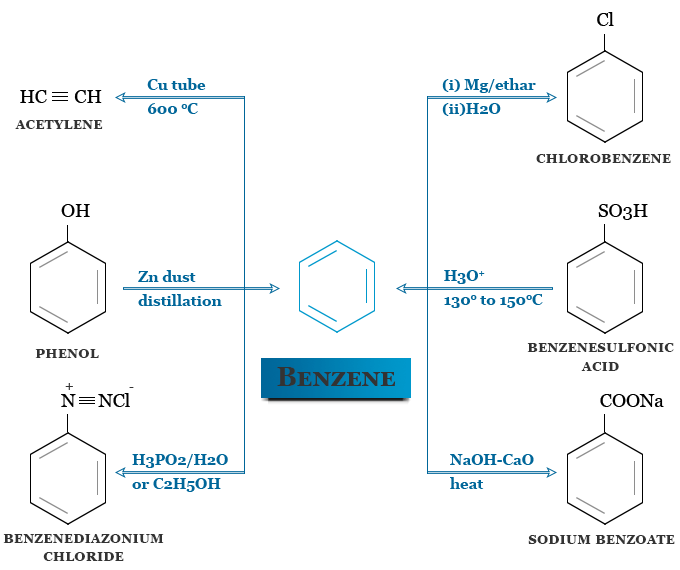 Aromatic compounds like Benzene, toluene, xylene, and ethylbenzene can also be extracted from petroleum where they occur naturally. They may be obtained by hydroforming and the thermal cracking of petroleum oils.

Hydroforming is carried out under pressure at 480 to 550 °C in the presence of chromium oxide on an alumina support. Benzene, toluene, xylene, and ethylbenzene are obtained by hydroforming n-hexane, n-heptane, and n-octane.

Various aromatic hydrocarbon obtained by the hydroforming process is separated by a selective solvent process but benzene is obtained by this process in far less amount. Therefore, toluene, xylene, ethylbenzene are converted to benzene by heating with hydrogen under pressure in presence of a metal oxide catalyst. It is called hydrodealkylation.
C6H5CH3 + H2 → C6H6 + CH4

Thermal cracking is an extraction or refining process in which high temperature and pressure are used to break down, rearrange, or combine hydrocarbon such as crude petroleum oil. Benzene, toluene, xylenes, naphthalene, anthracene, and many other polynuclear hydrocarbons have been isolated by the thermal cracking of alkanes.

Benzene is a major component of gasoline. Therefore, it is found naturally in crude oil. In 1988, most of the chemicals listed on the American Chemical Society (ACS) contained at least one benzene ring. Therefore, it is used in motor fuel and makes several industrial chemicals like rubbers, lubricants, dyes, detergents, drugs, explosives, and pesticides.

The most common uses of benzene are given below, 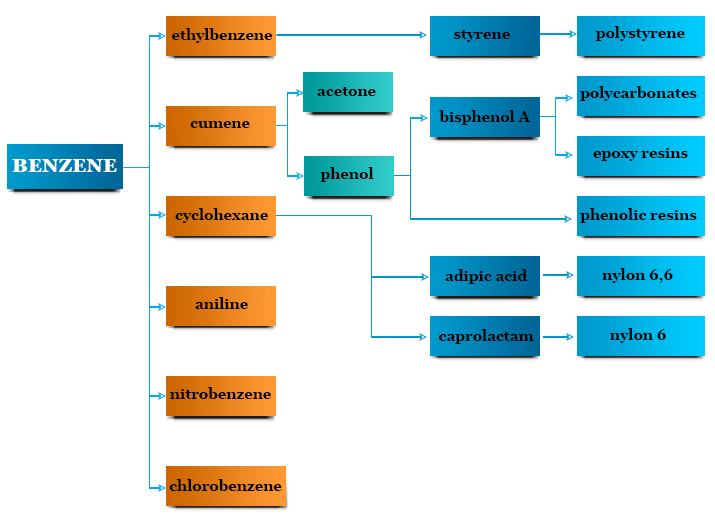 What is urea? Urea or carbamide is a very important nitrogenous product in protein metabolism and excreted about 30 g per day in the urine...