Chromium is a chemical element or hard, malleable, greyish white shiny transition metal of Group 6 (VIB) of the periodic table with atomic number 24 and symbol Cr. It is widely used in making stainless steel and other alloys. 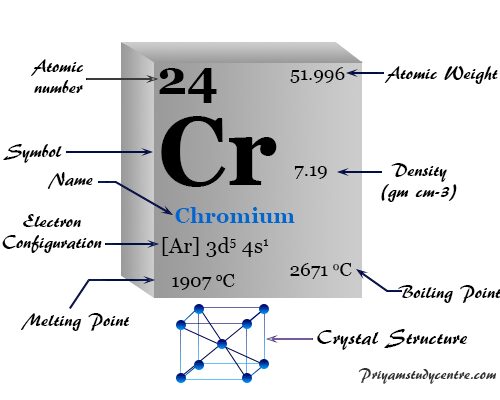 In1797, chromium was discovered by French chemist Nicolas-Louis Vauquelin from Siberian mineral-like PbCrO4, and the name of the element was derived from the Greek latter chroma means colour.

It is readily detected by the borax bead test (green) and the yellow melt of chromates is formed on fusion with alkali or an oxidizing agent. Chromates produce deep blue colour with hydrogen peroxide in acid solution.

Body-centered cubic crystal lattice, chromium has a valence shell electronic configuration [Ar] 3d5 4s1. The melting point and density of chromium are higher than those of vanadium. It suggests less participation of d-electron in metallic chemical bonding.

The oxidation state vs free energy diagram shows that the stable oxidation number or state of chromium is +3.

Chromium in the periodic table

It is placed in group 6 and period 4 of the periodic table. Chromium is a transition metal that lies between vanadium and manganese. 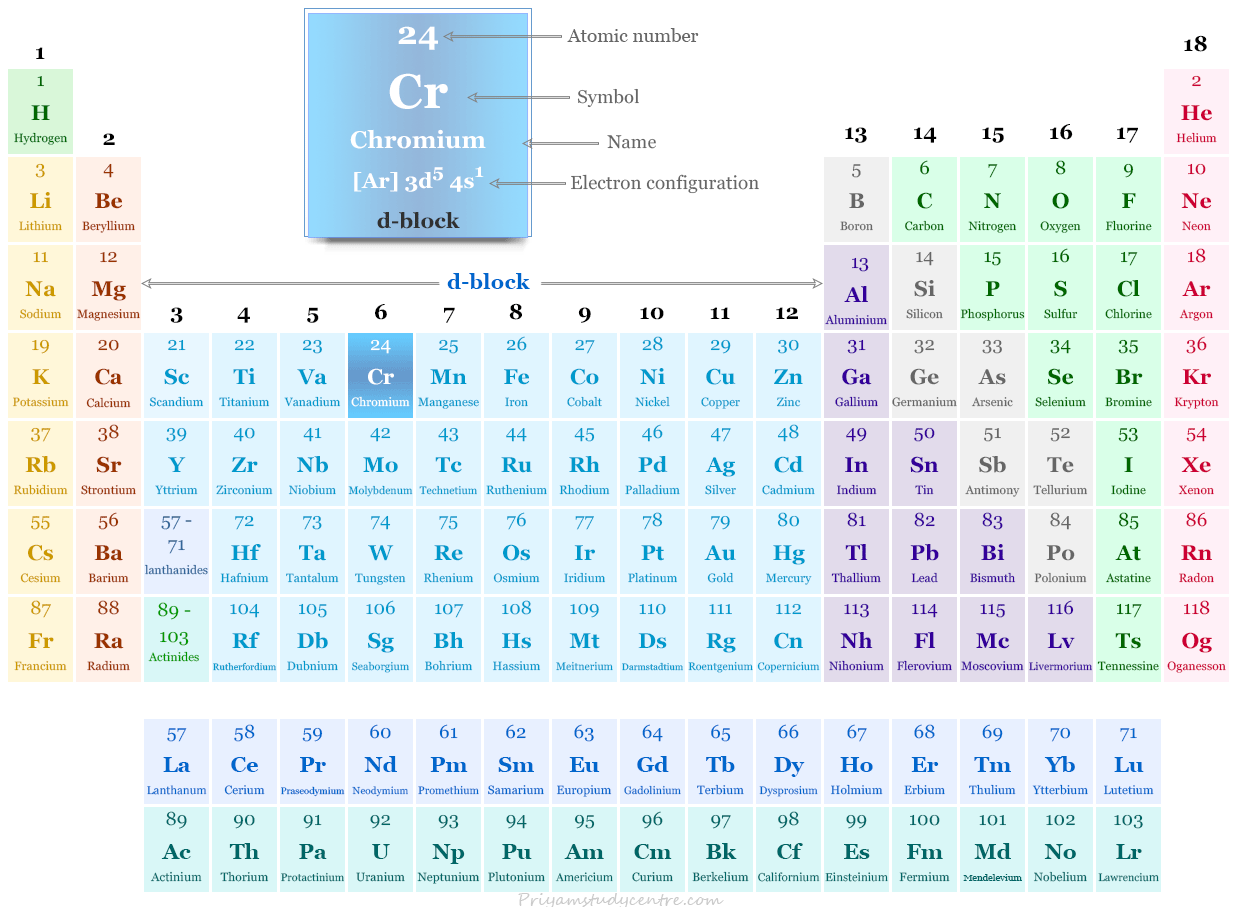 Where is chromium found?

It is the 21st most abundant chemical element in the earth’s crust (0.04 percent by weight). Chromium occurs mainly as chromite (FeCr2O4), found in South Africa, India, Philippines, Turkey, and Russian countries.

Crocoite (PbCrO4) and chrome ochre (Cr2O3) are the other minerals of the metal found in the earth’s environment.

In gemstones, some chromium ion (Cr+3) ions are substituted by aluminum (Al+3) ions. The presence of Cr+3 and Cr+4 ions in the earth’s environment strongly depend on the pH scale and oxidative properties of the soil of location.

The metallic chromium offers a fair number of Cr (II) compounds including oxides and dihalides. The oxides CrO, a black powder formed by exposing chromium amalgam to air. It is not well characterized.

The common and most stable oxidation state of the metal is Cr (III). It forms the most stable trivalent cation in water solution and a series of substituted inert metallic complexes. The oxide, Cr2O3 is formed by burning chromium in oxygen or heating ammonium dichromate.

The principal chromium oxide in the +VI state is CrO3. Chromium trioxide is formed by adding concentrated sulfuric acid to a concentrated aqueous solution of potassium dichromate.

The oxide is highly acidic and soluble in water solution to form H2CrO4 (pH scale = 1), HCrO4− (pH scale > 1), and Cr2O7−2. It is a powerful oxidizing agent that oxidizes most materials like paper, sugar, oxalic acid, and alcohol.

All the Cr (II) halides are reducing in nature, they can liberate hydrogen from water in absence of an oxidant.

All the three halides like CrCl3 (red-violet), CrBr3 (dark green), and CrI3 (dark green) are prepared by a direct combination of the metal with halides like chlorine, bromine, and iodine at various temperature regions.

Green colour, CrF3 is prepared by direct combination of the metal with fluorine but it may be prepared better by heating CrCl3 with HF at 500 °C.

The sulfide compounds can be made by direct reaction of chromium with sulfur or anhydrous CrCl3 with hydrogen sulfide.

Compounds of chromium (VI) are very impotent and limited, the principal species in the +6 state are CrO3, unstable CrF6, the oxohalides CrOX4 (X = F, Cl), CrO3X2, and CrO3X−, the oxoanions and peroxo molecule.

Chromyl chloride is the most important oxohalide of Cr (VI) formed when ionic chloride is heated with potassium dichromate and concentrated H2SO4.

Sodium or potassium chromates and dichromate are also two important chemicals of chromium widely used as an oxidizing agent and analysis of redox reaction.

About 85 percent of chromium is used in making stainless steel and other alloys in metallurgy, the reminder party used in different types of chemical, refractory, and industries. It makes steel tough and corrosion-resistant.