Rubidium is a chemical element of the alkali metal group in the periodic table with the symbol Rb and atomic number 37. It is a soft, low melting silvery white metal placed between potassium and caesium. 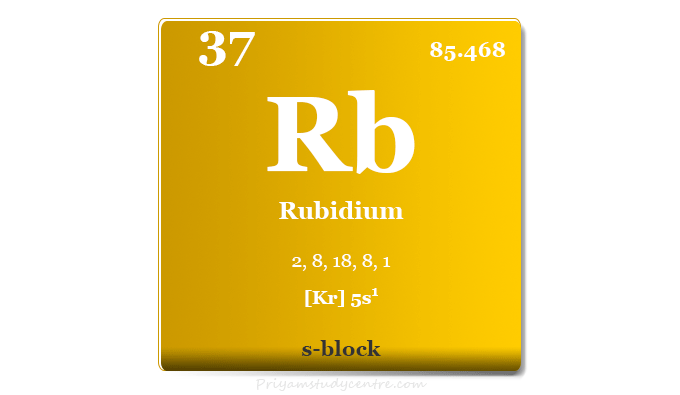 It is the first alkali metal that has a density higher than water. Like other alkali metals, it cannot be stored under atmospheric oxygen because in presence of oxygen it catches fire.

In 1861, German chemists Robert Bunsen and Gustav Kirchhoff discovered rubidium by flame spectroscopy or atomic absorption spectroscopy. The name of the metal was derived from the Latin word rubidus meaning deep red or from the color of its emission spectrum.

Extensive uses of Rb metal are yet to be explored but it can be used widely in photoelectric cells, vacuum tubes, and atomic clocks.

Where is rubidium found?

There is no single Rb-containing mineral found in the earth’s crust. It is obtained in the minerals pollucite, carnallite, leucite, and lepidolite. Lepidolite contains 0 to 3.5% Rb2O from which the metal is obtained as a by-product of the lithium industry.

Potassium minerals and brines are other commercial sources of rubidium metal.

It is present in the earth’s atmosphere with two isotopes.

Natural Rb is a radioactive element. 87Rb is a β active with a half-life of 8.8×109 years. Thirty additional rubidium isotopes have been synthesized by various nuclear reactions.

Rubidium is soft low melting and silvery-white metal of the alkali family. Only the outer ns electrons of the Rb atoms take part in metallic bonding. It makes the Rb soft and low meting. Rb adopts a body-centered cubic crystal structure.

It is slightly less reactive than caesium but more reactive than potassium. Rubidium is the second most electropositive alkali metal which reacts violently with water. It produces amalgams with mercury and alloys with transition metals gold, iron, and alkali metals caesium, sodium, and potassium.

The electronic configuration of Rb is [Kr] 5s1. It contains only one electron in the outermost quantum orbital. Therefore, it always shows a +1 oxidation state or oxidation number.

Rubidium in the periodic table

Rubidium is found in group 1 and period 5 in the periodic table. It is an alkali metal that lies along with lithium, sodium, potassium, caesium, and francium. 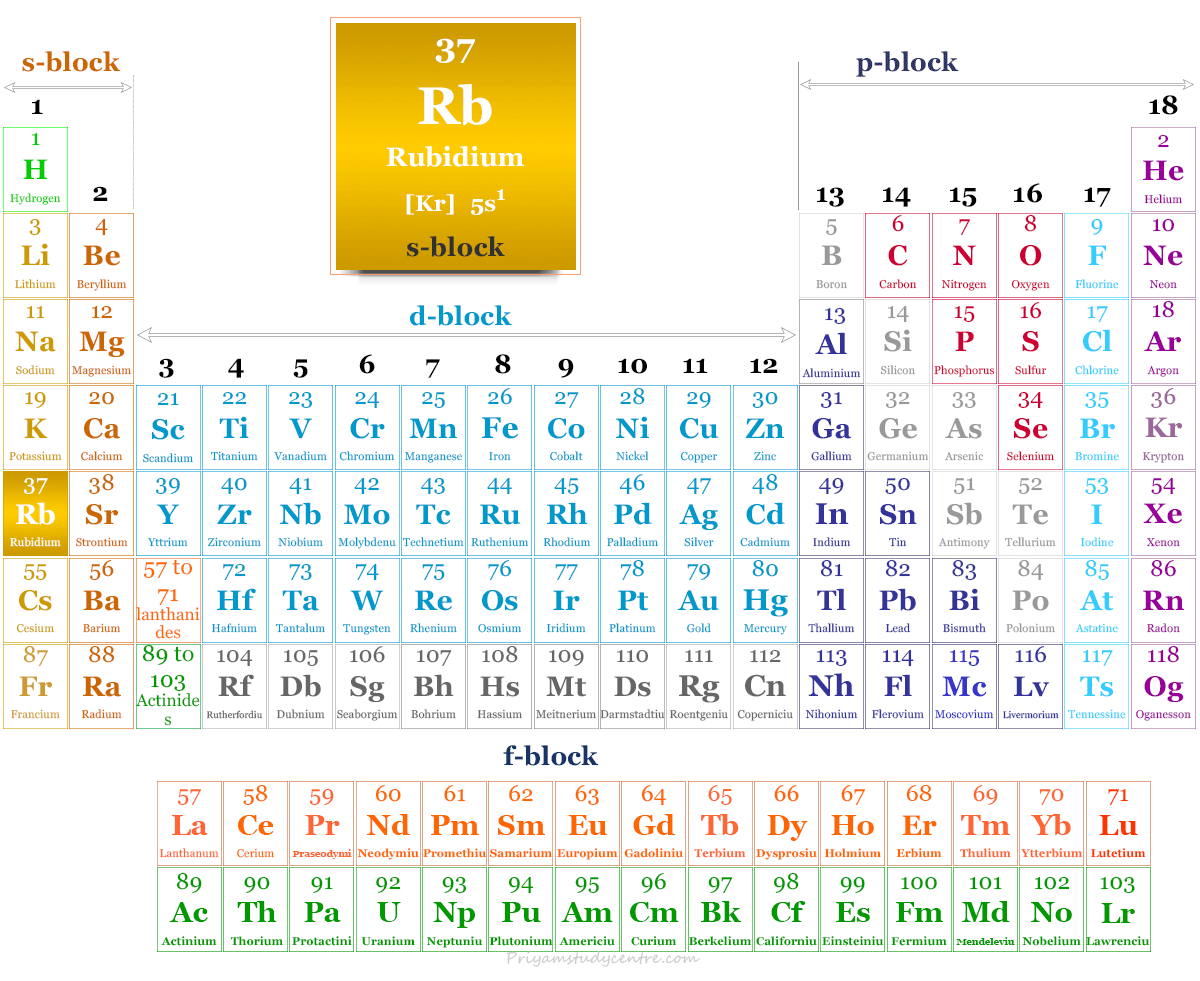 Rubidium reacts violently with air and water. It catches fires when exposed to air. To ensure safety, the metal is usually kept under dry mineral oil or sealed in glass ampoules.

The alkali metals Rb, and Cs are practically obtained as a by-product of the extraction of lithium from lepidolite. It is obtained by the reduction of fused chlorides with calcium metal at 750 °C under reduced pressure.

As the two elements, Rb and Cs occur together in minerals carnallite and lepidolite in very small quantities, their separation is a difficult job. The lower solubility of their alums is generally used for their separation.

The first ionization energy of rubidium is much less than that of the second ionization energy. Therefore, the major chemistry of Rb is in the form of an Rb+ ion. Most of the compounds are ionic in nature.

The alkali metals form a series of salts with different anions. They are usually high melting crystalline solids soluble in water. they conduct electricity in the molten state and in a solution of polar solvents.

It produced a number of oxides when exposed to air. Rubidium monoxide (Rb2O), Rb6O, and Rb9O2 are the most common oxides of Rb. Rubidium oxides are highly reactive to water. Therefore, they cannot occur in nature.

Rubidium chloride (chemical formula RbCl) is the most commonly used compound of Rb metal. It is used in living cells to take up the DNA molecules.

Like sodium hydroxide or potassium hydroxide, rubidium hydroxide (RbOH) is also a very strong base. It is a crystalline solid that is soluble in water and alcohol. It is the starting material for the production of rubidium-based chemical compounds.

Rubidium carbonate is a salt of Rb with the chemical formula Rb2CO3. It may be prepared by adding ammonium carbonate to RbOH.

It is a stable form of Rb in which the metal is usually sold. Rb2CO3 is used for making special types of optical glasses.

Extensive uses of rubidium metal are yet to be explored. The most common uses of metal are given below,