What is formic acid?

Formic acid or methanoic acid is a colourless, pungent, corrosive liquid or simplest carboxylic acid with the chemical formula H2CO2 or HCOOH. It is missable in all proportions with water and ethanol due to the formation of hydrogen bonding with water or ethanol molecule. 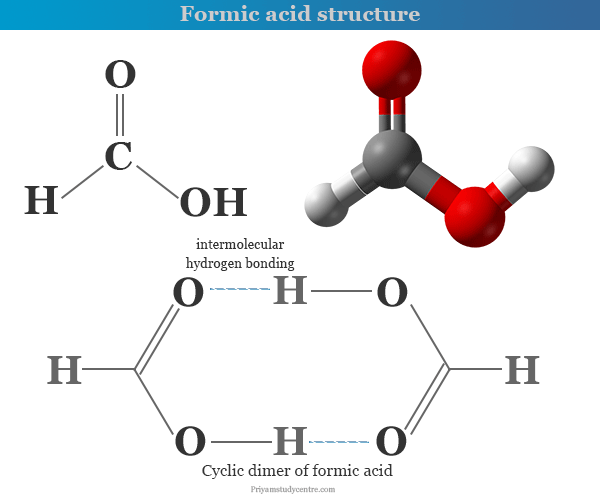 The gaseous formic acid does not obey ideal gas law due to the formation of hydrogen bonding. It is a stronger acid than any monocarboxylic acid like acetic acid.

It occurs naturally in the venom of bees and ants. Formic acid is used mainly for preservation and antibacterial agent in livestock feed.

Industrially, formic acid preparation is done by heating sodium hydroxide with carbon monoxide at 210 °C and 6 to 10 atmosphere pressure.

How formic acid is prepared in lab? 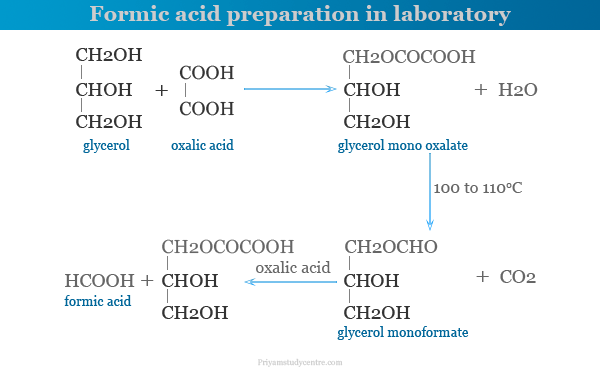 The aqueous formic acid solution cannot be fractionalized to give anhydrous acid due to the boiling point of the acid (100.5 °C). Therefore, an aqueous solution can be neutralized with lead carbonate.

Concentrate the solution until lead formate is crystallizing. The precipitate is dried and heated at 100 °C in a current of hydrogen sulfide.
(HCO2)2Pb + H2S → 2 HCO2H + PbS

The anhydrous acid produced by this method contains a small amount of hydrogen sulfide. It can be removed by adding dry lead tetraformate and redistilling.

It is prepared industrially by heating sodium hydroxide and carbon monoxide under 6 to 10 atmosphere pressure and 210 °C temperature.
NaOH + CO → HCOONa

Formic acid differs from the other member of the monocarboxylic acid series by its powerful reducing properties.

Methanoic acid is far less volatile than is to be expected from its molecular weight due to the formation of intermolecular hydrogen bonding. It exists as a dimer in vapour phase and aqueous solution. In the liquid phase, it exists as a polymer.

It can be dehydrated to carbon monoxide by concentrated sulfuric acid. When formic acid is heated under pressure at 160 °C temperature, it decomposes to form carbon dioxide and hydrogen.
CO + H2O ← HCOOH → CO2 + H2

When sodium and potassium formate is rapidly heated to 360 °C, hydrogen and oxalate are formed.
2 HCO2Na → (COONa)2 + H2