What is ethylene glycol?

Ethylene glycol or ethane-1,2-diol is a colourless viscous liquid with the formula (CH2OH)2. It is missable in all proportions with water and alcohol but insoluble in ether. The prefix glyc in ethylene glycol indicates that the organic compound has a sweet taste. 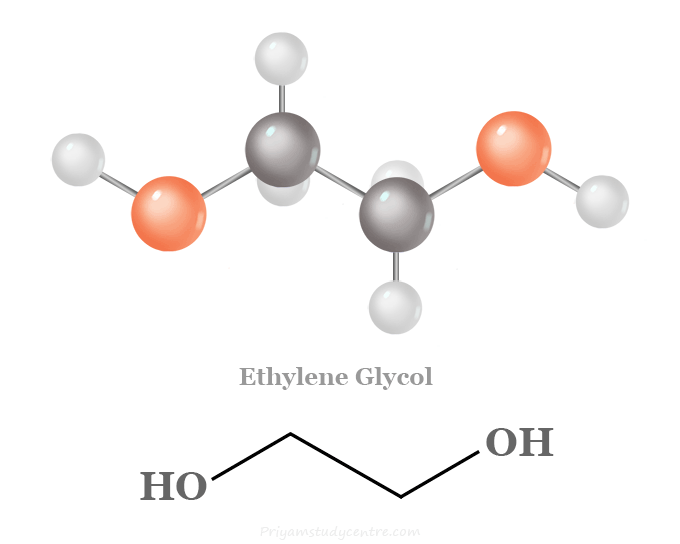 It is widely used as a solvent and antifreezing agent. In chemistry, ethylene glycol has a high viscosity, boiling point, and solubility due to the hydrogen bonding of all hydroxyl groups.

It is a highly poisonous dihydric alcohol containing two hydroxyl groups. The chemical properties and reactions of ethylene glycol are similar to those of primary alcohol.

One hydroxyl group is always completely attacked before the other reacts.

It is the simplest glycol that may be prepared by various synthesis methods given below the picture, 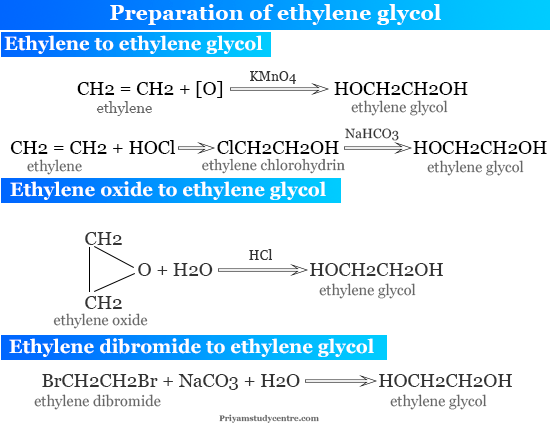 Industrially, it is produced by treating ethylene oxide with dilute hydrochloric acid. In presence of concentrated halogen acids, ethane-1,2-diol is converted into ethylene halohydrins.

In ethylene glycol, one hydroxyl group readily reacts before another. Sodium at 50 °C forms the monosodium salt. The di-sodium salt is obtained only when the temperature is raised to 160 °C.

It reacts with hydrogen chloride to form chlorohydrin at 160 °C. Whereas at 200 °C, ethane-1,2-diol produced ethylene dichloride.

Some important chemical reactions are given below the picture, 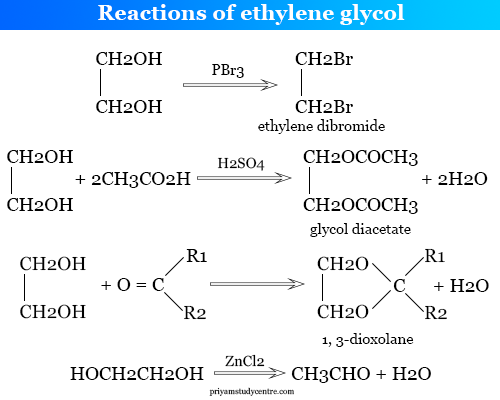 Di-ester is obtained when ethane-1,2-diol is treated with organic acids or inorganic oxo-acids. The obtained product is depending upon the relative amounts of glycol and acid.

For example, glycol diacetate is obtained when glycol heating with acetic acid in presence of a small amount of sulfuric acid.

When it is condensed with aldehydes or ketones in presence of p-toluene sulphonic acid, forms respective cyclic acetals or cyclic ketals. It is converted into aldehyde when heated with dehydrating agents like zinc chloride (ZnCl2).

It is oxidized with nitric acid to obtain glycolic acid and oxalic acid. Oxidation of glycols with acid, alkaline or neutral permanganate, acid dichromate, chromic acid or lead tetra-acetate, or periodic acid gives aldehyde, acids, or ketones by fusion of C-C chemical bond.

Oxidation of cis-glycol occurs more rapidly than the corresponding trans-glycol due to the formation of a cyclic intermediate. These oxidations are also influenced by strict hindrances. It is oxidized much faster than pinacol by periodic acid.

What is hydrocarbon? Hydrocarbon like aliphatic, aromatic, or polynuclear aromatic hydrocarbons are types of organic compounds processing hydrogen and carbon in the entire molecular formula....