What is heavy water?

Heavy water or deuterium oxide (D2O) is a form of water that contains only deuterium isotopes rather than the common hydrogen in its molecular formula. The deuterium content of water may be determined from the measurement of density, refractive index, infrared spectroscopy, or mass spectrometry. Heavy water uses widely as a moderator in nuclear power reactors, and studies reaction mechanisms and reaction kinetics in chemistry. 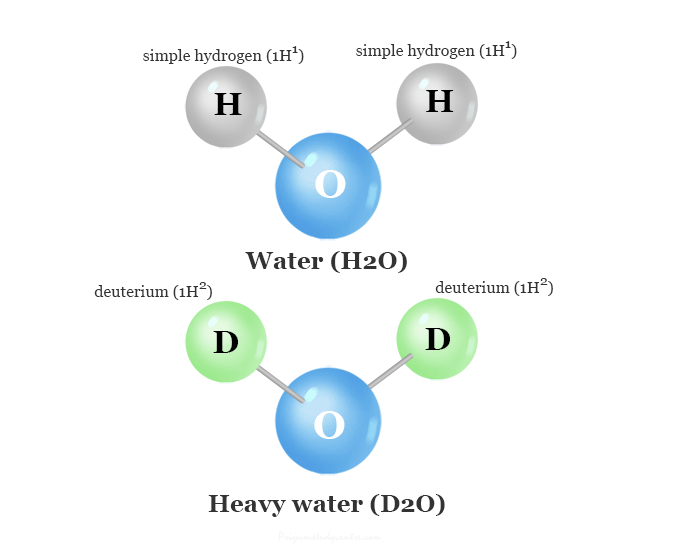 The properties like boiling point, density, and pH value of heavy water are slightly higher than that of normal water.

Semiheavy water is formed by replacing one protium (1H1) in light water with deuterium (1H2). Therefore, the chemical formula of semiheavy water is HDO. A water sample containing an equal ratio of protium and deuterium forms 50% semiheavy water, 25% normal water, and 25% heavy water. There is a dynamic equilibrium between HDO, D2O, and H2O.

Heavy oxygen water is formed by the enrichment of heavier oxygen isotopes 17O and 18O in light water. These are commercially available and denser than normal water. It is more expensive than D2O because it is difficult to produce. Heavy oxygen water containing 18O isotope is used for the production of fluorine-18. The isotope 18F is used in radiopharmaceuticals and radiotracers, positron emission tomography.

Tritium is made by an artificial nuclear reaction of 3Li6 with neutrons. Lithium which uses in such transformation is taken in the form of an aluminum or magnesium alloy.
3Li6 + 1n0 → 2He4 + 1H3 (tritium)

Tritiated water may be used to measure the total volume of water in our bodies.

Technically, deuterium is not made by any specific process. Therefore, heavy water is separated from large quantities of water containing H2O or singly deuterated water in the Girdler sulfide process.

D2O is made by enrichment of ordinary water by repeated electrolysis. The overvoltage for the discharge of D+ ions is higher than that of H+ ions. Therefore, hydrogen gas is evolved in the electrolysis of ordinary water. The residual water becomes gradually richer in deuterium.

Heavy water is made by the repeated electrolysis of alkaline water or water containing 0.5 N sodium hydroxide (NaOH). The process is carried out for many days using a nickel electrode and a large current density till the volume goes down to one-tenth. The alkali is removed by the treatment of carbon dioxide. The water is recovered by distillation and electrolysis is started again. 99.0 % heavy water is obtained when the volume is reduced from 28000 to 1.

The Girdler sulfide process is a method that works based on an exchange of deuterium between hydrogen sulfide and regular light water. At present, water is enriched to 15 % deuterium content by the chemical exchange. It utilizes the small differences in free energy of hydrogen and deuterium from different compounds.

The H2O-H2S exchange may be used successfully on a large scale to produce 99 % D2O.

Argentina, Germany, the United States, India, Japan, Norway, Sweden, and Canada are the largest producer or exporters of D2O in the world.