What is ethylene oxide?

Ethylene oxide is a cyclic ether or simple epoxide compound with the molecular formula C2H4O. In ethylene oxide structure, an oxygen atom is linked to the two carbon atoms with a three-member cyclic ring. 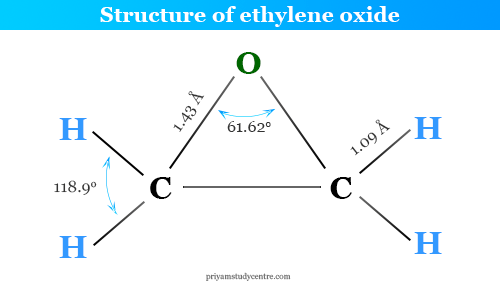 It is a colourless gas with a boiling point of 10.7 °C. The viscosity of liquid ethylene oxide is much lower than that of water.

Industrially, it has been produced by passing ethylene and air under pressure over a silver catalyst at 200 to 400 °C. A large volume of EtO is used for making different chemicals like ethylene glycol, cellosolve, etc. It is also used for the sterilization of medical equipment.

According to the IUPAC system of nomenclature, it is denoted by the prefix epoxy. Thus, EtO is called epoxyethane. It is named oxiran due to the presence of the oxiran ring. Oxiran compounds are also referred to as cyclic ethers or alkenes oxides. 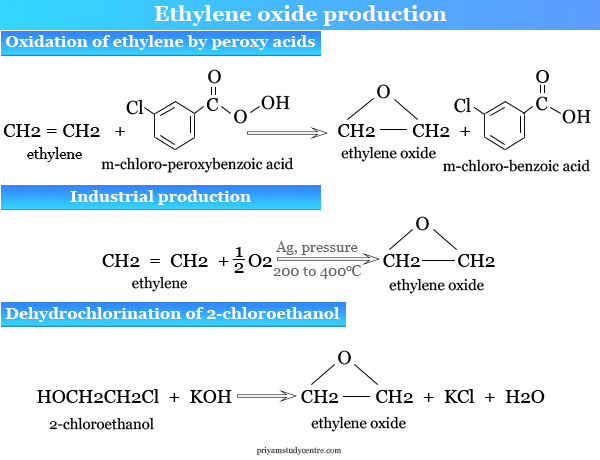 Oxidation of ethylene by peroxy acids

It has been found that peroxy trifluoroacetic acid is a very good reagent for epoxidation and hydroxylation. It is converted double bond of ethylene into an epoxide.

It is manufactured by passing ethylene and air under pressure over a chemical catalyst like silver at 200 to 400 °C.

It undergoes molecular rearrangement on heating to form acetaldehyde.

It is a symmetrical epoxide that is reduced by lithium aluminum hydride to form ethyl alcohol.

For unsymmetrical epoxides, the main product is more highly substituted alcohol. It is readily reduced to the corresponding alkenes by t-phosphines.

Methyl cellosolve or monomethyl ether is prepared by heating ethylene oxide with methanol under pressure. Cellosolves are very useful solvents since they contain both alcohol and ether functional groups.

Ethylene oxide is converted into ethylene glycol in a dilute acid solution. It also produced mono-ethers with alcohol in presence of a small amount of acid.

The mechanism of the reaction in acid media follows the steps given in the picture, 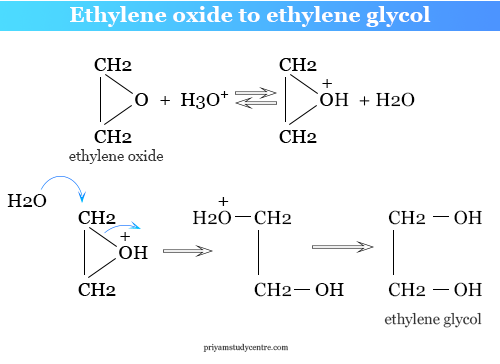 What is acetic acid? Acetic acid also called ethanoic acid has the molecular formula CH3COOH and prepared industrially by various methods. Commonly it is used...