Helium is a noble gas or group-18 element of the periodic table with the chemical symbol He and atomic number 2. It is the second most abundant chemical element in the earth’s universe after hydrogen. Helium is a colorless, orderless, and tasteless gas and liquid at −268 °C. 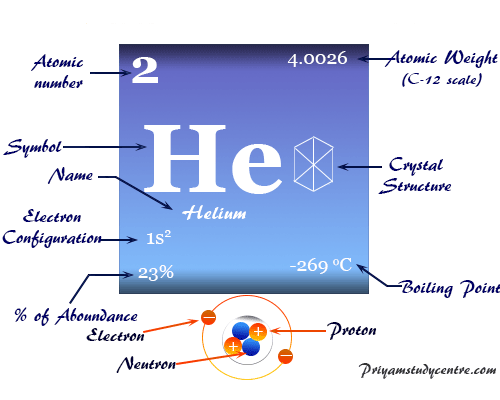 It formed in the thermonuclear reactions on stars. Very negligible extent of helium present in the earth’s atmosphere due to the lightness of gas.

The boiling and freezing point of helium is lower than any known chemical substance in the universe. It cannot be solidified by sufficient cooling at normal atmospheric pressure.

Prior to 1960 helium, neon, argon, krypton, xenon, and radon were belong to the family of inert or rare gases. Now, these are named noble gases. The noble gases were not known in Mendeleev’s time.

Today all the noble gases like He, Ne, Ar, Kr, Xe, and Rn are discovered. They are characterized by their extreme inertness which separates these from other elements of the periodic table.

The helium atom (atomic number = 2 and mass number = 4) has two protons and neutrons in the nucleus and two extranuclear electrons surrounding the nucleus of the He atom.

A new yellow line close to Sodium-D lines was observed by English astronomer Joseph Norman Lockyer and chemist Edward Frankland in the electromagnetic spectrum of the sun chromophore recorded during the total solar eclipse on 18 August. Lockyer and Frankland observed the facts to discover a new chemical element, named helium (Greek halos means sun), the only element found before the earth.

The same line was observed by L. Palmieri in the spectrum of volcanic gases from Mt. Vesuvius. Lord Rayleigh observed helium when isolated nitrogen gas from atmospheric gases.

In 1895, the British chemist Sir William Ramsay identified it in uranium minerals.

The noble gas helium contains 23 percent of the mass of our universe. It is formed during the thermonuclear reaction (nuclear fusion) in stars.

It occurs 5.24 ppm by volume in dry air and 3 × 10−3 ppm by weight in radioactive minerals, meteoric iron, and mineral springs.

The gas consists of two stable isotopes with chemical formulas 4He and 3He. The isotope 2He4 is formed on earth by alpha particle decay of radioactive elements but 2He3 is formed by nuclear reactions induced by cosmic radiations.

Where is helium found?

The most economical source of helium is natural gas. Usually, the gas is present to the extent of 0.1 to 2 percent. Some samples of the United States (Texas, New Mexico, Kansas, Oklahoma, Arizona, and Utah) contains 7 percent of He.

About 3400 tonnes of helium are recovered annually in the United States alone from natural gas. Eastern Europe, Algeria, Australia, Poland, Qatar, and Russia are good producers of noble gas helium.

The thorium mineral (monazite sand) contains 1 ml of helium per gram substances. It may be recovered by heating the sand in a vacuum at 1000 °C or digesting it with sulfuric acid. The most common isotopes, 3He and 4He are obtained by alpha ray decay and cosmic radiation of radioactive isotopes.

Helium on the periodic table

Helium is placed in group 18 and period 1 of the periodic table with other noble gases. 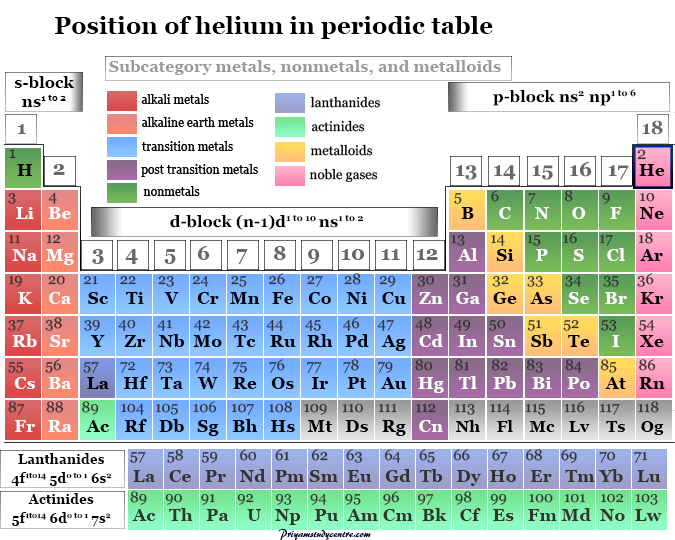 In solid-state, neon, argon, Krypton, Xenon, and Radon form a face-centered cubic crystal lattice. The forces of attraction between He atoms (normal phase) are so small that suggests that the zero-point vibrational energy is not sufficient for liquid and solid formation.

The zero-point energy influence the crystal structure of helium atoms. At 1 K temperature and 25 atmospheres pressure, 4He has a hexagonal closed packed crystal structure but lighter 3He adopts body-centered cubic crystalline solid.

We do not expect the lighter noble gases like helium, neon, and argon to form any chemical compounds due to their very high ionization energy. These elements may act as strong electron pairs donner to strong Lewis acids.

Some support for the idea comes through the characterization of several XHe+ species in interstellar spaces, where x= an electron-deficient radical. It has been suggested that a number of acetylene derivatives of helium may have sufficient stability.

Cations like He+ and He2+ are produced in the mass spectrometers. At first, He+ formed when a He atom collides with an energetic electron in a high vacuum
He + e → He+ + 2e

Such ions are kept away from the walls of the vessel by magnetic and electric fields and allowed to reach the collector plates of detectors.

If the pressure inside the spectrometer is suitably adjusted (10−5 mm Hg), the He+ ion will combine with a neutral helium atom to form an He2+ ion. Such species are stable only in a vacuum. They have a chemical bond order of 0.5 and unusually high bond energy.

Liquid helium (4He), when cooled below the normal boing point, it undergoes a transition from He-I to He-II at 2.2K temperature. When the evocation continues without turbulence, the thermal conductivity raises by a factor of 106, the specific heat increases by a factor of 10 and the viscosity becomes effectively zero.

These physical properties of helium describe the characteristics of a superfluid which may be explained by quantum chemistry or physics.

After hydrogen, it is the second most abundant chemical element in the universe. It is produced from natural gas, thermonuclear reactions, and alpha decay of radioactive minerals.

It is primarily obtained from natural gas. The hydrocarbon is liquefied at about −150 °C and helium gas is pumped out.

What is helium used for?

Iodine element Iodine is a chemical element of Group 17 (VIIA) of the periodic table. It is a member of the halogen family with atomic...