Ethylene is a simple organic compound or unsaturated hydrocarbon that contains a double bond with the molecular formula C2H4 or CH2=CH2. 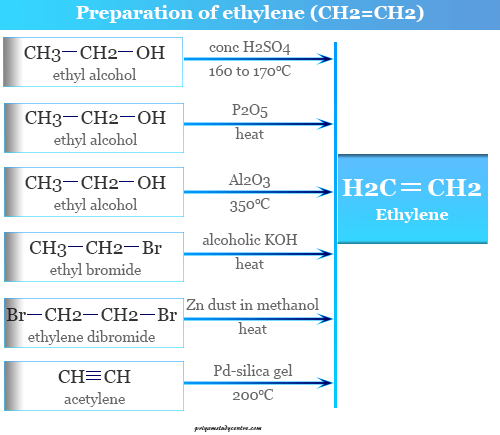 It may be prepared by most of the general methods of preparation of alkenes or olefins. The most important laboratory method for the production of ethylene gas is heating ethanol with concentrated sulfuric acid.

Two carbon atoms in ethane have the power to combine six hydrogen atoms. In the CH2=CH2 structure, four univalent hydrogen atoms are present. Therefore, ethylene is an unsaturated hydrocarbon in organic chemistry.

The excited-state electronic configuration of carbon atom in the ethylene molecule is 2s1 2px1 2py1 2px1. One s-orbital and two p-orbitals combine to form sp2 hybridized orbitals in the ethylene gas molecule. The remaining 2pz orbitals of two carbon atoms used for the formation of pi-bonding in the CH2=CH2 molecule are shown in the below picture. 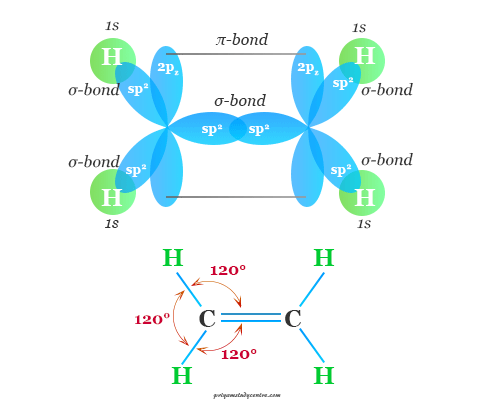 Huge quantities of ethylene are produced by the creaking of crude oil or petroleum.

It was also prepared by the dehydration of ethanol by phosphorus pentoxide (P2O5) or alumina (Al2O3) at 350 °C.

Ethylene may be prepared by the action of ethanolic potassium hydroxide on ethyl chloride or bromide.

1, 1, or 1, 2 dihalogen derivatives of ethane are dehalogenation by zinc dust in methanol to produce ethylene gas. This method is not useful for the preparation of CH2=CH2 but it is very useful for the purification of ethylene.

It may be prepared by hydrogenation of acetylene by palladium in silica gel at 200 °C.

It is a colourless gas with a boiling point of −105 °C. It is sparingly soluble in water but soluble in alcohol or ether. It burns in the air with a smoky luminous flame. When CH2=CH2 is heated with chlorine at 350 to 450 °C, it formed vinyl chloride.

Ethylene oxide is manufactured by passing CH2=CH2 and air under pressure over a silver catalyst at 200 to 400 °C.

It polymerized under high pressure and high temperature to form polyethylene or polythene. Polythene is also manufactured by the Ziegler process. 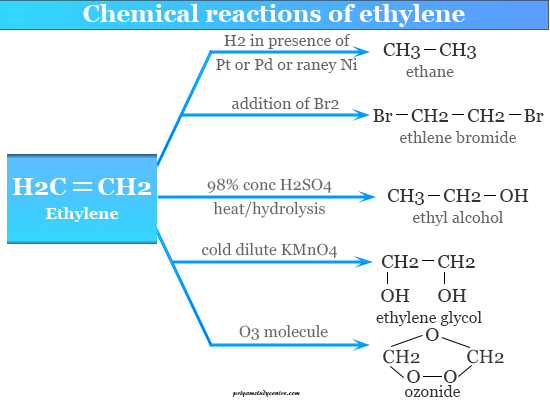 It is readily hydrogenated under pressure in presence of chemical catalyst like platinum and palladium at room temperature.

Nickel catalyst is used under 200 to 300°C. Raney nickel is an effective catalyst at room temperature and atmospheric pressure.

For example, CH2=CH2 adds hydrogen bromide to form ethylene bromide. The order of reactivity of the addition of halogen acids is HI > HBr > HCl > HF. It is hydrated to ethanol by absorption of concentrated sulfuric acid followed by hydrolysis.

It is readily hydroxylated or adding hydroxyl groups to form glycols. By cold dilute alkaline permanganate solution, it is converted into cis-ethylene glycol.

It adds ozone gas molecules to form an ozonide compound. The ozonide is oxidized by a silver oxide or hydrogen peroxide, or peracids to form formic acid.

Reduction of ozonide with zinc dust to form formaldehyde. Reduction may also be carried out with lithium aluminum hydride or sodium borohydride to form corresponding alcohol.