Urea or carbamide is a very important nitrogenous product in protein metabolism and excreted about 30 g per day in the urine by adults. Urea is a white crystalline solid organic compound with the chemical formula CO(NH2)2. It can be manufactured industrially by the interaction of liquid ammonia and carbon dioxide. It is used mainly for the production of urea formaldehyde resin or plastics and nitrogen containing fertilizers. 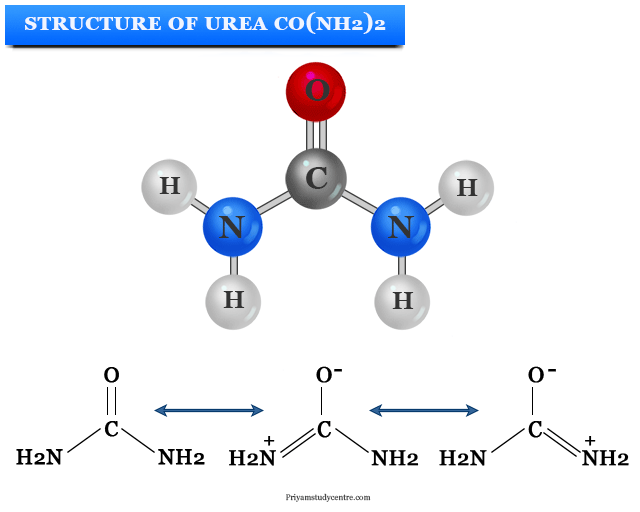 It is soluble in water and ethanol but insoluble in ether. Friedrich Wöhler in 1828 converted the inorganic compound ammonium cyanate into urea which is an organic compound obtained from animal sources. The diamide structure of urea can be indicated by its synthesis from carbonyl chloride and ammonia.

The physical method of structure determination shows that the diamide planer structure of urea is correct in solid-state. Crystal studies show that both nitrogen atoms in CO(NH2)2 are identical. The carbon atom is sp2 hybridized with the C-N bond length of 1.37 angstrom.

The C-N bonds have a significant double bond character which can be explained by the resonance structure of the urea molecule. Both the nitrogen atoms are identical in the hybrid molecule. Therefore, carbonyl oxygen is more basic compared to formaldehyde molecules. The high aqueous solubility of urea reflects the extensive hydrogen bonding with the water molecule.

Most of the industrial production is used for making nitrogen releasing fertilizer in agriculture industries. It is a raw material used for the production of chemical compounds like hydrazine and urea nitrate or formaldehyde resins or melamine-formaldehyde. Urea nitrate is a high explosive compound. It is also used in the automobile and pharmaceutical industries.

It is the most common nitrogenous fertilizer which we use widely in soil. It can be broken down in the soil to give ammonium salt which can be taken up by plants as a nutrient. In some soil, ammonium salt can be oxidized to form nitrate. It is also a good plant nutrient.

It is a nontransparent thermosetting resin or polymer which we obtained from urea and formaldehyde. These types of resins are used in adhesives, plywood, particleboard, fibreboard, and molded objects. UF and related amino resins are used mostly in automobiles, textiles, paper, and electrical industries. In agriculture, we also used it as a slow source of nitrogen.

Urea-containing creams are used to treat dry or rough skin problems like eczema, psoriasis, corns, callus, and nail problems like ingrown nails. It has keratolytic properties. Therefore, it can increase moisture in the skin by softening or dissolving.

We apply low levels of urea on skin or nails due to its toxic properties. Therefore, it cannot use on sensitive areas like eyes, lips, mouth, nose, vaginal, and groin areas.

We used the blood urea nitrogen (BUN) test to measure the amount of nitrogen in the blood that comes from urea. High urea levels influence several biological functions like diet, dehydration, and liver function.

Automotive AdBlue or Diesel Exhaust Fluid (DEF) is the trademark for AUS32 which contains 32.5% of aqueous urea solution. Vehicles that have a Selective catalytic reduction (SCR) system can use AdBlue to reduce the harmful NOx gases from the internal combustion diesel, dual fuel, and lean-burn natural gas engines.

It is the first organic compound that was made in the laboratory and used as a powerful protein denaturant. It can be also used as a hydrogen source in fuel cells. The electrolysis of urea solution is used for the production of hydrogen at low voltage.

It is a white crystalline solid soluble in water and ethanol but insoluble in ether. Normally crystal structure of urea is closed packed but in the presence of various straight chin molecules like n-alkenes, n-alcohols, n-acids, and n-ester, it has the ability to trap these organic compounds.

It behaves as a monoacidic base that formed nitrate or oxalate salt with nitric acid or oxalic acid. When urea nitrate is added to cold concentrated sulfuric acid, nitrourea is formed.
NH2CONH2.HNO3 → NH2CONHNO2 + H2O

It can be hydrolysis by boiling with acid and alkalies to form carbon dioxide and ammonia. The same change can occur with the enzyme urease which presents in soybeans.
CO(NH2)2 + H2O → CO2 + 2NH3

It can react with acid chlorides and acid anhydride to form ureides. For example, acetyl chloride forms acetylurea. Many of these ureides are used as drugs in medicine.
CH2COCl + NH2CONH2 → CH2CONHCONH2 + HCl

It reacts with the malonic ester to form barbituric acid. Barbituric acid is an important constituent for the laboratory synthesis of riboflavin or vitamin B2.

When gently heated, urea can be lost ammonia to form a biuret compound. The aqueous biuret solution can produce violet solution when treated with sodium hydroxide and a drop of copper sulfate solution. It is known as the biuret test. The Biuret test can be used for the identification of compounds that contains the -CONH group in proteins.

How is urea fertilizer made?

Industrially, it can be made by interacting liquid carbon dioxide and liquid ammonia at 130 to 150 °C temperature and 50 atm pressures.

Can urea be used as an explosive?

It is a raw material used for the production of urea nitrate (NH2CONH2.HNO3) which is a high explosive.

What urea does to skin?

Urea-containing creams are used to treat dry or rough skin problems but larger quantities can cause irritation on the skin. A low level of urea can increase moisture in the skin by softening or dissolving.