Formaldehyde or methanal is a colorless, pungent smelling gas or organic compound with the chemical formula HCHO. It is a powerful disinfectant or antiseptic which is extremely soluble in water. Formaldehyde uses mainly for the manufacture of dyes, resins, and plastics. The chemical structure, Lewis structure, and hybridization of the HCHO molecule are given below the picture, 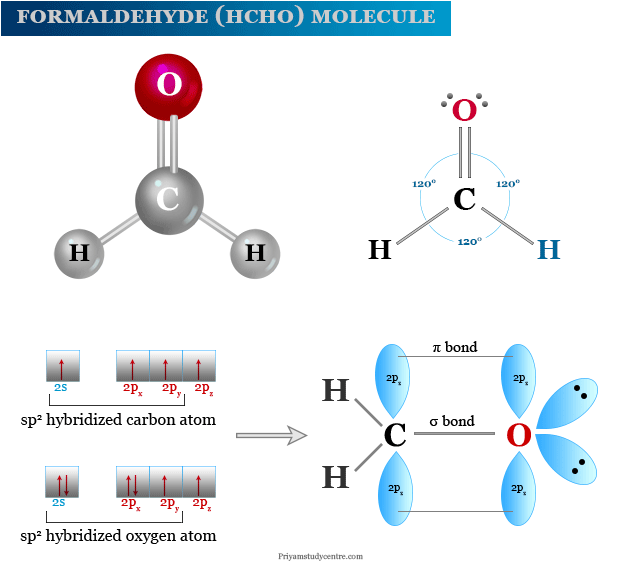 It is prepared industrially by air oxidation of methanol in presence of a silver catalyst at 400 °C. Pure aqueous formaldehyde solution may be obtained by refluxing paraformaldehyde with water and stored as a formalin solution.

A very low level of formaldehyde molecule is found in most living organisms. Due to its carcinogenic properties, formaldehyde can be adverse effects on our health.

Methanal is the simple aldehyde that contains carbon, hydrogen, and oxygen in its structure.

The carbon and oxygen atoms in the formaldehyde molecule are sp2 hybridized. The sp2 hybridized carbon atom is attached to two hydrogen atoms by a single chemical bonding and bonded to the oxygen atom by one sigma and one pi bond or a double bond.

The chemical formula of paraformaldehyde is HO(CH2O)nH, where n has values between 6 to 50. It is a form of formaldehyde polymers.

Due to its carcinogenic properties, the European Union has banned the use of formaldehyde in personal care products.

The colorless, pungent smelling aldehyde like formaldehyde is highly soluble in water. A saturated formalin solution contains 40 percent of formaldehyde, 8 percent of methanol, and 52 percent of water.

It is a useful disinfectant that kills several types of bacteria and fungi.

It has no alpha-hydrogen. Therefore, it participates in the Cannizzaro reaction in which two molecules of HCHO are involved. One molecule is converted into methanol and the other is converted into sodium salt of formic acid.
2 HCHO + NaOH → HCOONa + CH3OH

It can also participate in the crossed Cannizzaro reaction. The nature of the final product depends on the structure of another aldehyde. For example, benzaldehyde forms benzyl alcohol.

In a dilute aqueous solution, it can be 100 percent dehydrated to form methylene glycol with the molecular formula CH2(OH)2. It is another form of HCHO.
HCHO + H2O → CH2(OH)2

It can be treated with concentrated sulfuric acid to form polyoxymethylenes, (CH2O)n, H2O, where n is greater than 100. Polyoxymethylenes are white solids that are insoluble in water and reform HCHO when heated.

Formaldehyde gas is slowly polymerized to give trioxymethylene, metaformaldehyde, or 1,3,5-trioxane.

Metaformaldehyde or 1,3,5-Trioxane is a white solid with the molecular formula (CH2O)3.  It can be prepared by distilling formaldehyde solution with a little amount of sulfuric acid.

It is found naturally in our environment. About 90 percent of HCHO is obtained in the upper atmosphere. It is formed in the environment by the combustion or oxidation of methane and other hydrocarbons in presence of sunlight.

It is formed from different construction materials effects our environment and causes air pollution. The high level of formaldehyde has adverse effects on human health. It causes eyes, nose, skin irritation, burning sensation in the throat, headaches, and difficulty in breathing.

In 2011, the US National Toxicology Program suggested that formaldehyde is a human carcinogen.

A low level of HCHO is found in most living organisms. It is an intermediate that is formed in the metabolism of amino acids.

It can be naturally present in fruits and vegetables like pear, apple, green onion, etc. Meats, Bombay-duck, codfish, crustaceans, and dried mushrooms are other common sources of formaldehyde.

It was first prepared in 1859 by the Russian chemist Aleksandr Butlerov but he cannot identify the gas.

It was first identified by August Wilhelm von Hofmann. He produced formaldehyde by dehydrogenation or air oxidation of methanol vapor in presence of a silver catalyst. Present-day it is the most common industrial route for the production of formaldehyde.

It can also be produced by the air oxidation of methane from natural gas in presence of various metallic oxides. This route of production of formaldehyde is not used industrially because methanol is more easily oxidized than methane.

What is hydrogen sulfide? Hydrogen sulfide (chemical formula H2S) is a colorless, flammable, toxic, or poisonous gas molecule that can be detected by its smell...