Francium is a chemical element of the alkali metal family in the periodic table with the symbol Fr and atomic number 87. It is a soft, low, melting, silvery white metal placed along with lithium, sodium, potassium, rubidium, and caesium. 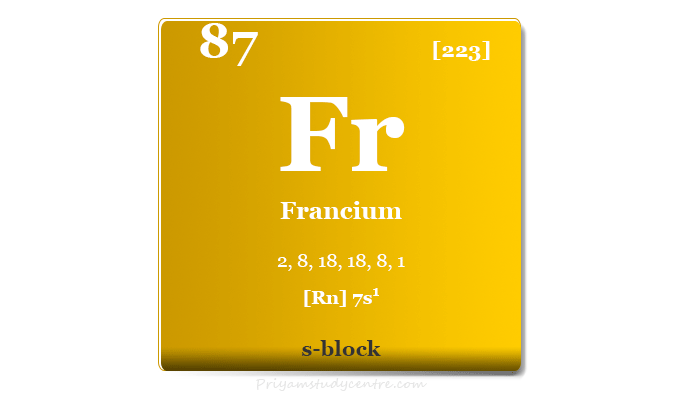 The electronic configuration of a francium atom is [Rn] 7s1. Therefore, it was the last member of the alkali metal family and missing for a long period.

It is a very rare chemical element and not found outside the laboratory. A trace amount of francium is found in uranium and thorium ores.

Francium cannot be used for any commercial purposes. It is used only for research purposes in the field of chemistry. The study of Fr provides useful information about the atomic structure such as elementary particles and the energy levels of an atom.

The most stable isotope, Fr-223 has high radioactivity and a very small half-life (22 minutes). The isotopes of francium decay quickly to form astatine, radium, and radon.

Where is francium found?

A trace amount of francium isotopes is found in uranium minerals. In the earth’s crust, about 30 g of francium is found at any given time. The terrestrial abundance of metal is estimated at about 2 × 10−18 ppm.

It may be obtained by the neutron bombardment of radium in a nuclear reactor.

Francium has 34 known isotopes with atomic mass ranging from 199 to 232. Fr-223 and Fr-221 are the only naturally occurring isotopes of the alkali metal.

Francium on the periodic table

It is found in group 1 and period 7 of the periodic table. Francium is an alkali metal that lies along with Li, Na, K, Rb, and Cs. 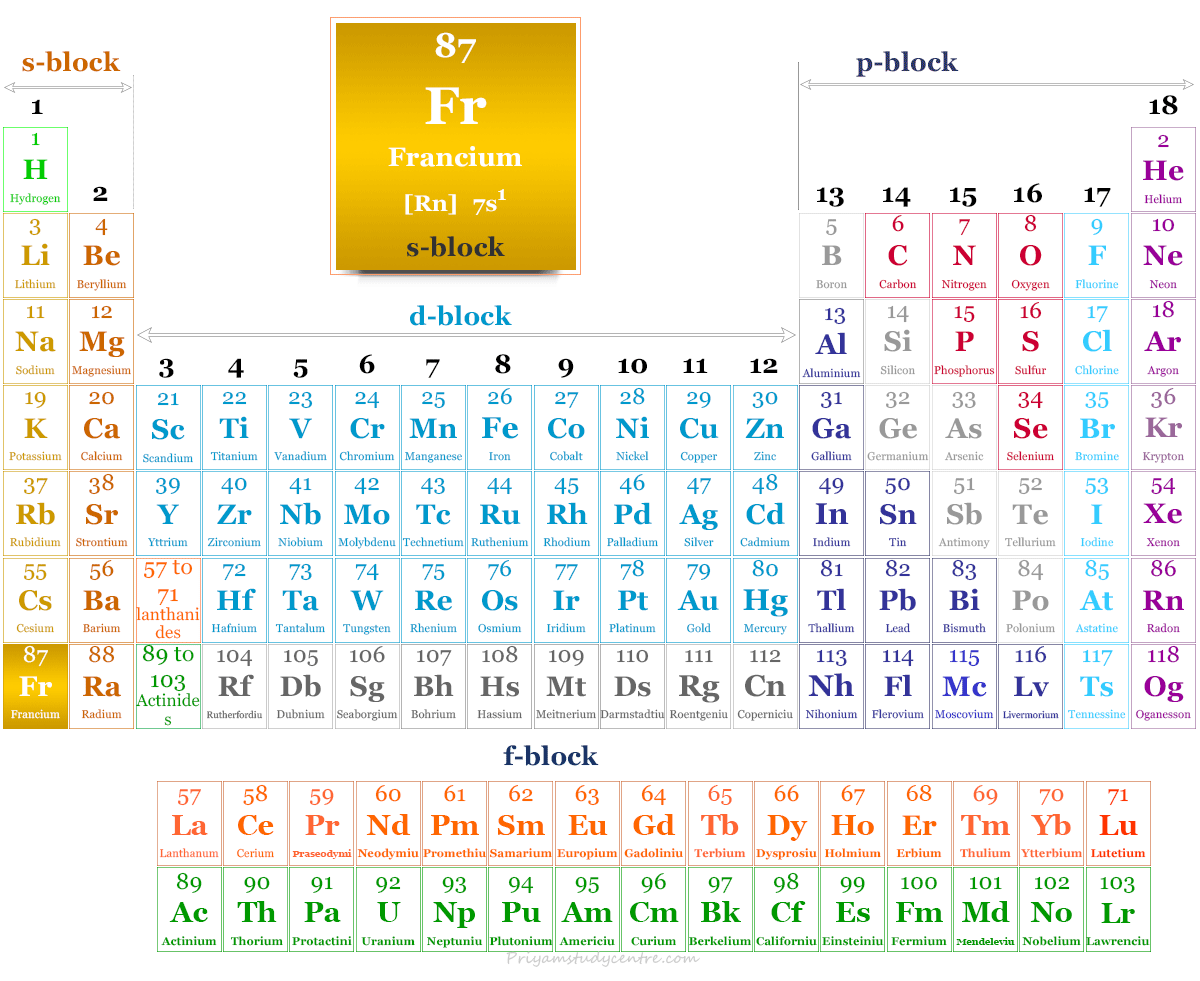 Francium is the most usable naturally occurring radioactive element with a very small half-life. The half-life of the longest live isotope is 22 minutes. It is considered to be the second rarest metal on the earth’s crust after astatine.

The valence shell electronic configuration suggests that the chemical and physical properties of francium are similar to alkali metal caesium.

It is very rare in our earth’s environment. It may not be found outside the laboratory. Therefore, naturally occurring chemical compounds of metal are rare in nature.

Francium is the most electropositive element in the periodic table. Coprecipitation studies revealed the similarities between Fr and Cs.

It is carried down completely on the crystals of Cs2PtCl6, Cs2SnCl6, and Cs2[Co(NO2)6] to form respective salts. It can be precipitated from hydrochloric acid solution by silicotungstic acid.

Francium can be produced by a nuclear fusion reaction. It can be synthesized in a linear accelerator by the bombardment of a beam of oxygen-18 atoms on a gold-197 target.

Depending on the energy of the oxygen beam, the nuclear reaction can produce francium isotopes like 209Fr, 210Fr, and 211Fr.

It is also obtained by the neutron bombardment of radium in a nuclear reactor. It may be made by bombarding thorium with protons.

Francium is a highly radioactive and rare metal. The half-life of the most stable isotope Fr-223 is only 22 minutes. Therefore, it cannot be used for any commercial purposes.

It may be used in the field of chemistry to generate information about atomic structure. The spectroscopic experiments with francium provide useful information about subatomic particles and the energy levels of an atom.

Facts about silver Silver is the shiny white, lustrous transition metal of Group 11 or IB in the periodic table with atomic number 47 and...