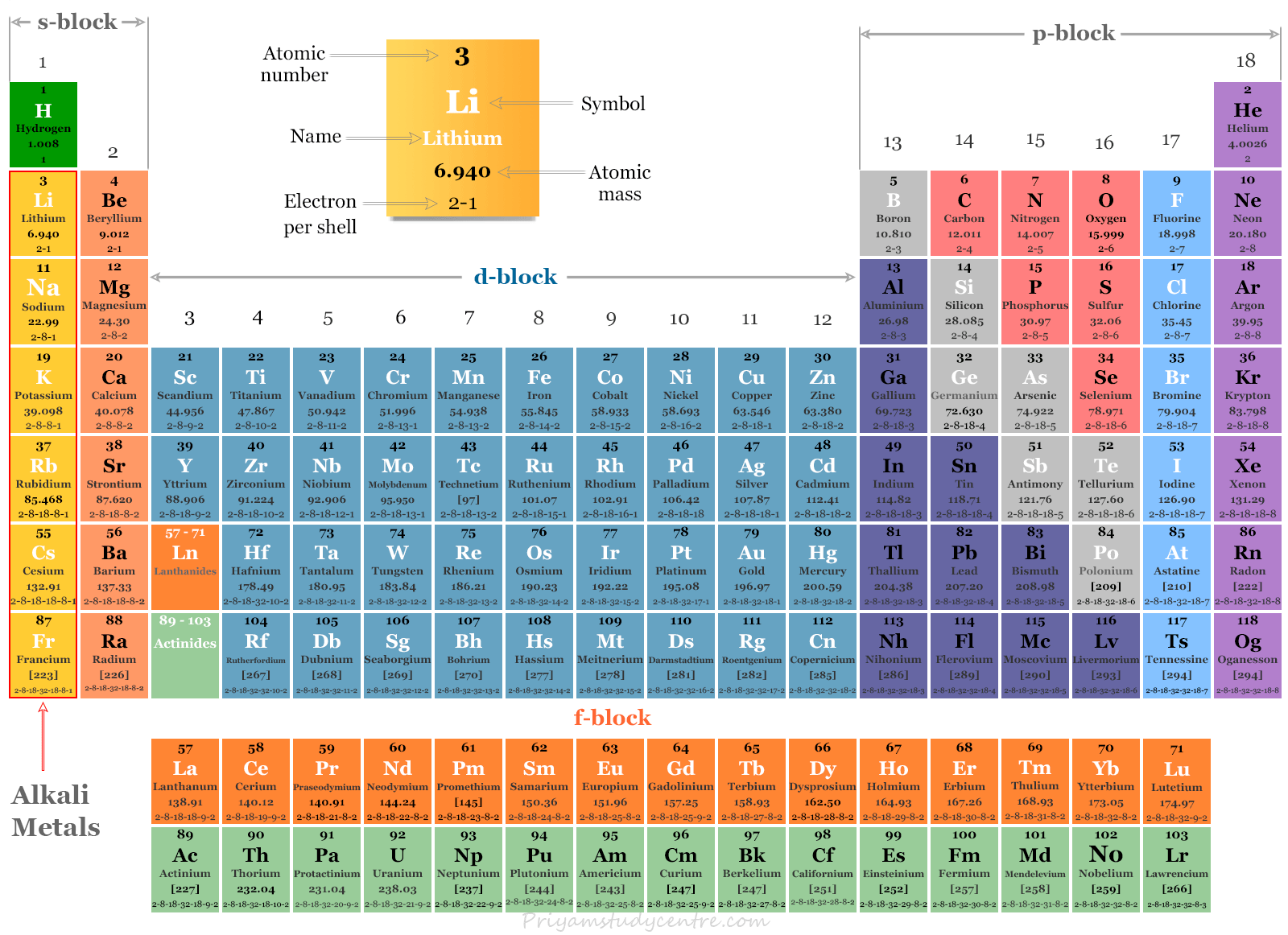 Alkali metal like sodium and potassium are extensively involved in our life process. Many of their compounds have been used since the early days of human civilization. The alkali metal, lithium, sodium, and potassium have wide industrial applications in the present-day world.

The alkali metals Na, K, and Rb are distributed very widely in the earth’s crust. With the increasing atomic number, the alkalis become rare. Lithium occurs in small amounts because it disappears through the natural process of nuclear reaction. Francium is very rare due to its high radioactivity.

The atomic and ionic radius of alkali metals is increasing systematically from lithium to caesium atom.

Alkali metals are soft, and low melting because only the outer ns electron participates in metallic bonding.

The observed densities of alkali metals increase down the group with the exception of potassium. Lithium, sodium, and potassium are only three metals that are lower denser than water.

All the elements in the alkali metals family have one electron in the s-orbital over a noble gas core. It is easily lost to give very low ionization energy. With the increasing atomic number, the distance between the nucleus and valence s-electron increases. It leads to a steady decrease in their ionization energy.

The alkali metal contains the largest size among the elements of each period. Large size and a small charge of cation favor the formation of ionic bonding. The tendency of forming ionic compounds increases down the group.

When the alkalis combine with other elements, there results in a wide difference in electronegativity. This fact leads to the formation of ionic compounds.

The alkali metal lithium may not follow the general trend of electrode potential. Lithium shows the most negative reduction potential.

The hydration energy of lithium is highest among the alkali metals due to its small size and it disrupts the structure of water molecules during electrode reactions. These two factors are quite significant to describe the reduction potential of lithium.

All the alkali metals give characteristic flame coloration due to easy excitation of outermost electrons.

It led to the development of analytical chemistry for precise estimation of these metals by flame photometry and atomic absorption spectroscopy.

The large difference between the first and second ionization energy of these elements suggests that the preferred oxidation state of alkali metals will be +1. Therefore, the major chemistry of alkali metal is in the form of M+ ions.

The chemical reactivity of the alkali metals increases from lithium to caesium. The poor reactivity of lithium explains by the fact that Li cannot replace the weekly acidic hydrogen from phenylacetylene.

The metals react with oxygen to form respective oxides, peroxides, superoxides, and suboxides.

Alkali metals dissolve in liquid ammonia to give blue solutions which contain free electrons. These solutions are used as a powerful reducing agent in various organic syntheses.

Question: Which alkali metal is most reactive?

Question: How many alkali metals are there in the periodic table?

Answer: There are six alkali metals present on the periodic table. The names of these metals are lithium (Li), sodium (Na), potassium (K), rubidium (Rb), caesium (Cs), and francium (Fr).

Answer: Lithium is the strongest reducing agent among alkalis due to its highest electrode potential value.

Question: Which alkali metal is radioactive?

Answer: Francium is very rare due to its extremely high radioactivity. Francium occurs in very small amounts in nature. The half-life of the longest live isotope is 22.8 minutes.

Question: Which alkali metal has the most metallic character?

Answer: With the increasing atomic number, the metallic character of alkali metals increases along the group. Therefore, francium is the most metallic element among alkalis.

But francium is rare in nature due to its high radioactivity. Hence the natural element that shows the highest metallic character is caesium.

Question: What alkali metal is used in fireworks?