Caesium or cesium is a chemical element or alkali metal of the periodic table with the symbol Cs and atomic number 55. It is a golden yellow, soft and low melting metal of group 1. 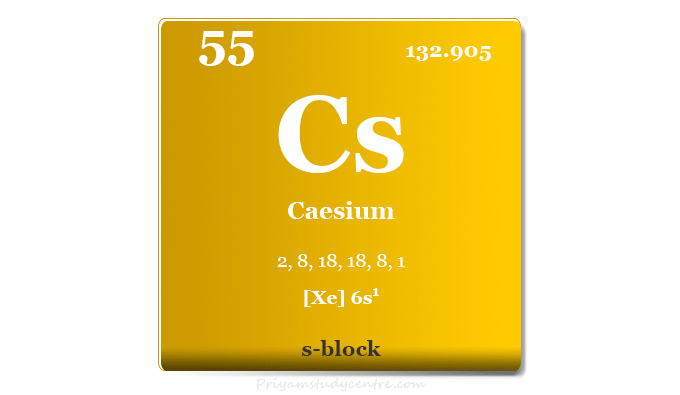 In 1860, caesium was discovered by German chemist Robert Bunsen and physicist Gustav Kirchhoff. It is discovered through flame spectroscopy analysis.

It has only one stable isotope, Cs-133. The other radioisotope Cs-137 is extracted from the waste obtained from nuclear power reactors.

Where is caesium found?

Caesium is a relatively rare element that occurs in Earth’s crust at an average of 3 ppm. It is the 45th most abundant element and the 36th among the metals present on the periodic table. It is more abundant elements than antimony, cadmium, tin, tungsten, mercury, and silver.

Caesium contains 40 known isotopes with mass numbers ranging from 112 to 151. The radioactive isotope 135Cs has a very long half-life of about 2.3 million years.

The radioactive isotope 135Cs is one of the long-lived nuclear fission products of uranium produced in nuclear power reactors. Almost all caesium isotopes produced from nuclear fission come from the beta decay reactions.

Caesium in the periodic table

Caesium is placed in group 1 and period 6 in the periodic table. It is an alkali metal that lies between rubidium and francium. 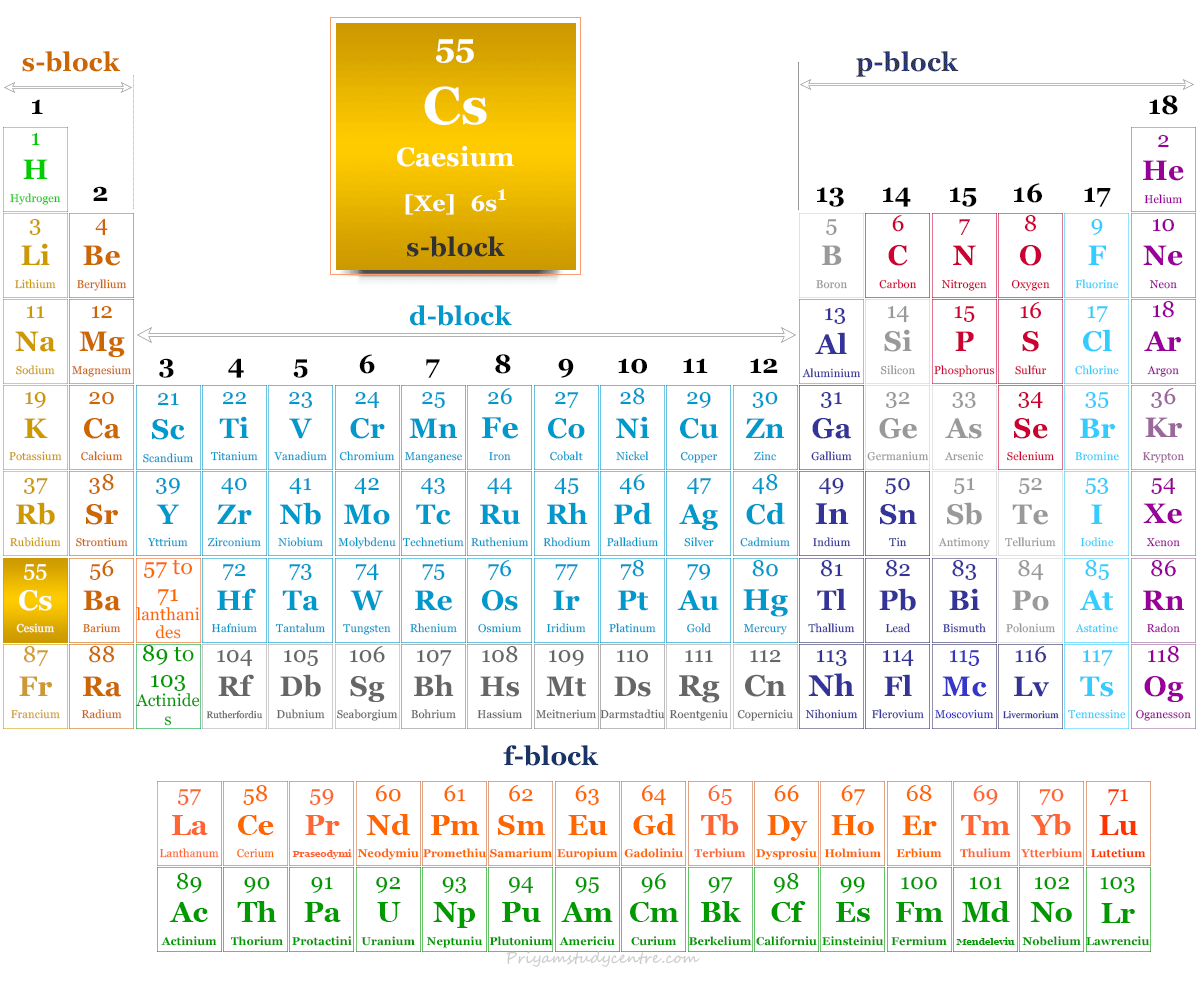 The electronic configuration of Cs is [Xe] 6s1. Like other alkali metals, only one electron participates in metallic bonds. It makes the metal soft and low melting. It is the second low-melting metal after mercury.

Caesium forms alloys with the other alkali metals, and transition metals gold, and mercury. At temperatures below 650 °C, it does not form alloys with cobalt, iron, molybdenum, nickel, platinum, tantalum, or tungsten.

Like other alkali metals, it gives characteristic flame coloration due to the easy excitation of 6s electron. Cs gives blue color on analysis by flame photometer or atomic absorption spectrophotometer.

Caesium metal is highly reactive and ignites spontaneously in the air. It reacts explosively with water or ice at low temperatures. It is classified as a hazardous material due to its high reactivity.

Caesium may be stored in saturated hydrocarbons like mineral oil and vacuum-sealed borosilicate glass ampoules. Due to its high reactivity, it can be handled only under inert gas or argon atmosphere.

The chemistry of caesium is similar to that of other alkali metals due to the presence of 6s electron. The large difference between first and second ionization energy suggests that the preferred oxidation number or state of Cs metal is +1. It is the most electropositive natural element found in the periodic table.

The major chemistry of caesium has in the form of a Cs+ ion. It binds a variety of anions to form various ionic compounds.

The phosphate, acetate, carbonate, halides, oxide, nitrate, and sulfate salts are soluble in water but double salts are less soluble. The fact is used for refining Cs metal from their ores. It forms poorly soluble double salt with antimony, bismuth, cadmium, copper, iron, and lead.

Like other metal cation, caesium act as a Lewis acid that produces complex compounds with Lewis bases. It adopts a coordination number greater than six due large sizes of Cs+ cation.

Like other alkali metals, caesium produces a series of binary oxides with oxygen atoms. Superoxide (CsO2) is the main product when burning with oxygen. It also forms caesium oxide (Cs2O) and peroxide (Cs2O2) when the desired condition is maintained.

Several brightly coloured suboxides have also been obtained. These may include,

Like sodium hydroxide or potassium hydroxide, caesium hydroxide (CsOH) is a strong base. It is extremely hygroscopic in nature due to the strong reactivity of the alkali metal Cs. Generally, it cannot be used in laboratories due to high reactivity and production cost.

Caesium fluoride (CsF) and caesium chloride (CsCl) are the most common halides of metal Cs. CsF is white solid and hygroscopic in nature. It is widely used as a source of fluoride anions in organofluorine chemistry. CsCl is a simple cubic crystal lattice.

A smaller scale of caesium and other alkali metals may be produced from ore pollucite. Primarily it can be extracted from pollucite by the acid digestion process. The silicate rock of pollucite can be dissolved with a strong acid like hydrochloric acid or sulfuric acid.

By dissolving hydrochloric acid, a mixture of soluble chlorides is produced. The insoluble double salts of Cs may be precipitated as Cs4SbCl7, Cs2ICl, and Cs2(CeCl6). After separation, the pure precipitated double salt is decomposed to give pure CsCl by evaporating with water.

By dissolving sulfuric acid, pollucite gives insoluble double salt or caesium alum, CsAl(SO4)2, 12H2O. The aluminium sulfate component from the alum is converted to the insoluble aluminium oxide by roasting with carbon. The resulting product is leached with water to produce a Cs2SO4 solution.

Most of the caesium salt can be converted directly to Cs formate for applications in oil drilling.

The metal may also be isolated by electrolysis of fused caesium cyanide under an inert atmosphere. Very pure and gas-free Cs can be produced by thermal decomposition of caesium azide CsN3 at 390 °C.

Pure caesium is a very costly alkali metal but the compounds are relatively cheaper.