Gold is a chemical element or yellow precious d-block metal of Group 11 or 1B of the periodic table with the symbol Au and atomic number 79. It is used widely from ancient history for jewelry or coinage making. The name gold is derived from the old English word geolu means yellow and from the Latin word aurum. 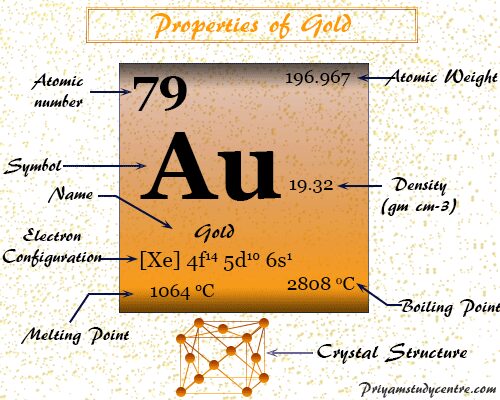 Copper, silver, and gold constitute the family of coinage or currency metals. These metals occur in nature in a native form with very similar chemical and physical properties in chemistry.

The purity of gold is expressed in carats, pure gold is 24 carats and the common alloyed with copper is 22 carats.

It is chemically unreactive, extremely malleable, ductile, high density (19.32 gm cm−3) golden-yellow metal. It is a good conductor of heat and electricity.

In learning chemistry, the characteristic golden yellow color arises from the absorption in the UV light from blue regions of the electromagnetic spectrum corresponding to the excitation of electrons from the filled d-band to the s-p conduction band.

The metal from the face-centered (fcc) crystal lattice in the solid form.

The 79 electrons of the Au atom are distributed in different orbitals to give the following electronic configuration given below the picture, 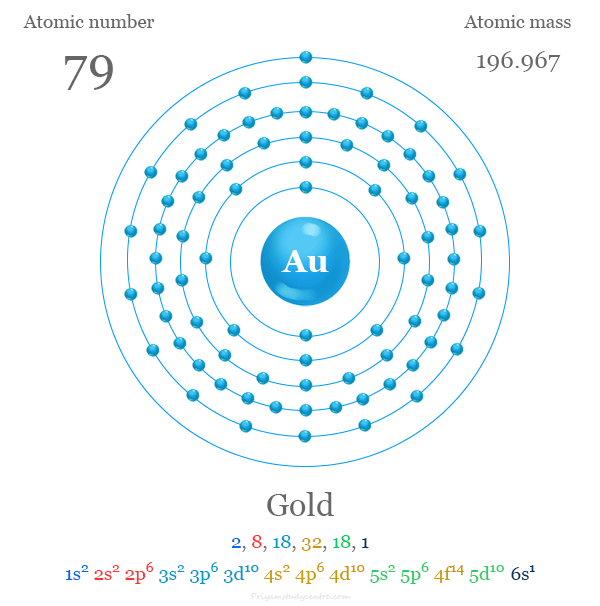 Gold on the periodic table

Gold is placed in group-11 on the periodic table with d-block or transition metal.

The valence shell electronic configuration of Au [Xe] 4f14 5d10 6s1 with filled d-orbital. It is placed with transition metal due to the presence of vacant d-orbital in +3 oxidation number or state. 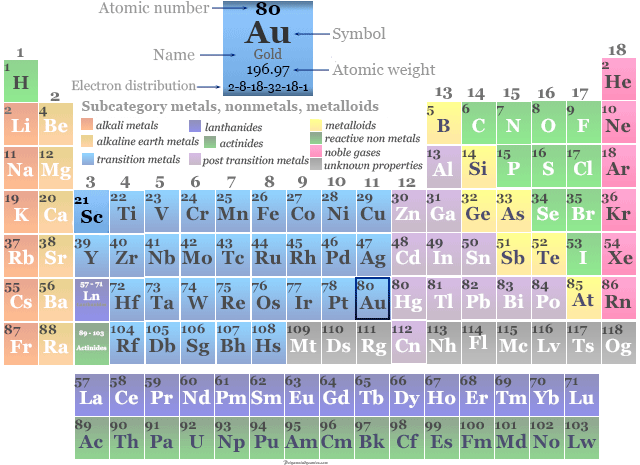 Where is gold found?

Native gold is found in nature in two forms,

The combined form of gold is found in a few minerals like calaverite, AuTe2, and sylvanite, (Ag, Au)Te2.

It is also found in sea water to the extent of 10−3 ppm but no extraction methods were developed to gain the metal from sea water.

The top 10 commercial gold producer countries in World according to the 2019 report given below table,

Gold is processed mainly by the cyanide and amalgamation process.

The cyanide process is going through the following steps,

The amalgamation process was also used to separate native gold from alluvial sand and gravel deposits. The finely crusted rocks amalgamated with mercury with the stream of water over copper plates. The amalgam is scary and mercury is distilled out in iron retorts.

The chemically unreactive gold is the noblest transition metal on the periodic table. It does not attract oxygen, sulfur, or readily react with halogens like fluorine, chlorine, bromine, and iodine molecule.

It will be dissolved in cyanide solution in presence of hydrogen peroxide or aqua regia (a mixture of concentrated nitric acid and hydrochloric acid).

Although the small size but no simple monovalent cation of gold can exist, most of the compounds are formed by covalent bonding or by the form of complexes.

The simple compound of gold (I) is restricted to chlorine, bromine, and iodine only. AuCl and AuBr are prepared by controlled thermal decomposition of respective halides.

The orange crystalline solid of Au (III) fluoride is made by the action of fluorine on Au2Cl6 at 300 °C.

AuF7 and AuF5 are examples of Au compounds that show a higher than +3 oxidation state formed by covalent chemical bonding.

The oxide, Au2O obtained by dehydrating AuOH with alkali metals and sulfur dioxide. Au (III) is the most common oxidation state of gold offering oxide like Au2O3.

Amorphous brown Au2O3, 2H2O is precipitated by alkali from the solution containing AuCl4−. The anhydrous oxide is obtained by drying the hydrated compounds over P4O10 followed by careful heating.

It is an olive green explosive powder obtained by careful digestion of Au2O3 or its hydrate with ammonia. The dry powder explodes with a flash on striking or heating. The probable formula of fulminating Au is HN=Au-NH2, 1.5 H2O.

+2 oxidation state is unfavorable in comparison to Au (I) and Au (II) and few complexes of Au( II) have been claimed.

Au2S3 is prepared by passing hydrogen sulfide over dry LiAuCl4, 2H2O at 10 °C. The lithium chloride is separated by extracting with alcohol and dried at 70 °C.

It is alloyed with other metals due to its increased softness and brightness for easy use for jewelry, gold ware, and coin making. The alloyed metals are silver, copper, zinc, platinum, and palladium.

The silver alloyed gold is used to make coins or gold ware and the platinum or palladium alloyed metal is commonly used for making craft jewelry.