Radon is a chemical element or noble gas or Group 18 element of the periodic table with symbol Rn and atomic number 86. It was discovered by Ernest Rutherford and Soddy in 1899 from the radioactive decay of substances. 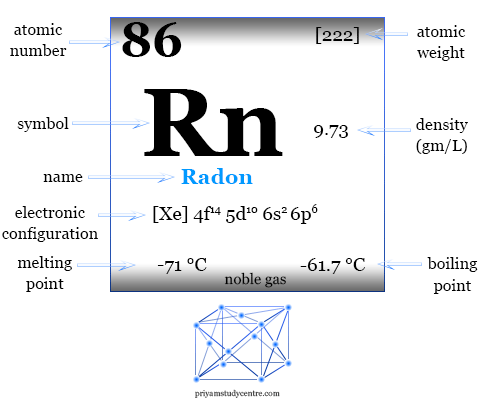 It is a colorless, odorless, tasteless, and heavy radioactive element obtained from radium-226 by alpha particle emission. Naturally, a small quantity of radon is formed during the radioactivity or chain reaction of uranium and thorium.

Where is radon found?

It is found in rock, soil, and natural gases. The burning of fossil fuels like coke or natural gas release radon gas.

Rn-222 is the longest-lived isotope of the element with a half-life of 3.8 days. It is a member of all three natural radioactive series.

Radon gas moves from different sources to air, groundwater, and surface water. It is coming to our homes through the water supply.

Radon on the periodic table

Prior to 1960 helium, neon, argon, krypton, xenon, and radon were known as inert or rare gases. Now it is called noble gas and placed on group-18 or group-0 of the periodic table. This gas was not known in Mendeleev’s time. 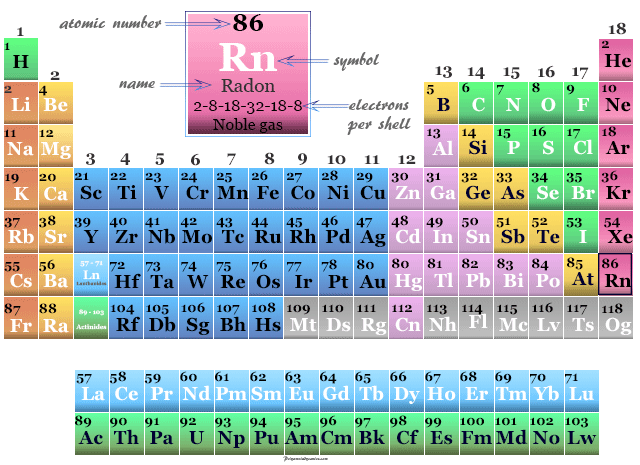 When it was discovered and characterized, due to extreme inertness, the gas is placed extremely right on the periodic table.

Radon-222 is the longest-lived radioactive isotope of the element having a half-life of 3.8 days. Due to the very short-lived, the study of the element is extremely difficult.

It has no stable isotopes but it formed thirty-nine radioactive isotopes with atomic mass ranging from 193 to 231.

It is colorless at ambient temperature but when cooled below its melting point, it emits brilliant yellow phosphorescence. The color changes to orange-red when cooled with liquid nitrogen.

At room temperature, the density and solubility of radon in water are the highest among all noble gases like He, Ne, Kr, and Xe.

Like other noble gases, it is also a member of zero valence elements which make it chemically inert. The ionization energy of radon is slightly lower than xenon. The fact suggests that Rn is more reactive than Xe.

Due to the small half-life, the study of the chemical properties of radon is very difficult. It is naturally used as a natural tracer for chemical analysis. It is volatile above −80 °C but the compounds are not volatile at the same condition.

The gas is largely diluted by ozone, hydrogen, and oxygen produced from the alpha-irradiation of water. The mixture of gases passed over heated copper and copper (II) oxide and finally dried with phosphorus pentoxide to obtain pure radon.

Inspired by the development of xenon chemistry, it is logical to form rich chemistry of radon from energy consideration. But due to the very short life and small availability of the element in the earth’s atmosphere, making its study is very difficult in science.

One g of Ra-226 produces only 1g of Ra. Therefore, the study of the element is restricted to tracer studies.

Radon reacts with fluorine gas at room temperature or liquid fluorine at −196 °C, the reaction vessel retains some gamma-activity after the volatile substance is pumped out.

It suggests that an ionic chemical bond might be formed in ionic fluoride like Rn+F− or (RnF+)F−. The fluorine molecule is reduced by hydrogen gas at 500 °C to set free the element from the fluoride compound. It is also oxidized by several interhalogen cations to give Rn+ or RnF+ which may be retained by ion exchange resin.

It causes lung cancer by breathing. According to the United State Environmental pollution agency, it is the second material that caused lung cancer after cigarette smoking.