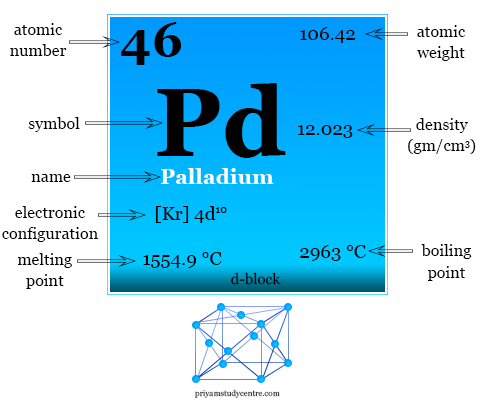 Chemically, Palladium metal is inert to attack by mineral acids and air or water under ordinary conditions. Almost all compounds decompose to yield Pd when heated. All these elements are rare in the earth’s crust. The element palladium is found together with other noble metals like copper, silver, and gold.

Palladium is the second platinum metal discovered in 1803 by English chemist W Wollaston. It was isolated and identified during the investigation of crude platinum. He called the metal after the asteroid Pallas discover a year earlier. He named it after the Greek goddess of wisdom.

It has the remarkable properties of absorbing molecular hydrogen in large volumes. Electronic configuration and some physical and chemical properties of palladium are given below the table,

From group-10 elements like Ni, Pd, and Pd, the ionization energy increases with the increasing atomic number. Due to lanthanide construction, the atomic radius of Pd and Pt are the same.

The 46 electrons of the Pd atom are distributed in different energy levels to show the following electronic configuration given below the picture, 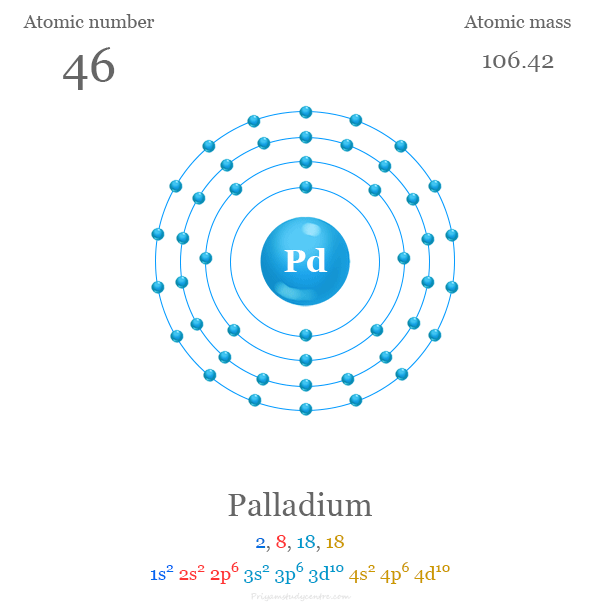 Palladium in the periodic table 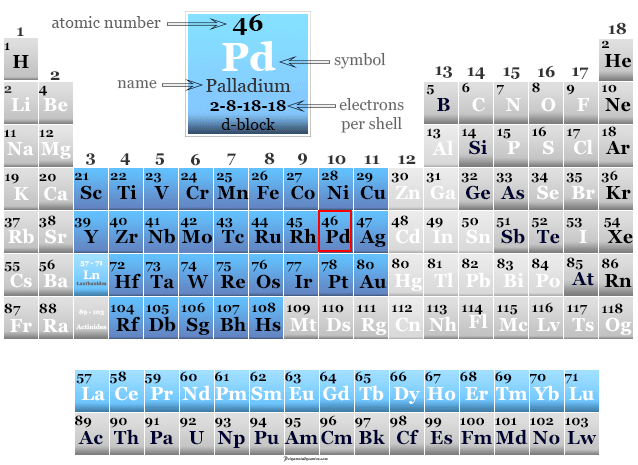 Palladium is placed in group-10 and period-5 of the periodic table with d-block elements or transition metals. The valence shell electronic configuration of platinum is [Kr] 4d10. It has many similarities with group member platinum. +2 and +4 oxidation number or state is the most common for both metals.

Where is palladium found?

Separation and isolation of individual platinum metals are based on their properties towards acids or the differences in solubility of their complexes.

+4 and +2 oxidation states are the most common oxidation states for the element palladium. The highest oxidation state of Pd element is +4. PdF4 is the only tetrahalide in the +4 state. Fluorination of K2[PdCl4] gives K2PdF6. The anion PdF6−2 is thermodynamically unstable to hydrolysis.

It forms numerous complexes which are diamagnetic and mostly are square planners. Some common chemical compounds of palladium in different oxidation states are discussed below,

A black colour oxide (PdO) is prepared by heating palladium in oxygen. PdO dissociates above 875 °C and is insoluble in all acids.

A gelatinous dark yellow precipitate of the hydrous oxide PdO, xH2O may be obtained by adding alkali in aqueous Pd(NO3)2. It is soluble in acids but can not be completely dehydrated.