Promethium is a chemical element or rare earth metal in the periodic table with the symbol Pm and atomic number 61. It is a radioactive lanthanide or f-block element that is extremely rare in Earth’s crust. All the isotopes of promethium are radioactive and found naturally by the spontaneous fission of uranium-238. 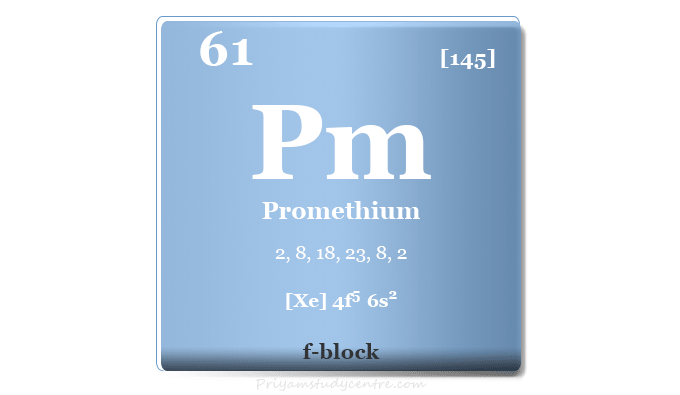 It is used mainly for research purposes due to the very small abundance of rare earth metal promethium. The only isotope Pm-147 is used in luminous paint, atomic batteries, and thickness-measurement devices.

Promethium is the only element in the lanthanide series of the periodic table that has no stable isotopes. A very trace amount of promethium is found in the earth’s crust. It is also identified in the spectrum of the star HR465 in Andromeda.

In 1945, USA chemists Jacob Marinsky, Lawrence Glendenin, and Charles Coryell isolated the radioactive isotopes 147Pm and 149Pm from uranium fission products at Clinton Laboratories. The name promethium was proposed by discoverers from the word Prometheus. In Greek mythology, Prometheus means stealing fire from the Gods and giving it to humans.

Where is promethium found?

It is the only element in the lanthanide series of the periodic table that has no stable isotopes. Only a trace amount of promethium is found in the Earth’s crust in some uranium ores. In addition to uranium ores, the Pm spectrum may also be found in the Andromeda galaxy.

It is formed in nature as a product of spontaneous radioactive decay of uranium-238. It is extremely rare and only about 500–600 grams of naturally occurring Pm metal is found in Earth’s crust at any given time. The isotope promethium-147 is also formed by alpha decays of natural europium-151. 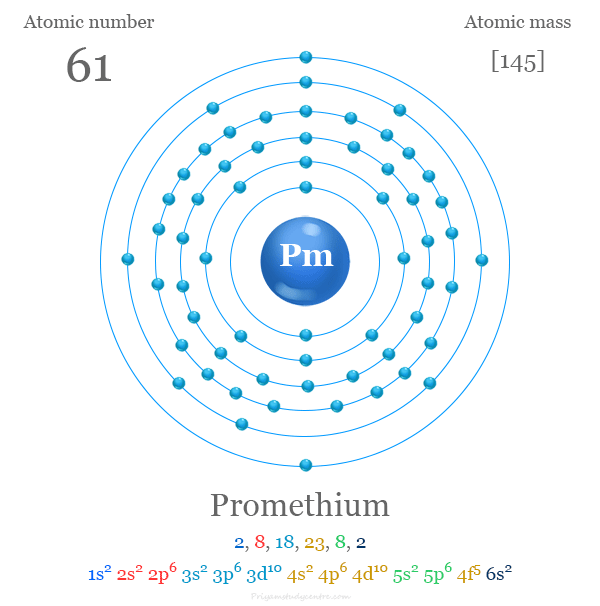 The 61 electrons of promethium are arranged to show the electron configuration of [Xe] 4f5 6s2. Like other lanthanides, Pm uses three valence electrons to show a +3 oxidation number or state. The reaming 4f electrons are strongly bound due to the higher stabilization of 4f electrons in comparison to 5d or 6s electrons.

Promethium in the periodic table

The radioactive element promethium is placed with lanthanide or rare earth metal in the periodic table. It is an f-block element that lies between neodymium and samarium. 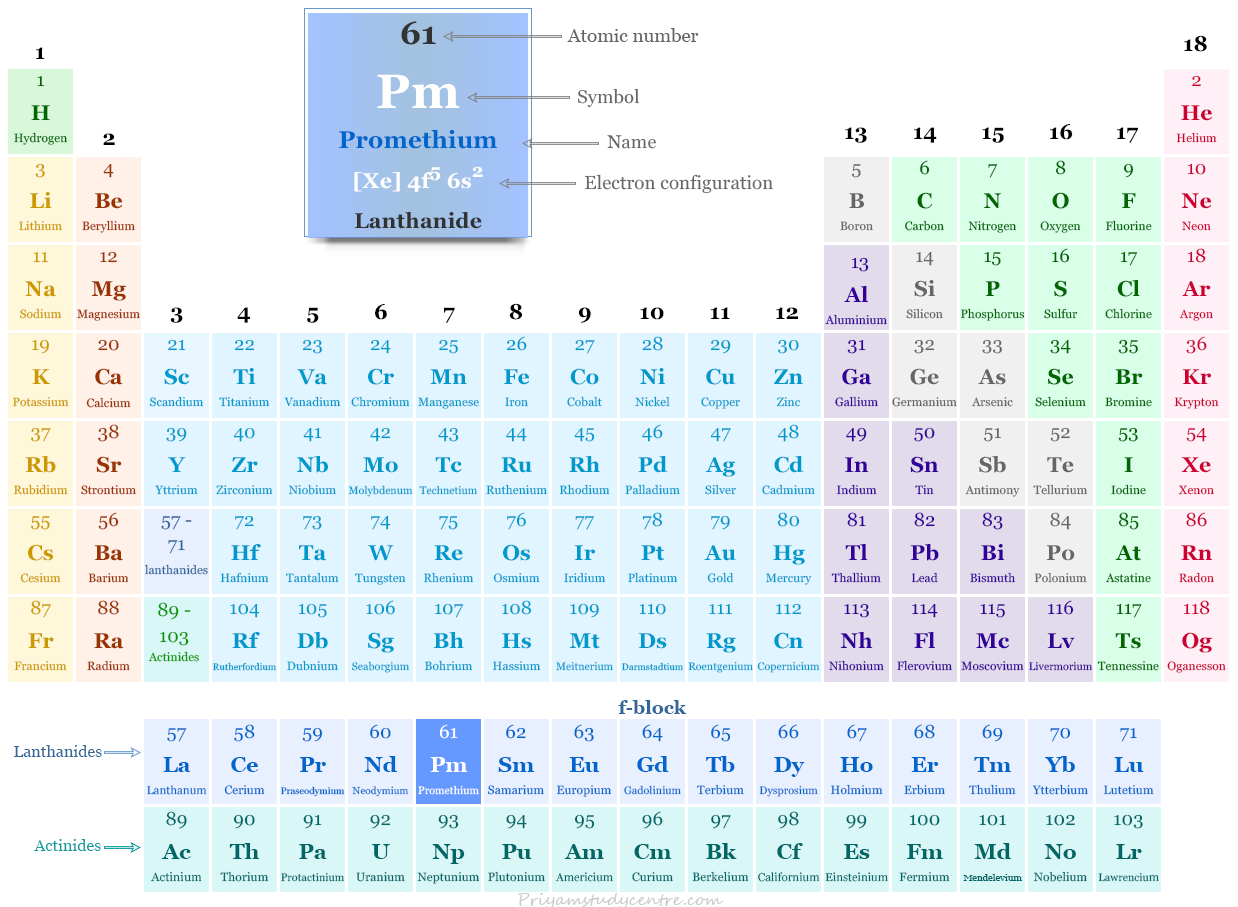 The chemical studies of promethium are incomplete due to its instability. The electron configuration for Pm3+ is [Xe] 4f4 and the color of the ionic solution is pink.

Only a few compounds of Pm are synthesized but they are not fully studied. The main Pm3+ compounds may include,

Acidic solutions containing Pm3+ ions react with ammonia to form a gelatinous light-brown hydroxide, Pm(OH)3. It is insoluble in water.

Pm+3 is dissolved in hydrochloric acid to form a water-soluble yellow salt, PmCl3. Similarly, when dissolved in nitric acid, it forms promethium nitrate with the chemical formula Pm(NO3)3.

Promethium is the only lanthanide that has no stable or long-lived isotopes. The longest-lived isotope is promethium-145 with a half-life of 17.7 years. The primary decay products or Pm isotopes are neodymium and samarium isotopes.

Promethium-147 (half-life of 2.68 years) is the most common and useful isotope of lanthanide Pm. It is a beta-particle-emitting isotope. It can be separated from other rare earth fusion products by ion exchange chromatography.

It is a very rare element. Therefore, promethium is used only for research purposes. Only the isotope, promethium-147 is used outside the laboratories. Neodymium-146 has been used for the production of 147Pm.