Neodymium is a chemical element or rare earth metal in the periodic table with the symbol Nd and atomic number 60. It is a hard, silvery, slightly malleable f-block element that is the fourth member of the lanthanide series. 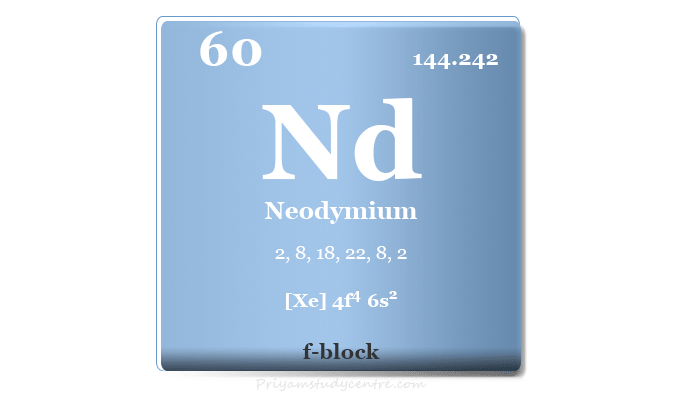 It is an important component of neodymium magnets that are obtained by alloying with iron and boron. The strong permanent magnets of rare earth metal neodymium are used widely in many electronic devices such as mobile phones, microphones, loudspeakers, electronic musical instruments, and wind turbines.

The rare earth metals praseodymium and neodymium were discovered in 1885 by the Austrian chemist Carl Auer von Welsbach. The name neodymium is obtained from the Greek words neos means new and didymos means twin. Commercially, neodymium compounds were used first for glass coloration.

Where is neodymium found?

It is the second most abundant of the rare-earth metals after lanthanum and cerium. It is almost the same abundant as that copper. Neodymium is found commercially in two main ores such as monazite and bastnasite.

Neodymium in the periodic table

It is placed with lanthanides or f-block elements in the periodic table. Neodymium is a rare earth metal that lies between praseodymium and promethium. 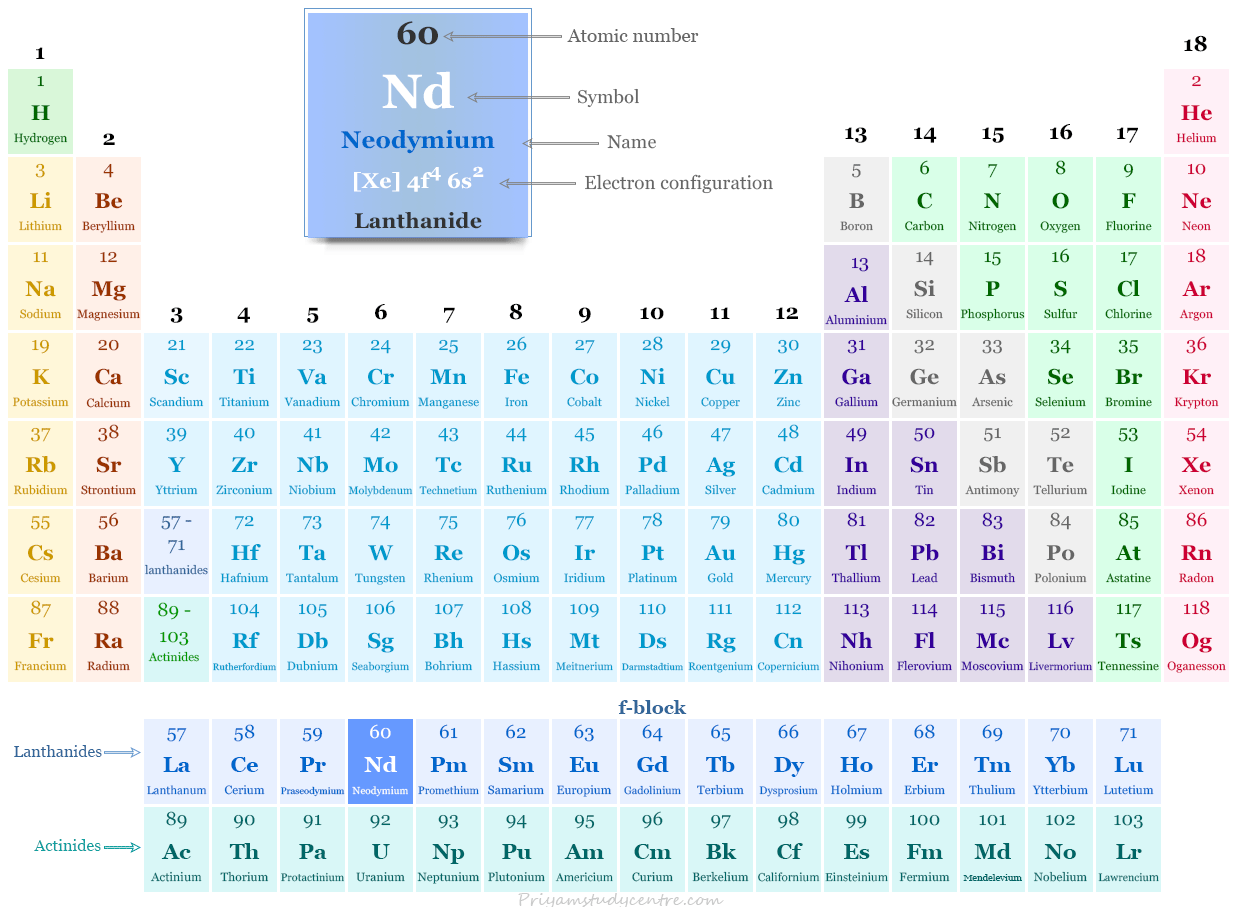 It is the fourth member of the lanthanide series that form a bright, silvery metallic luster. It is an active metal that is highly malleable and ductile. Neodymium is alloyed with other metals like iron and boron to make stable and powerful magnets that are used in various commercial equipment. 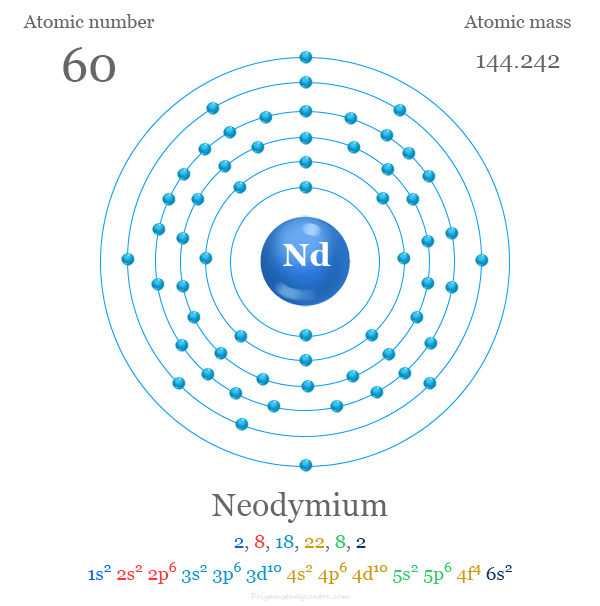 The 60 electrons of neodymium are arranged to show the electron configuration of [Xe] 4f4 6s2. Like other lanthanides, Nd commonly uses three valence electrons to show a +3 oxidation number or state. The reaming 4f electrons are strongly bound due to the greater stabilization of 4f orbitals in comparison to 5d or 6s.

Neodymium is a highly electropositive and active metal. The electrode potential value of Nd is comparable to that of alkaline earth metals. Nd acts as a strong reducing agent.

The compact metal is quite stable to dry air at ordinary temperatures but rapidly dull in a humid atmosphere. Neodymium metal tarnishes slowly in the air by the formation of an oxide layer. Like praseodymium, it also burns in oxygen at 150 °C to form Nd (III) oxide.
4 Nd + 3 O2 → 2 Nd2O3

Neodymium metal reacts with all the halogens like chlorine, fluorine, bromine, or iodine to form trihalides.

Neodymium carbonate is a chemical compound with the chemical formula Nd2(CO3)2. It may be prepared by passing carbon dioxide in an aqueous solution of Nd(OH)3.

The carbonate is insoluble in water but dissolves in acids with the liberation of carbon dioxide.

It forms multiple hydrates like octa-, penta-, and dihydrate but the octahydrate form is the most common. It is used in glass for making extremely powerful lasers.

Neodymium acetate is a salt that contains one Nd+3 ion and three acetate anions with the chemical formula of Nd(CH3COO)3. Nd acetate is a purple solid that is soluble in water.

It may be used for making ultra-high purity compounds, catalysts, and nanoscale materials. Neodymium acetate is a substitute for uranyl acetate in electron microscopy. It may also be used in glass, crystal, capacitors, and lenses for welding goggles.

A neodymium magnet is the most widely used commercial magnet of rare earth metals. It is a permanent magnet that is made from an alloy of neodymium, iron, and boron to form a tetragonal crystalline solid with the chemical formula Nd2Fe14B.

Commercially, pure neodymium was used first in glass coloration. The color of the glasses changes under different lighting conditions. It shows reddish-purple under daylight or yellow incandescent light but blue under white fluorescent lighting or greenish under trichromatic lighting.

Neodymium glass is obtained by mixing neodymium oxide (Nd2O3) in the glass melt. The red color of glasses may be produced by combing gold or selenium. The most common use of these glasses may include,

They are liquid lasers obtained from certain transparent materials with a small concentration of neodymium ions. These layers are very powerful and offer many technical advantages.

In agriculture, lanthanide compounds such as Pr and Nd compounds are used as insecto fungicides and trace elements in fertilizers. They are frequently used for making fertilizers in china.

Uranyl acetate is a radioactive and toxic substance that has been used as a standard contrasting agent in transmission electron microscopy (TEM) for decades. It causes various health hazards or radioactive pollution.

Presently, neodymium acetate or platinum blue may be used as a standard contrasting agent instead of uranyl acetate in transmission electron microscopy.

Neodymium is the second most abundant rare earth metal after lanthanum and cerium. The metal Nd is used widely for making magnets and coloration of glasses.