Thulium is a chemical element or rare earth metal in the periodic table with the symbol Tm and atomic number 69. It is a second rarer lanthanide after radioactively unstable samarium. Like other lanthanides, thulium most commonly shows a +3 oxidation number or state but the +2 oxidation state of the metal is also stable. 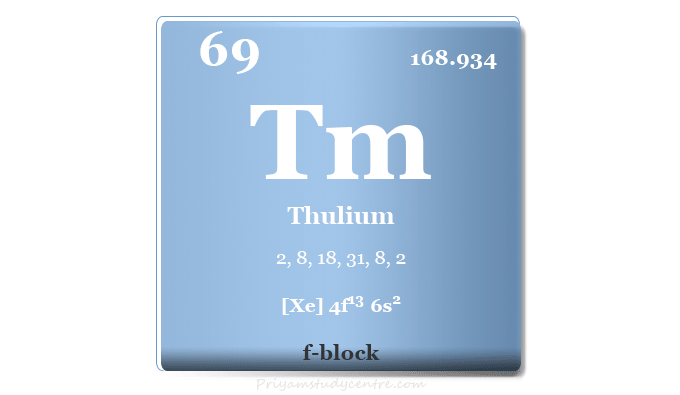 Thulium is rarely used in x-ray devices and solid-state lasers due to its high price. Like scandium, it is used in arc lighting for the production of green emission spectra. Recent reports show that thulium optical fiber laser provides an impressive level of performance in laser lithotripsy.

Thulium metal was discovered in 1879 by Swedish chemist Per Teodor Cleve from the mineral erbia which is a source of other rare earth element holmium. It was named from the word Thule, the ancient name for Scandinavia.

Where is thulium found?

A pure form of thulium is never found in nature but it is found in small quantities with other rare earth minerals such as monazite and bastnasite. It is the second rarest lanthanide after samarium. The chief ores of the metal are mined in the region of China, US, Brazil, India, Sri Lanka, and Australia.

Like other rare earth metals, it can be extracted or separated by ion exchange chromatography and solvent extraction process. The metal is also produced by reducing the anhydrous fluoride with calcium or reducing thulium oxide with lanthanum.

The majority of these isotopes have half-lives shorter than a minute. The primary radioactive decay mode of Tm isotopes is electron capture or beta decay.

Thulium is a silvery metal that is fairly stable in the air and reacts slowly in water but more quickly in acids. It is a soft metal that can be easily cut with a knife.

Thulium in the periodic table

The rare earth metal thulium is placed in the f-block of the periodic table. It is a lanthanide that lies between erbium and ytterbium. 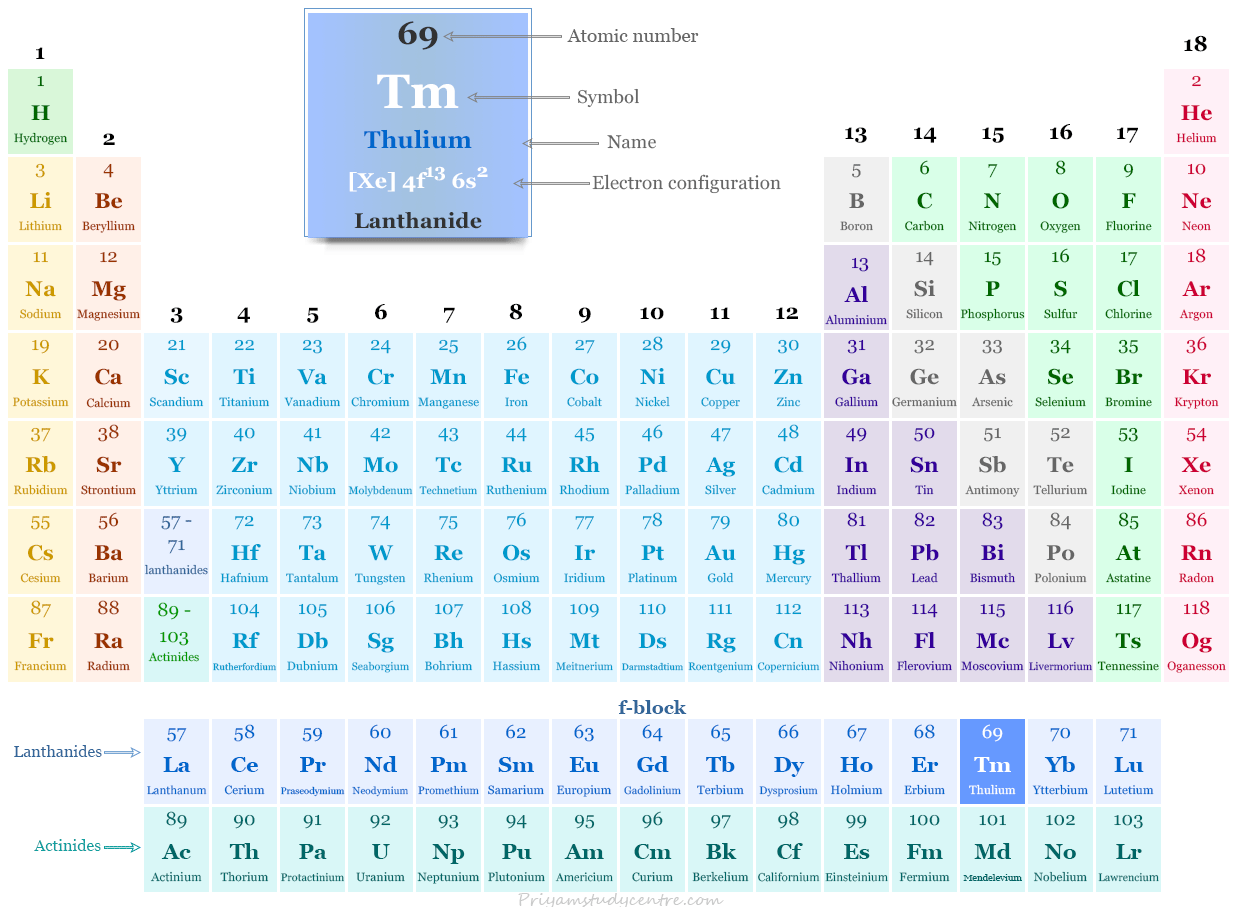 The 69 electrons in thulium are distributed in different energy levels or orbitals to show the following electron configuration given below the picture, 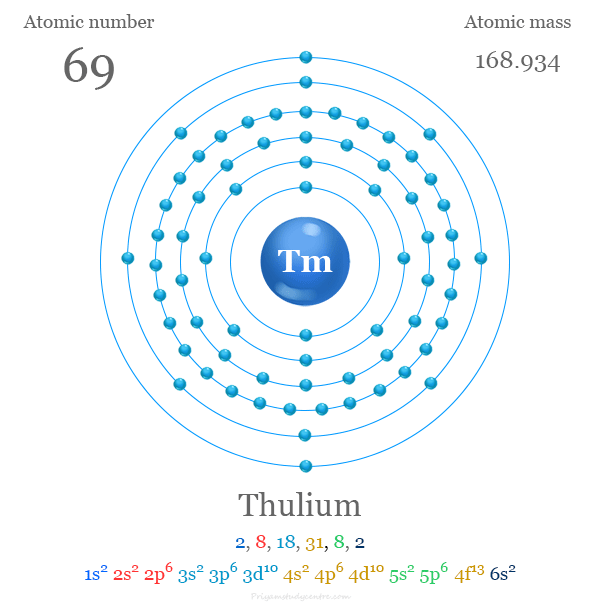 Like other lanthanides, the most common oxidation number or state of thulium is +3 and it exists as a Tm3+ ion in solution. It reacts with various metallic and non-metallic elements forming a range of binary compounds.

Thulium stands far above hydrogen in the electrochemical series. Therefore, it reacts slowly with cold water and rapidly with hot water by the liberation of hydrogen and the formation of Tm (III) hydroxide.
2 Tm + 6 H2O → 2 Tm(OH)3 + 3 H2

The hydroxide is precipitated as a gelatinous precipitate from an aqueous solution by the addition of ammonia or dilutes alkali to form soluble salt of Tm+3 ion.

It is attacked by mineral acids like sulfuric acid, nitric acid, and hydrochloric acid with the liberation of hydrogen gas. In presence of dilute sulfuric acid, thulium forms a solution that contains the pale green Tm (III) ions.
2 Tm + 3 H2SO4 → 2 Tm3+ + 3 SO4−2 + 3 H2

Facts about hafnium Hafnium is a chemical element or silvery-white transition metal of Group 4 (IVB) of the periodic table with the symbol Hf and atomic...