Cerium is a chemical element or rare earth metal in the periodic table with the symbol Ce and atomic number 58. It is a soft, ductile, and silvery-white metal that lies with f-block elements or lanthanides. 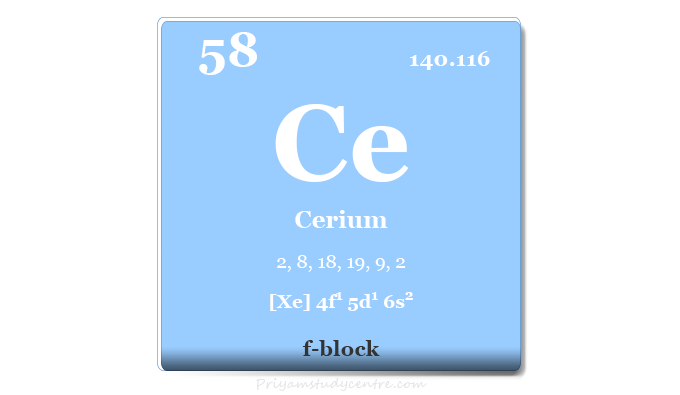 Cerium is the most abundant lanthanide that makes up 66 ppm of the Earth’s crust. The value is just behind that of copper (68 ppm). It is more abundant than some metals like lead and tin.

Cerium and its compounds may be used to polish glasses, catalytic converters, ferrocerium lighters, and light-emitting diodes to produce white light for commercial LED light.

In 1803, the lanthanide cerium was discovered by Swedish chemists Jöns Jakob Berzelius and Wilhelm Hisinger and independently by German chemist Martin Heinrich Klaproth in the same year. It is isolated first in 1839 by Carl Gustaf Mosander. It is named after the asteroid Ceres or named after the Roman goddess of agriculture.

Where is cerium found?

Cerium is one of the most abundant of the rare-earth metals among all the lanthanides. It is found in several minerals such as allanite or orthrite, monazite, bastnasite, cerite and samarskite. Cerium is a class of rare earth metals but the abundance of Ce in Earth’s crust is not rare.

India, Brazil, and Southern California are the largest depositor and producers of rare earth metal cerium.

There are 35 radioactive isotopes with mass numbers ranging from 119 to 157. These isotopes are synthetic and obtained by various nuclear reactions. Many of these isotopes are occurs in the nuclear fission process of uranium.

Cerium is silvery white, soft, and malleable metal with high electrical conductance. The appearance of Ce is similar to that of silver metal. 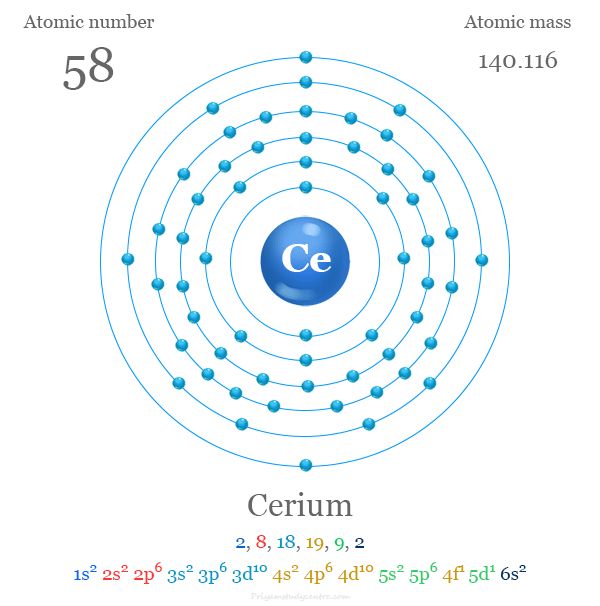 The 4f, 5d and 6s energy levels are very close to each other. Therefore, the transfer of one electron to the 5d shell is occurring due to strong interelectronic repulsion in the compact 4f shell.

The principal oxidation state of all lanthanides is +3. The element adjacent to lanthanum (4f0), gadolinium (4f7), and lutetium (4f14) are shows other oxidation states.

Cerium has four outer electrons or valence electrons in 4f, 5d, and 6s energy levels. After losing these four electrons, it forms a Ce+4 ion. The Ce+4 ion is stabilized by an empty f-shell configuration.

Cerium in the periodic table

It is placed in the f-block of the periodic table. Cerium lies between lanthanum and praseodymium in the lanthanides series. 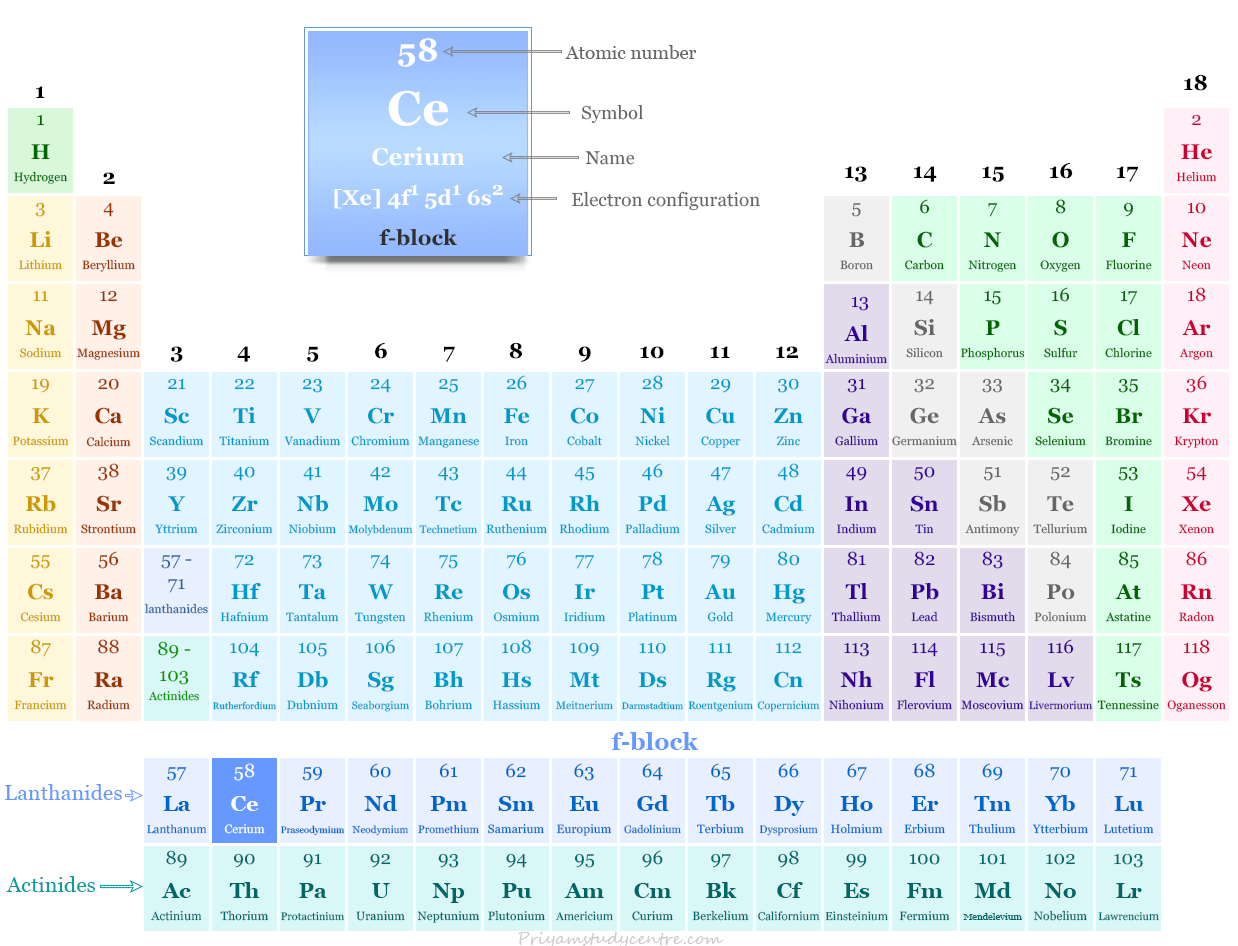 It reacts with hydrogen to form stable CeH2 and CeH3. The hydrides of cerium are non-stoichiometric in nature.

Cerium is a highly electropositive rare earth metal. Therefore, it reacts with water to form Ce (III) hydroxide and hydrogen gas. The rate of production increases with increasing temperature.

The rare earth metal cerium shows +3 and +4 oxidation states. The details about oxide, fluoride, and sulfate compounds of cerium are given below the topics,

Cerium (IV) oxide or ceria is a pale yellow-white powder with the chemical formula CeO2. It is an important commercial substance and an intermediate that uses widely for the production of other elements from their ores.

The fluoride compounds of cerium are obtained in +3 and +4 oxidation states. Ce (III) fluoride is an ionic compound of rare earth metal cerium and fluorine. Ce (IV) fluoride is a strong oxidant that forms a white crystalline solid.

Cerium (IV) sulfate is a strong oxidizer with the chemical formula Ce(SO4)2. It is obtained in anhydrous and various hydrated forms.

The elemental chlorine is formed when ceric sulfate is added to dilute hydrochloric acid. In analytical chemistry, cerium (IV) sulfate is used as an oxidant in titrations in place of permanganate or dichromate. In acetic acid solution, it oxidizes aldehydes and ketones at the α-carbon atom.

What is molybdenum? Molybdenum is a chemical element or strong and silvery transition metal of Group 6 (VIB) of the periodic table with the symbol Mo...