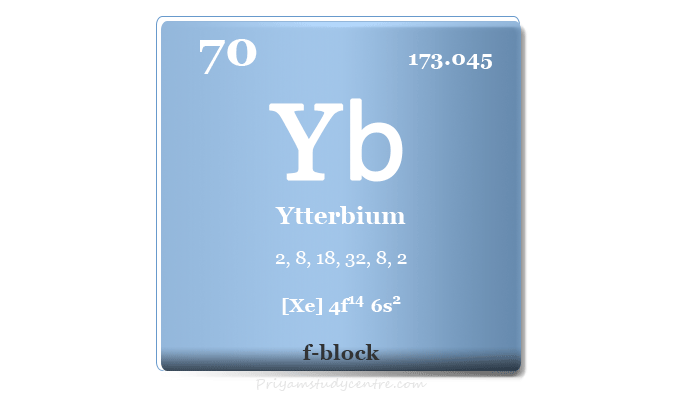 It is a useful component for making the world’s most stable atomic clock. Much progress has been observed in optical fibers technology after using ytterbium-doped optical lasers.

Ytterbium was discovered in 1879 by the Swiss chemist Jean Charles Galissard de Marignac while examining samples of gadolinite. He found a new component from gadolinite known as erbia. He named it ytterbia for Ytterby means the Swedish village near where the new component of erbium was found.

Where is ytterbium found?

Ytterbium is the 44th most abundant element in the Earth’s crust and one of the more common rare earth metals found with other rare-earth minerals.

The most common and commercially important mineral of the metal is monazite. The element is also found in the minerals euxenite and xenotime.

The main mining region of ytterbium metal is China, the United States, Brazil, India, Sri Lanka, and Australia. It can be extracted and separated from other rare earth minerals by ion exchange chromatography and solvent extraction process.

Naturally occurring ytterbium is a mixture of seven stable isotopes with atomic mass ranging from 168 to 176. The most common isotope is ytterbium-174 which occurs in about 31.8 percent of the natural abundance. At least 27 radioactive isotopes have been obtained by various nuclear reactions.

Most of these radioactive isotopes have half-lives of less than 20 minutes. The primary radioactive decay mode of ytterbium isotopes is electron capture or beta decay. It also displays 12 meta-stable isotopes with the most stable being ytterbium-169m.

Soft, silvery ytterbium oxidizes slowly in the air by the formation of a protective surface layer. The finely divided ytterbium powdered will ignite in the air.

Ytterbium in the periodic table

The rare earth metal ytterbium is placed with f-block elements in the periodic table. It is a lanthanide that lies between thulium and lutetium. 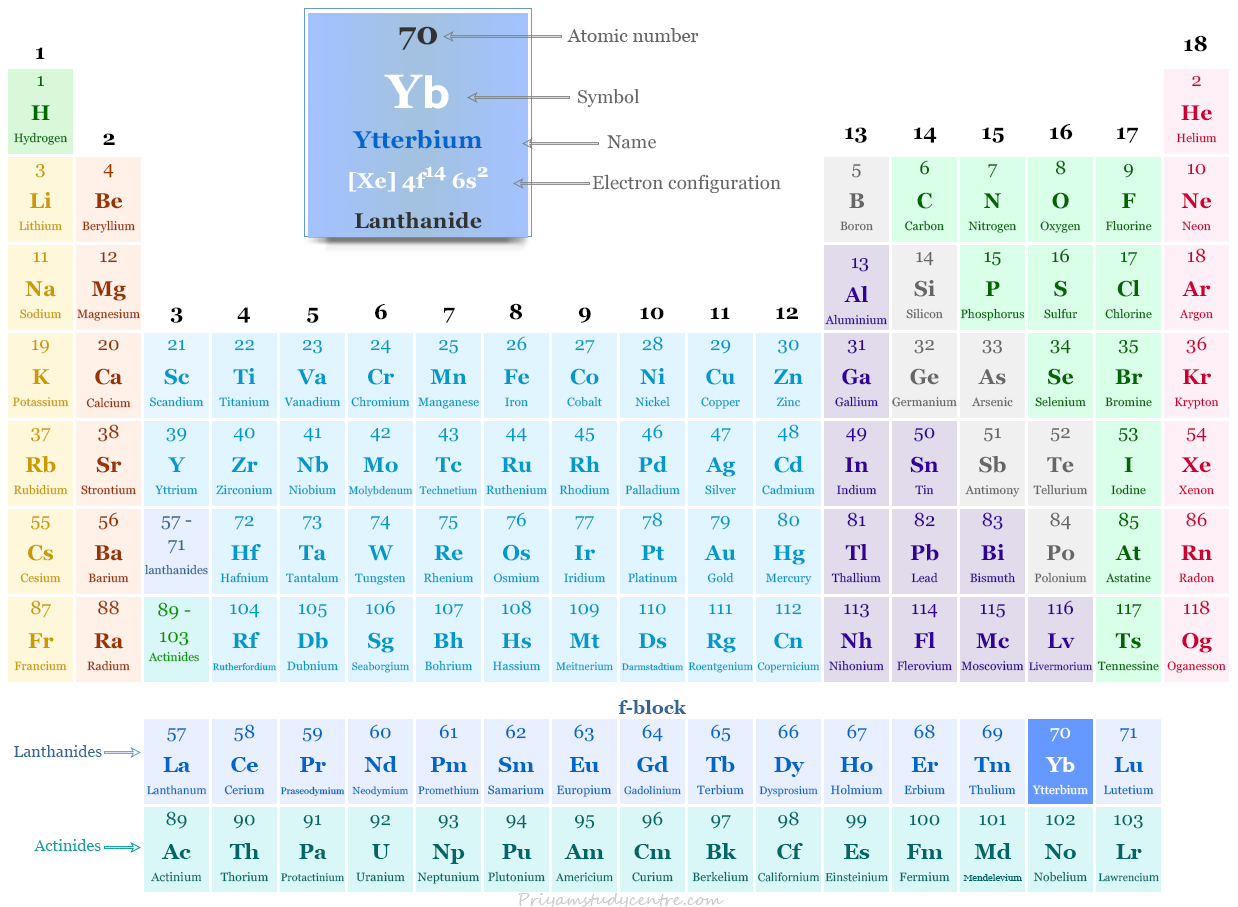 The 70 electrons of the ytterbium atom are distributed in different energy levels to show the following electronic configuration, 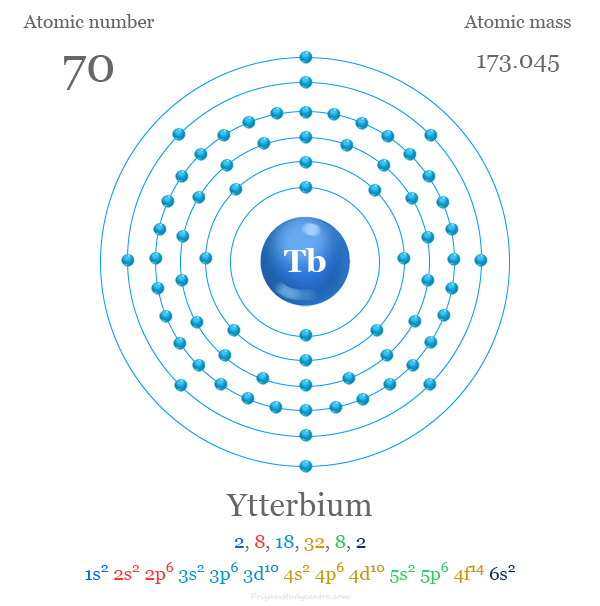 Like other lanthanides, the most common oxidation number or state of ytterbium is +3 but the +2 oxidation state is also stable due to the f14 configuration of the Yb+2 ion. It reacts with hydrogen to form various non-stoichiometric hydride compounds.

Ytterbium is a highly reactive and electropositive rare earth metal that is stable in dry air at ordinary temperatures but rapidly dull in humid atmospheres. It readily reacts with oxygen to form Yb (III) oxide Yb2O3.
4 Yb + 3 O2 → 2 Yb2O3

Ytterbium stands far above hydrogen in the electrochemical series. Therefore, it reacts slowly with cold water and rapidly with hot water to liberate hydrogen and the formation of Yb (III) hydroxide.
2 Yb + 6 H2O → 2 Yb(OH)3 + 3 H2

It forms both dihalides and trihalides compound when reacts with halogens like fluorine, chlorine, bromine, and iodine.
2 Yb + 3 X2 → 2 YbX3 (X = F, Cl, Br, I)

It is readily dissolved by strong mineral acids like sulfuric acid, nitric acid, or hydrochloric acid. In dilute sulfuric acid, it forms a solution that contains the colorless Yb+3 ions which exist as nonahydrate complexes. It dissolves in ammonia to form blue electride salts.
2 Yb + 3 H2SO4 + 18 H2O → 2 [Yb(H2O)9]3+ + 3 SO4−2 + 3 H2