What is inductively coupled plasma? 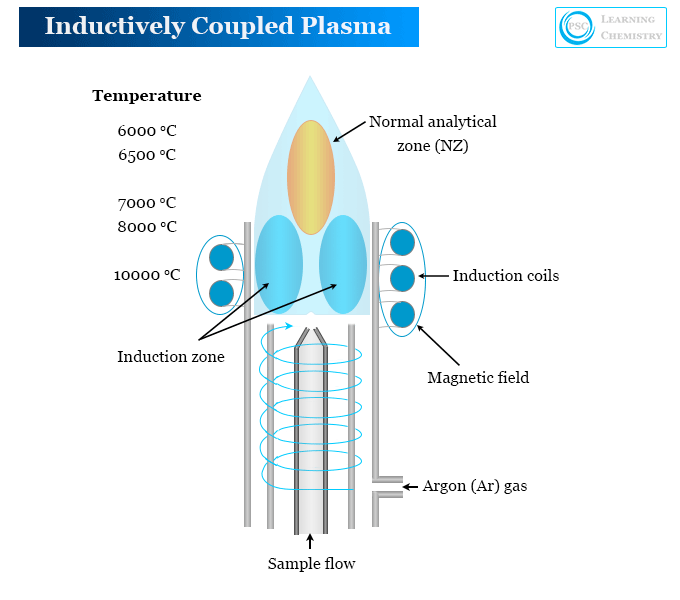 How does inductively coupled plasma work?

Inductively coupled plasma (ICP) is an ionization source that works by decomposing a sample into its constituent elements and ions.

Various stages of the process take place when a sample droplet is introduced into the inductively coupled plasma machine.

Inductively coupled plasma atomic emission spectroscopy and mass spectrometry is a powerful elemental analysis technology capable of analyzing most of the periodic table of elements and chemicals at milligram to nanogram levels.

The instrumentation of ICP-AES is also called inductively coupled plasma optical emission spectroscopy (ICP-OES). It is an instrument that ionizes gases to an electrically conductive state or plasma state of matter. It needs to be operated by a highly skilled person than an AES machine. The detection limit is better in ICP-AES while the detection limit of AES instruments depends on the kind of metals which we analyze.

ICP-AES technology can be used mainly for the analysis of agricultural products, food products, and pharmaceutical products.

In medical science, the ICP-MS instrument is popular for the analysis of blood, urine, plasma, and serum. It is also used for the detection of heavy metal poisoning.

In forensic science, laser ablation-inductively coupled plasma mass spectrometry (LA-ICPMS) instrument is used for analyzing samples found at the crime spot. Hence LA-ICPMS technology analyzes the clothing fibers and glass fragments collected by forensic experts to determine the origin of a material like a manufacturer or brand.

In the environmental field, the ICP-MS instrument is a useful tool for soil, water, and other toxic material analysis.

It is used widely in geochemistry for radiometric dating. For example, to analyze the relative abundance of different isotopes in a particular amount of uranium and lead, we used ICP-MS technology.

In the pharmaceutical industry, ICP-MS instrumentation detects the inorganic impurities in drugs and their synthetic ingredients.

The combination of ICP-MS and size exclusion chromatography give a powerful tool for identifying and quantifying native metal cofactor present in proteins and biomolecules. It is also used to analyze the phosphorylation status of protein molecules.

Atomic absorption or emission spectroscopy can measure a single element at a time but inductively coupled plasma mass spectrometry (ICP-MS) is capable of analyzing all elements simultaneously.

Facts about mercury Mercury is a d-block chemical element of the periodic table with the symbol Hg and atomic number 80. It is a shining...